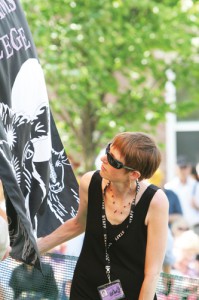 Three things one notices about Carrie Greene during commencement weekend: 1. She moves quickly. 2. She stays cool in the face of unrelenting heat, literal or figurative. 3. She knows exactly how to get 4,000 commencement attendees, students and staff where they’re supposed to be, on time, in order and according to plan.

Together with physics professor and college marshal Jeff Strait, Greene, the college’s academic program coordinator, orchestrates the campus’ biggest annual event. With the assistance of Erica Maker and 40 student ushers, she serves as the commencement point person for nearly a dozen operations, including dining services, facilities and security.

Planning begins in January, when Greene and Strait meet with seniors to discuss class officer elections and the selection of students to serve at commencement as bell ringers, speakers, musicians and marshals, as well as class artist, gardener, historian and poet.

Five months, 25 meetings, 120 phone calls and 750 emails later, Greene arrives on campus at 10 a.m. on June 1 for Class Day, a full schedule of (often overlapping) events that begins with a Phi Beta Kappa induction and ends with a Baccalaureate service. In between, three seniors become Marine Corps officers, athletes are celebrated, graduates receive college and national awards, and singer/songwriter and honorary degree recipient Annie Lennox sits for a special conversation with seniors and their families.

Dashing between events, Greene carries a smartphone, a bottle of water and a small backpack containing a thick folder of information she hardly references. Before Baccalaureate, she’s in and out of Chapin Hall, attending to sound checks, stage preparations and seating assignments. The day goes flawlessly, and Greene heads home at 7 p.m. to get some rest before returning at 6:45 a.m. the next day to do it all again.

On Sunday Greene situates herself near the stage so she can answer questions and keep things moving. Several times she’s overheard genuinely apologizing to folks for the strong sun. A senior shows up late, and Greene dives into the sea of caps and gowns to place her in the right seat mid-ceremony. Later, when commencement speaker and sports legend Billie Jean King emerges from behind the podium with a tennis racket in hand, Greene is again in motion. She’s made sure Elton John’s “Philadelphia Freedom” is cued up, per King’s request, and she sends the head ushers over with two bins of 100 tennis balls. King lobs the balls into the surprised, cheering crowd while Greene ducks and moves quickly out of the way.

“Hold. Top step. Go,” she’ll soon say 527 times, directing graduating seniors up the stairs and onto the stage to receive their diplomas. Later, after the crowd has dispersed, she’ll take a lap around campus to thank every staff member she sees. But right now, she’s busy untangling the Class of 2013 banner, which, once again, has spun around in the breeze.