Ears of a Deer

The Williams College Museum of Art (WCMA) owns 83 prints from Eadweard Muybridge’s massive portfolio of nearly 800 photographic studies of the movement of men, women, children and animals. Published in 1887, the set, called Animal Locomotion, is the capstone of Muybridge’s career as a photographer.

Born Edward James Muggeridge in England in 1830, Muybridge established a photographic practice in San Francisco in 1860. Twelve years later, he attempted studies of the moving horse under the patronage of the industrialist and politician Leland Stanford. The studies brought him international recognition and the commission to carry out the Animal Locomotion project at the University of Pennsylvania. In 1879 he debuted his invention, the zoopraxiscope, a primitive version of later motion picture devices that showed a sequence of still photos in rapid succession.

The prints, including Plate #681, pictured above, a collotype of eating and running deer, became part of WCMA’s collection in the 1960s. The prints are featured on the syllabi of several art history and studio art classes. But faculty in biology, chemistry, comparative literature, geosciences and history also regularly use the Muybridge works in their teaching. 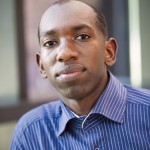 On a fall afternoon a few years ago, inside my dorm room at Deerfield Academy, I started hearing gunshots. The sounds brought back images from my home village in Burundi.