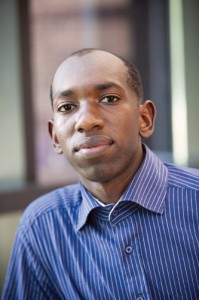 On a fall afternoon a few years ago, inside my dorm room at Deerfield Academy, I started hearing gunshots. The sounds brought back images from my home village in Burundi. This disturbed me. Finally, I covered my ears. From time to time, I would uncover them, hoping the sounds had ended, but the gunshots went on and on.

As dinnertime approached, students started coming out of their rooms, and I joined them in the hallway.

“Were you just watching a movie in your room?” I asked one of my dorm mates.

“No, no!” I said. “I just was curious to know what movie you were watching.”

“It wasn’t actually a movie,” he said. “I was playing video games.”

“Huh,” I thought. I did not ask for an explanation. At the time, I didn’t know what video games were, only that they made noises that sounded like gunfire.

There was a time when silence reigned all over my village. Rivers were loud, but their rhythmic sounds were part of the silence. People worked in their fields with hoes. There were no cars, no factories. I imagine that to Westerners that time and place would have resembled the Stone Age. Planes flew over the village, but never more than once a week.

There was a season that broke this silence. The time of crops growing. From the early stage of the seeds’ sprouting, parents would send their kids into the fields to make noise and chase away the birds that ate the seedlings. This went on for a month, and after that the silence would come again.

I liked it to be quiet, and enjoyed the silence, but this silence did not last. Another season erupted and broke all the silence. It was the season of war. It came in the fall when I was 4, and it lasted for more than a decade.

In this new season, just as in any other, some things died and others were born. Everything was transformed. People moved from their houses to live in the forests. New words appeared—ibinywamaraso (“the blood drinkers”) and ivyamfurambi (“deeds of the wrong first born”)—and new expressions: kamwe kamwe ku ruyeye ku rwembe (“one after another, gently on a razor”). This slogan and others like it said not to worry if you did not kill many people. The secret was only to keep killing.

This new season made children my age wish they had been born blind and deaf so they couldn’t see their houses being burned and their mothers being raped before being killed, or hear the sounds of bombs or their parents screaming and crying. But at other times, you wished you had the eyes of a hawk and the ears of a deer. These were times when you needed to distinguish, in the dark, a black stump with branches from a man dressed in black pointing a gun, or a thin string tied to a mine from a long blade of grass lying across your path. Times when you needed to know that the sound of raindrops falling on leaves wasn’t that of militiamen approaching on tiptoes. For a while you wished for something, and after another while you wished for the opposite. You learned to cover your eyes in the day; you learned to see in the dark.

In the hallway at Deerfield, the boy, whom I’ll call Luke, went on talking about video games as we waited for our classmates to come out of their rooms so we could go to dinner together, as we often did. Almost everything Luke said was so confusing that I asked him: “What do you mean by saying you killed so-and-so?”

“Well, my enemies. Paci, how often do you play video games?”

“Actually, what are they?”

The other students looked at each other and smiled.

“Come on, Paci!” Luke led me to his room. He took up a little device in his hands and turned on his computer.

“These are my enemies.” He pointed at the computer screen, at images of people with guns. “Once you press this button, they start moving and you hunt them, see?” Out of the computer’s speakers came the sound of shooting, the sound of war.

I faced the computer but lowered my eyes. I didn’t want to offend him, but I didn’t want to watch what was happening on the screen. Instead, I watched his fingers moving, handling the device.

I think back to the season of war and know that there are parents elsewhere who would envy the peace that Luke and others like him took for granted, envy the fact, most of all, that these lucky children did not know the true devastation of war. That they only played at violence.

–Pacifique Irankunda ’13 of Bururi, Burundi, was a political science and honors psychology major at Williams. He’ll spend the next several years working for Village Health Programs in Burundi on education reform and the development of mental health services before attending graduate school. The complete version of his essay, a finalist for the Elie Wiesel Prize in Ethics, was published in The American Scholar, Vol. 82, No. 3, Summer 2013.

Read the Companion Article: Ears of a Deer

The Williams College Museum of Art (WCMA) owns 83 prints from Eadweard Muybridge’s massive portfolio of nearly 800 photographic studies of the movement of men, women, children and animals. Published in 1887, the set, called Animal Locomotion, is the capstone of Muybridge’s career as a photographer.