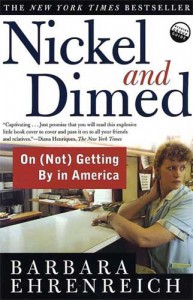 Even before classes began last fall, more than 40 faculty and staff met with first-year students to host discussions about Barbara Ehrenreich’s Nickel and Dimed: On (Not) Getting By in America, this year’s selection for the Williams Reads program. The book recalls the writer’s attempt to understand poverty in America by spending the year working in low-wage jobs and living on her own in cities across America.

First-year students received a copy of the book over the summer to read in preparation for discussions of topics including risk, community and predator pricing. Sarah Bolton, dean of the college and professor of physics, asked the students in her group to consider “what you are willing to risk in order to understand—really understand—the experience of another person.” Gretchen Long, associate professor of history and chair of Africana studies, asked, “How would [Ehrenreich’s] experience have been different if she had lived with other people?” And, focusing his discussion on one of Ehrenreich’s employers during her yearlong experiment, Henry Art, the Rosenberg Professor of Environmental Studies and Biology, asked, “Has your view on Walmart changed?”

Discussion about the controversial book continued throughout the fall semester, with a variety of events including a talk by the author in November and a lunchtime dialogue during Claiming Williams Day in January.

Economics professor Sara LaLumia included Nickel and Dimed in her senior seminar on income distribution in the U.S. Beyond the theoretical lenses for measuring poverty that her students typically study, the book added another dimension—“a human element,” says LaLumia, that “provided the chance for more politically charged conversations than we would otherwise have had.”