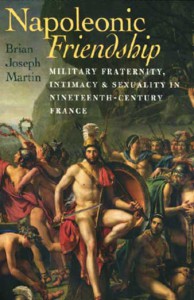 What might the historical and literary records of 19th century France have to tell us about gays in the military?

Growing up watching war films with his military father, Brian Joseph Martin says he saw how soldiers survived the hardships of combat by “relying on the affectionate care of their buddies and comrades in the trenches.” Later, studying French language and literature during the “gays in the military” debates in the early 1990s, he began to recognize these “bonds of soldier friendship” as a “ubiquitous and self-evident fact of military life,” from medieval texts to contemporary film.

Echoing the historical record of gay soldiers in the U.S., Napoleonic Friendship is the first book-length study on the origin of queer soldiers in modern France. It was also one of the first books published on gays in the military following the repeal of “Don’t Ask, Don’t Tell” in 2011.

Currently on sabbatical in Québec and France, Martin is at work on his next book project, tentatively titled Lumber Literature. Moving from the homosocial life of military camps to the masculine camaraderie of lumber camps, this new book looks at a “largely unexamined figure of literary representation: the forester, logger or woodsman,” he says, “from 17th century French fairy tales like Little Red Riding Hood to the 19th century Québécois legend of Paul Bunyan and his 20th century migration to American folklore.

“At a time when the planet is menaced by the effects of deforestation and global climate change,” he adds, “I hope that this examination of the wooded past might offer some perspective on what we hope will be a greener future.”

“Napoleon wept. On the eve of the battle of Wagram, during his Austrian Campaign in the spring of 1809, the Emperor received word that his longtime friend Marshal Jean Lannes had been gravely wounded on the battlefield at Essling. … Napoleon’s public grief at the death of Jean Lannes represented a new model for social relations between soldiers in early nineteenth century France.”–from Brian Joseph Martin’s Napoleonic Friendship

In March Professor Brian Joseph Martin will accept the Wylie Prize at New York University’s Institute of French Studies, where he’ll also give a guest lecture titled “Queer Napoleon: From Napoleonic Friendship to Gays in the Military.”