A Perspective on the Papacy

Williams » Today: Magazine » Spring 2013 » Study » A Perspective on the Papacy 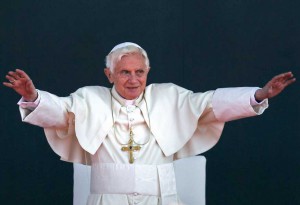 The resignation of Pope Benedict XVI on Feb. 28 was a dramatic moment in the history of the Roman Catholic Church and of the papacy, and few people know that history more deeply than does Williams President Emeritus Francis Oakley. An esteemed scholar of medieval political thinking and church history, Oakley shares his views on the current news as seen through a historical lens.

Oakley on precedence… The real precedent, which seems quite analogous to Benedict’s resignation as pope, is that of Celestine V in 1294. He was a hermit, lived all his life in a cave. At the time of a protracted papal vacancy—the church was having a great difficulty in making an appointment—the cardinals dug him out and appointed him. Though a rather saintly figure, he was utterly unprepared for the task and overwhelmed by it. As a result, he resigned after about three months amid mounting chaos. In resigning, the statement he made was not dissimilar to that of Benedict XVI—in effect, he acknowledged that he was in over his head. He couldn’t discharge the heavy responsibilities thrust upon him. Interestingly, Benedict has some sort of veneration for him. Apparently he has visited Celestine’s tomb three times. It seems reasonable to think that resignation may have been on his mind for some time.

On rewriting history… The Catholic Church has an ancient tradition, but it is, oddly, a remarkably presentist institution, and that preoccupation with the present casts a long shadow over the past. As a result, its history tends to be rewritten to bolster present-day policies and beliefs. The official list of popes is a good example of that process. As a precedent for Benedict’s resignation, commentators have pointed to that of Gregory XII in 1415, but in Gregory’s case there was a very complicated micro-politics involved. As far as I’m concerned, he was simply a claimant to the papacy at a time when there were three lines of claimants. He happened to be the Roman claimant, but it is only since around the time of the French Revolution that the Vatican has moved consistently to rehabilitate the Roman line and to claim retroactively that it had been the true line all along. Insofar as historical evidence counts, that is simply not correct. At the time of the disputed election of 1378, no one knew who the real pope was; that is why there was a crisis. Moreover, Gregory XII and his opposite number in Avignon were both deposed in 1409 by the Council of Pisa, which then elected Alexander V. For a while it looked as if that would succeed in ending the schism. Then Alexander, who was well respected, died suddenly and was succeeded by John XXIII, who was not. He turned out, in fact, to be a somewhat corrupt figure. In 1415, as a result, and even though it viewed him as the true pope, the Council of Constance deposed him as a criminal. Though it viewed neither Gregory XII nor his Avignonese rival as legitimate pope, in order to clear the decks it offered both of them a chance to resign. The Avignonese claimant declined the offer and, as a result, was deposed. Gregory XII went along with it and by doing so saved himself from a similar fate. There’s a sort of Orwellian aspect to the way in which this whole confused piece of history has been handled in the official histories ever since the First Vatican Council in 1870. Even the currently official list of popes (which dates only to 1947) is in some degree an ideological statement. It lists both the Avignonese and Pisan lines as antipopes, a judgment historians have been unable to make. But outside sources such as the Encyclopedia Britannica have bought into it.

On demystifying the papacy… So far as Benedict is concerned, I take his statement about why he is resigning at face value. He’s old, clearly not well, and, after all, he watched his predecessor hang on disastrously when he couldn’t do the job out of some sort of misplaced mystification of the papal office. This led to factions, chaos, all the rest. So I think it does Benedict credit to make this move, and I think it will have a demystifying effect on what is, after all, an administrative job. That would be healthy. The pope is not a super-priest. He’s just a bishop like other bishops. What distinguishes him is simply the preeminence of his administrative and teaching role.