A Closer Look... Running the Show 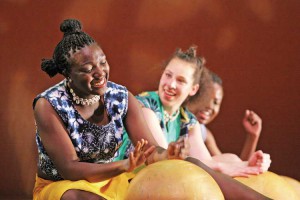 It’s a dark, chilly night outside the ’62 Center for Theatre and Dance. The front lobby and main hallway are eerily quiet; just a few students pass through on the way to dinner. But open a door to the backstage area, and a riot of sound bursts out.

Rhythmic pulses emanate from an MP3 player in the women’s dressing room. Doors swish open and slam shut. Nervous laughter erupts from the groups of performers scurrying back and forth between the dressing rooms, the MainStage wings and the stage itself.

It’s the start of “tech week,” and 101 performers from the dance department’s four companies, their accompanists and the marimba band will spend 20-plus hours over the next four nights running through every aspect of their late November/early December show. There are lots of moving parts—and still much left to iron out before the curtain goes up for the All Companies Concert on Friday and Saturday nights.

Snippets of frenzied conversation rise above the din:

“We need scissors for the belts!”

“Can you tell me what size this is?”

“Homework? Do we have time?”

“Who has what colors?”

“There’s this new step in the dance!”

The students aren’t merely learning the latest choreography or song lyrics in preparation for the performances. They’re also playing a central role in running the show—managing lighting and scenery and setting up chairs and instruments for their fellow performers. And many have never done these things before.

Initially, it appears that chaos reigns. But watching Mary Pfister, production manager for the dance department for nearly 10 years, it’s obvious that a meta-choreography is taking place. She and the other professionals working during tech week keep rehearsals moving with a crisp efficiency and a wicked sense of humor.

“You’re going to work on this, right?” Pfister calls out over the noise after members of Sankofa, the college’s step team, flub a curtain call and exit the stage. “Hint, hint!”

She switches gears and turns her attention to the marimba band, which has changed its set-up and is engaged in an impromptu jam session at stage right. “Hey!” Pfister calls out. “Are these spikes in front or back?”

Throughout the rehearsals, the refrain “Thanks, Mary!” follows each group filing onto and off of the stage.

“We just do what Mary tells us,” says Iman Lipumba ’14, an Arabic studies and religion major who dances for Kusika, the African music, dance and storytelling troupe now hustling onstage. “That’s tech week.”