A KIND of Justice

Growing numbers of undocumented immigrant children are crossing into the U.S. alone and finding themselves caught in a legal tangle. A trio of Williams alumni is working to help them navigate the system. 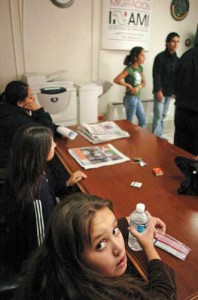 The defendant’s hair was in pigtails. She wore a red dress and warm Ugg boots, and she clutched a doll as though it was her most prized possession.

“You could barely see her head above the table,” says Wendy Young ’83, who was in the Baltimore courtroom that day last summer. “The judge asked her a few questions while she looked at him silently, obviously confused and frightened. The only question she was able to answer was the name of her doll.”

The 5-year-old had been charged with entering the U.S. illegally, a violation of federal law she could barely understand. She was too scared and intimidated to talk. But a pro bono lawyer working on behalf of Kids in Need of Defense (KIND)—a national legal advocacy group serving immigrant children—persuaded the court to grant the girl legal status through the Special Immigrant Juvenile Program for children who have been abused, abandoned or neglected.

While the moment was dramatic, it was far from unusual. Prosecutions of young, unaccompanied immigrants have surged over the past year or so, with more than 14,000 children facing deportation proceedings in 2012—about double the number from previous years. Few of them have legal representation, and some 40 percent end up being sent back to their home countries, says Young, the founding executive director of KIND. Often these children are returning to places of dire poverty, brutal violence and escalating drug problems.

But three Williams alumni—Young, journalist and advocate Sonia Nazario ’82 and attorney Richard Berney ’82—have joined forces to raise awareness of the issue and offer assistance to undocumented immigrant children caught up in the system.

The surge of unaccompanied minor immigrants contrasts with the nation’s overall immigration flow, which slowed sharply as economic opportunities in the U.S. dried up in the Great Recession. Officials estimate that as many as 50,000 children, most from Mexico and Central America, crossed the border last year without a parent or guardian and without documentation. Fewer than a third of them were caught by border agents. Some children come to reunite with parents who left them behind in search of work. Others are fleeing drug- and gang-related violence in their neighborhoods.

The children form a slice of the broader—and politically inflamed—issue of illegal immigration, including an impasse over the DREAM Act, a legislative plan that would create a six-year path to citizenship for undocumented residents who entered the country at age 15 or younger and meet other criteria. Also making headlines are a set of immigration reforms proposed by the president and a bipartisan coalition in the U.S. Senate, which are expected to come to a vote in late March.

On the state level, nearly 1,000 immigration-related bills were introduced and 156 laws enacted in 2012, according to the National Conference of State Legislatures. And the U.S. Supreme Court ruled in Arizona v. United States over the summer that federal law preempts most of the provisions of Arizona’s stringent immigration enforcement laws.

Amidst all the political controversy, Young says, undocumented youths continue to pose difficulties for immigration courts around the country. Some of the immigrants are infants or toddlers, and few of any age understand what’s happening to them when they get caught up in the legal system. Unlike in criminal courts, the young defendants have no right to an attorney during immigration court hearings to determine whether they can stay in the U.S. or will be deported. 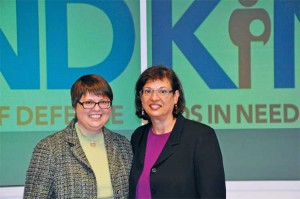 That’s where KIND comes in. Founded in 2008 by actor Angelina Jolie and Microsoft, KIND serves as a resource and matchmaker for the detained youths and pro bono lawyers working in large law firms, corporate legal offices and law schools. Young oversees a staff of 27 in seven field offices that support more than 5,000 volunteer lawyers from 130 law firms and corporate legal departments and about 20 law schools.

“A lot of law schools have clinics, and immigration’s a popular area for schools to develop a clinic in,” Young says. “Students, if they’re under the supervision of a lawyer, are allowed to actually practice in immigration court, which is unusual.”

KIND’s offices are scattered among cities where immigration is a persistent issue: Los Angeles; Houston; Washington, D.C.; Baltimore; Newark, N.J.; New York City; and Boston. There’s also an “affiliate” office in Seattle, and the organization is looking to expand to Dallas and Atlanta.

One hurdle volunteers face is that most aren’t versed in the details of immigration law, which Young says can be as inscrutable as tax law.

“You really need to know how to navigate the system, and that’s what my staff does for the volunteers. They support them and help them as they represent the child,” she says. And it makes a difference: Kids with lawyers at their sides during their hearings are three times more likely to win permission to stay.

Young, a fourth-generation Williams alum who grew up in Saranac Lake, N.Y., first became interested in immigration issues while in high school, when Haitian boat people fleeing to the U.S. were detained at federal facilities near her hometown. “My French teacher used to go in and teach them English,” she says. “So I became aware of refugee issues early on, and I always wondered about these poor Haitians ending up in jail in Saranac Lake.”

She spent her junior year of college as a U.N. intern in Vienna and, through another Williams program, taught English in Japan for two years after graduation. “I started getting interested in human rights work literally from the day I started college,” she says. “Williams really connected me to the rest of the world.”

After returning from Japan, Young earned a joint law degree and master’s diploma in international relations from American University in Washington, D.C., and then went to work for a think tank focused on refugees before joining up with the National Council of La Raza, a Hispanic civil rights group. She eventually worked for the Office of the U.N. High Commissioner for Refugees and for U.S. Sen. Ted Kennedy as an immigration expert.

After she joined KIND’s staff four years ago, Young became a key resource for Nazario, who was writing stories about immigration at the L.A. Times. In 2003 Nazario won a Pulitzer Prize for her six-part series “Enrique’s Journey,” which she expanded into a critically acclaimed book of the same title. The project followed the migration of a young Honduran boy who rode the tops of freight trains north in an effort to find his mother, who’d left him behind 11 years earlier. Nazario retraced Enrique’s steps by riding atop the trains with boys as young as age 7 who faced bandits, armed gangsters and the threat of falling off—or under—the trains.

Nazario’s journalism, for which she received a Bicentennial Medal from the college in 2004, moved her into the role of advocate. Now a board member of KIND, she often speaks on immigration issues to colleges and activist groups, and she spreads the word about KIND’s work to law firms and other gatherings of lawyers.

“It helps that I have an immigrant background,” says Nazario, the daughter of an Argentine father with Syrian roots and a Polish mother who migrated to Argentina as a young girl with her Jewish family. Nazario’s parents married in Argentina, moved to Wisconsin, where Nazario was born, returned to Argentina until she was 6 years old and then moved to Kansas.

Nazario’s father died when she was 14, and her mother moved the family back to Argentina. By then, in the mid-1970s, the country was in the throes of the “Dirty War,” in which the military regime arrested and “disappeared” tens of thousands of Argentines, including friends of Nazario. She decided to become a journalist the day two neighbors, newspaper reporters themselves, were killed in the street outside her home in Buenos Aires. Within two years, she and her family returned to Kansas.

“Having lived through the Dirty War, and having friends of mine disappear,” Nazario says, “I can really empathize with what a lot of Central Americans have been through and what’s driving them to leave.”

These days more and more children are making their way to the U.S. as a result of increasing gang violence in their home countries, particularly those in Latin America. Ironically, much of the increase in gang recruitment and activity is rooted in Latino gang culture displaced from barrios in Los Angeles and other American cities. “If you’re a 12-year-old boy” in Central America or Mexico, Nazario says, “they forcibly tattoo you or they say, ‘You either join with us or we’re going to kill you or your family or we’ll rape your sister.’”

In a new pilot program, KIND hopes to help children who’ve recently been deported—and those who never left—to navigate their own neighborhoods more safely by establishing a presence in Guatemala, in cooperation with Guatemalan authorities. The idea is to help deported kids resettle in their neighborhoods with everything from educational support to family counseling. “Basically anything that helps the child to remain home safely,” Young says.

But the bulk of KIND’s work is in American courtrooms, with a growing cadre of lawyers, like Berney, stepping forward to offer expertise. A real estate attorney at the Cozen O’Conner law firm in Manhattan, Berney saw an update about Nazario in an issue of Williams People that mentioned KIND, and the nature of the organization’s work struck a chord. Berney’s firm, which employs more than 500 lawyers in 23 offices around the country, encourages staffers to do 60 hours of pro bono work per year. After getting in touch with Nazario, he started recruiting his colleagues to join KIND’s bank of volunteers.

So far, Berney says he’s matched up about 10 colleagues from the firm’s Manhattan office with KIND. Combined, they put in as many as 300 hours per year aiding detained youngsters.

With the number of children crossing the border showing no signs of abating in the future, the need for volunteers to help them in the courtroom is even more acute.

“They’re struggling to meet this demand for all these kids,” Nazario says of KIND, adding that the issue is not immigration but rather access to legal representation. “I think that most people can agree that, whatever your politics are, kids shouldn’t have to represent themselves in an immigration court in this country.” 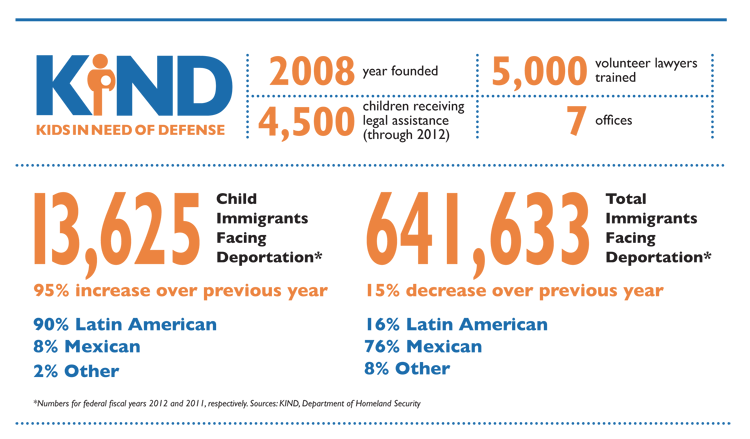 –Scott Martelle is a veteran journalist based in Irvine, Calif., and the author, most recently, of Detroit: A Biography.