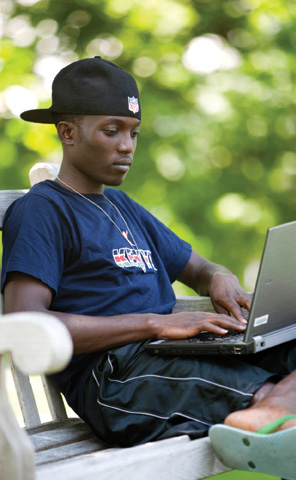 Nate Kornell, assistant professor of psychology, has received a $600,000 grant from the James S. McDonnell Foundation to conduct research on students’ study habits.

With the grant, Kornell, along with a postdoctoral fellow and an associate researcher, will be conducting dozens of online and laboratory studies to examine the kinds of decisions students make while studying—including how best to allot their time, how much time to spend and what methods best enhance memory retrieval.

The title of the project—“Improving Self-Regulated Learning”—is also its long-term goal: to help students understand and develop more effective studying strategies. “Only a small fraction of students study based on evidence-based principles,” Kornell says.

The four-year project builds on Kornell’s and others’ past research. “I’ve found that studying all at once is not as effective as spacing study sessions out over time,” he says. “I’ve also found that taking a test is a very effective way to learn, even if you can’t think of the correct answers on the test. Findings like these can be counterintuitive, so there’s often a mismatch between what students choose to do and what they should do.”

Kornell, who received a B.A. from Reed College in 1996 and a Ph.D. from Columbia University in 2005, has authored dozens of publications about learning and memory as they relate to education, the most recent one being an article in the 2013 Annual Review of Psychology titled “Self-regulated Learning: Beliefs, Techniques and Illusions.” He also maintains a blog on Psychology Today’s website: “Everyone Is Stupid Except You: The Truth About Learning and Memory”. The blog follows current psychological studies.

The James S. McDonnell Foundation, through its 21st Century Science Initiative, funds projects that seek to improve teaching and learning through the application of cognitive principles.