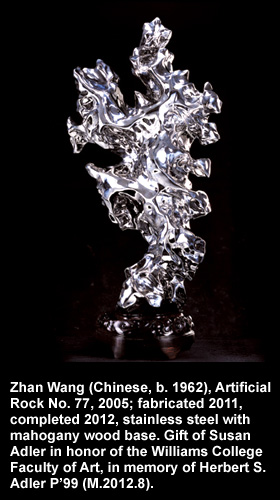 A recent gift to the college of a Zhan Wang sculpture will bring the ancient Chinese tradition of “scholar’s rocks” to the 21st century—and to Williams’ new library.

Confucian scholars began as early as the 8th century to place the ugliest, strangest-looking rocks they could find in their gardens to gaze upon in contemplation, says Williams professor of art Scarlett Jang. “This love of the strange, the bizarre, the extraordinary and the ugly came from the fact that these qualities denote individuality and originality,” she says.

Wang’s four-foot sculpture Artificial Rock No. 77, which was commissioned by Williams parent Susan Adler, transforms the notion of “rock” by hammering stainless steel onto the surface of the stone and making it shine as bright as chrome. By imitating a natural rock and yet “creating a glaringly artificial construction,” Jang says, the artist “confirms the power of zaohua,” which is the most original creation of the metaphysical principle underlying the physical world, or nature. Zaohua is a quality symbolized by many ancient scholar’s rocks, Jang adds.

When the new Sawyer Library opens next fall, Artificial Rock No. 77 will grace the historic, two-story Stetson reading room, to inspire scholars for years to come.