A New Approach to Neuroscience

A mouse is hungry, so it eats. If it’s thirsty, it drinks. If it’s tired, it sleeps. And while these behaviors appear to be carried out with very little thought on the mouse’s part, a complex process is taking place in its brain, telling it what to do. Assistant professor of biology Matt Carter is working to better understand that process. 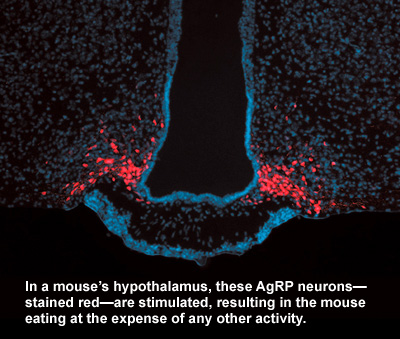 A neurobiologist, Carter’s latest research, published in the October issue of Nature, shows that specific regions of the brain control motivational behaviors in mice related to food intake. For example, Carter identified a brain region that suppresses appetite. When these specific neurons are stimulated, mice stop eating even if they haven’t eaten in hours or days. When the neurons are inhibited, mice will eat more than usual.

Carter carried out the research using a cutting-edge technique, new to Williams, called optogenetics, developed by scientists at Stanford University a little less than a decade ago. At the time, Carter was working in a lab just down the hall from the researchers, completing his Ph.D., and he was among the first to use optogenetics with living creatures.

The technique involves altering a mouse’s DNA to allow specific neurons to become light sensitive and then implanting optical fibers through which light can be flashed—blue to stimulate the neurons, yellow to inhibit them. The effects are temporary. “It’s kind of like operating a remote-controlled car,” Carter says. “At the touch of a button we can turn neurons on or off and observe how a freely moving mouse behaves.”

Unlike any tool used previously in neuroscience, optogenetics is both spatially and temporally precise, targeting the exact neurons involved in a behavior for the exact amount of time necessary to see the effects. “With the older technique—zapping a neuron with electricity—you ended up zapping all the neurons in that region,” Carter says. “Or you injected a drug into the brain to inhibit or stimulate neurons, but the effects lasted for minutes or even hours at a time. With optogenetics you can stimulate or inhibit neurons at millisecond resolution.”

Carter says optogenetics has the potential to be used as a therapy in the future. Making neurons in the brain respond to light could have implications for treating the blind. The ability to stimulate or inhibit specific neurons also could help relieve symptoms of movement disorders such as Parkinson’s disease or prevent seizures in patients with epilepsy. Optogenetics might also be used to shed light on how, exactly, drugs work on the brain or to develop new treatments for various neurological disorders.

In the meantime, he and several Williams students are digging deeper into brain functions related to motivational behaviors. One thesis student, Manasi Iyer ’14, is using optogenetics to investigate which neurons in the brain might promote wakefulness and inhibit sleep.

Another thesis student, Allison Graebner ’14, is delving into thirst, a relatively unexplored behavior. It’s one of the first motivational behaviors humans lose as they age, Carter says, and he wants to understand why. “The body always needs water,” he points out, “but for some reason as we get older, our motivation to drink water declines. Why? And how does the brain motivate us to consume water in the first place?”