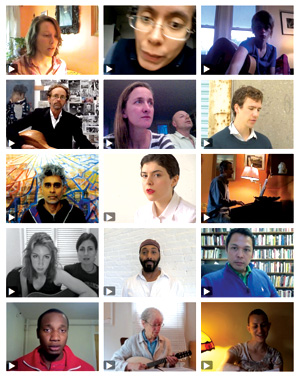 For years art professor Laylah Ali ’91 has been captivated by the history of John Brown, the white abolitionist who took up arms to end slavery and was hanged in 1859 for crimes including treason and inciting slaves to rebel. But it wasn’t until the Dia Art Foundation commissioned Ali to do a web-based project that she saw a way to create something about Brown and his legacy.

Brown was eulogized in the folk song “John Brown’s Body” (a tune that Julia Ward Howe adopted for her song, “The Battle Hymn of the Republic”). Ali—a painter who has had solo exhibitions at the Museum of Modern Art in New York, the Museum of Contemporary Art in Chicago, MASS MoCA, and others—imagined a video clip of a single person singing the song as an introduction to her web-based project for Dia, which seeks out artists who don’t already use the web as a medium for commissions such as this one.

But when the initial singer was no longer available, Ali decided to extend the invitation to a wider group. She asked relatives, friends, former students, colleagues and even acquaintances to videotape themselves and send her the results. “The invitation to sing was a question about the song and a question about our relation to that time, to slavery, to abolition and our distance from it,” Ali says. “Abolition, formerly a charged and dangerous political stance, is such an antique word now.

I wondered if I could find meaning in this strange old song through asking people who might know nothing about John Brown to sing it.”

The final project features 19 video clips of people singing “John Brown’s Body” and an endnotes section of material related to the song. Says Ali: “I see this project more as a series of questions rather than a statement.”

The remainder of the fall 2020 semester is taking place remotely. See our Covid-19 website for strict health and safety protocols for those who remain on campus. All Williams College buildings are closed to the public and visitors until further notice.