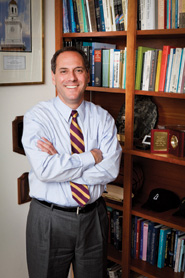 Fall brings each year an odd juxtaposition. It’s the season of college rankings, in the middle of which we honor members of the Williams family with Bicentennial Medals. Both say something about the value of a Williams education, or at least try to.

Williams fares extremely well in the rankings (yes, we’ve come first again in U.S. News). But these exercises tend to emphasize how much money we spend and how much money our graduates make—and the extent to which they follow certain career paths. So while our prominence in rankings is a point of understandable pride among alumni and students, the praise inherent in them rings hollow.

A more clear-eyed view of what we’re about emerges from the Bicentennial Medals ceremony. Williams exists primarily to expand the public good through the impacts that our graduates have on the world, and the life stories of our most recent medal recipients, like those of their predecessors, make clear the breadth and depth of the college’s effect.

Bill Moomaw ’59 is a global leader in the marrying of science and diplomacy in the effort to combat climate change. Maggie Renzi ’73 and John Sayles ’72 have become the godmother and godfather of independent filmmaking. Mike Weiner ’83, even before becoming a profile in courage, set a model for effective and enlightened labor leadership. Doug Shulman ’89 increased the efficiency and fairness with which the IRS collects the money that fuels our democracy. And Mariam Naficy ’91 has pioneered Internet sales models while empowering designers around the world, most of them women (see page 28).

Believe me, it’s hard each year for us to select a handful of honorees from among the many alumni who are making big differences in their professions and their communities. Whether some of them have also managed to make money is beside the point. Are they listed in Who’s Who? I don’t care.

The stakes in the rankings game may soon increase as the federal government plans to produce its own. I appreciate that the federal investment in higher education is large, that some students are nonetheless poorly served by their schools and that policymakers therefore have a responsibility to protect those students and ensure that federal dollars are well spent. That’s a tricky problem to solve, especially in the political arena.

President Obama and Department of Education officials have assured that colleges will be compared only with peers, but the main input being discussed for these rankings is the average earnings of graduates. Even if there were a non-intrusive way to reliably obtain this information, which so far there is not, it represents an impoverished view of the value of a liberal arts education. Do we really think less of a third-grade teacher or member of the military than we do an investment banker? I hope not. The worth of these government rankings will depend on the details of their design.

Much of what we do at Williams can be counted: how many students take tutorials, earn department honors, are admitted to graduate or professional school, etc. But a liberal arts education, being a humanistic enterprise, can no more be evaluated in a single number than can our personal relationships, our parenthood or our politics.

The value of Williams to the world is instead lived out every day in the full and effective lives of our graduates.