About 23 first-year students pile into a common room stuffed with couches, chairs, tables and a TV. Laughter and spirited discussion quickly fill the air as food is passed around. “Welcome to Snacks,” says one of the two junior advisors (JAs) who live with them in a residential grouping called an entry. “How was your week?”

“Snacks” refers to the food being shared, often as simple as a batch of cookies. But it’s also shorthand for the gatherings themselves—a cornerstone of residential life at Williams—held every Sunday at 10 p.m. in all 26 first-year entries. Conversations can be unstructured, or the JAs might ask first-years to take turns sharing the high and low points of their weeks or telling their life stories.

Meanwhile, JAs are doing important work. They’re paying attention to subtle cues—two close friends who no longer sit together, or someone who consistently avoids conversation—and following up if necessary. Their job isn’t to solve problems but to serve as allies and resources.

As the school year progresses, the snacks, prepared by the first-years, become more substantial (a rotisserie-chicken with homemade mashed potatoes and gravy one week; ginger bread houses another; an ongoing Iron Chef-like competition). The conversations become more substantive, too.

“We discuss our standards, what we expect of our community,” says former JA Louisa Lee ’14, who, with Sam Tripp ’14, is now co-president of the JA Advisory Board. “Frosh are learning to live together. For a lot of kids, college is their first time away from home.”

For many, the campus is also the most diverse community they’ve ever encountered. Each entry is intentionally constructed as a microcosm of the student body. They’re safe places where students become comfortable engaging with and challenging each other—and each other’s assumptions.

“It ends up being very little things that have a big impact,” says Eddie Kelly ’15, a JA in Armstrong. “Like the way we use language. We have standing rules: Respect each other. Check yourself.

“Tripp remembers two students in his entry last year. One, from Jordan, was “very pro-Palestine,” he says. The other, from Pittsburgh, was “very pro-Israel. They had some very heated debates. But they’re still really close friends. They didn’t ever agree—they just actively wanted to learn from each other.

“JAs are full of similar stories from Snacks: the conservative kid from the South who was drawn into a conversation about gay marriage; the home-schooled kid who was having a tough time adjusting to dorm life; the kid who didn’t seem to take anything seriously but one day opened up about his father’s struggle with cancer.

“You see the Williams community develop during Snacks,” Lee says. “We embrace diversity, and we are all different. Snacks pairs real faces and stories with those kinds of values.” 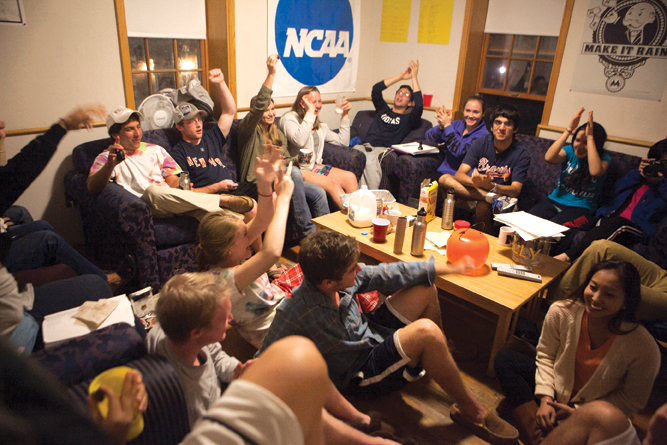