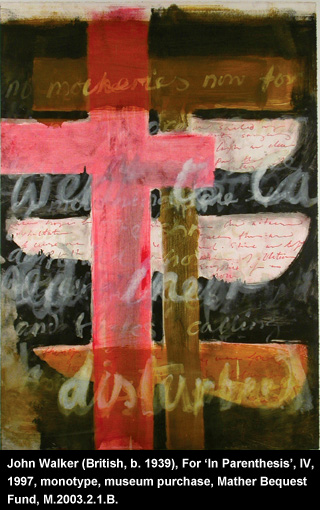 John Walker is a painter and printmaker born in England in 1939. His father and 10 family members fought in World War I, and Walker’s father was the only one to survive the ordeal. Growing up, Walker listened to stories of his father’s experiences that later shaped his own identity and, a decade after his father’s death, his art work.

Walker’s triptych For ‘In Parenthesis’, IV, part of the Williams College Museum of Art’s collection, conflates the stories he heard in his youth with David Jones’ epic 1937 poem, “In Parenthesis,” about World War I. Jones’ poem, in turn, references the bloody Battle of Catraeth fought around 600 A.D. as well as Wilfred Owen’s World War I poem “Anthem for Doomed Youth.”

In Walker’s work, looming crosses, reminiscent of the acres of cemeteries left after the war in France and Belgium, mingle with poetry on color fields of brown and red. He cites the passage from Jones’ poem:

Walker’s work blends figural and abstract tradition. The images evoke war and death but also represent a layered view of the artist’s mind that connects to his childhood, his family and his English identity.