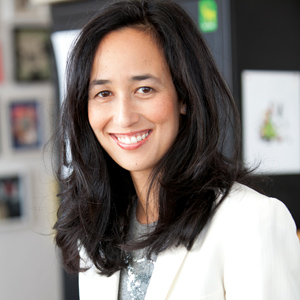 Mariam Naficy ’91 was weeks away from pulling the plug on her Internet startup company, Minted.

The business, launched in April 2008 to sell paper goods from major designers, had made just one sale in its first month.

Poring over the analytics, however, she discovered an unexpected sign of life. Minted had hosted an online competition for independent artists to create a “save-the-date” card. More than 60 designs were submitted, and the company’s initial orders were coming from the 22 winning designs.

Naficy and her team quickly changed gears, turning Minted into a community-driven marketplace based on design competitions—a model called crowdsourcing. Today, the company does a “substantial eight figures” in sales, Naficy says, with indie artists called “Minties” earning more than $1.5 million in prizes and commissions.

Lightning rarely strikes twice, and in such a spectacular way, in the Internet world. But Naficy—who in 2000 sold her first company, the online cosmetics giant Eve.com, for more than $100 million—has proven herself to be a nimble businesswoman, adept at spotting trends and opportunities.

On a sunny fall day in October, Naficy sits in the company’s San Francisco headquarters—a converted warehouse space with floor-to-ceiling windows, chic furnishings and framed designs hanging on the walls. After a meeting with staff and a panel of Minties, she says something that at first seems counterintuitive: “I don’t see myself as a huge risk taker.”

Describing her business strategy, she adds, “I see myself as taking one risk early and then doing everything I can do to minimize and manage the risk in the situation from then on.”
In Silicon Valley, women launch about 3 percent of tech startups. And fewer than 7 percent of startups have female CEOs. But Naficy says she became an Internet entrepreneur “because I’d have much more opportunity to make my own way. It doesn’t matter who you are—if you’re a woman, if you’re a minority. If [consumers] like your product, it’s going to sell.”

So far, she’s been right. In 2010 Fortune magazine named her one of the Top 10 Most Powerful Women Entrepreneurs. Minted has been featured on The Today Show and in Martha Stewart Living and Real Simple magazines. Naficy is on the board of Polyvore, an immensely popular community-powered fashion website. And in September she was presented with a Williams Bicentennial Medal for distinguished achievement.

The eldest daughter of an Iranian father and a Chinese mother who met as graduate students at Georgetown University, Naficy grew up traveling between the U.S., the Middle East and Northern Africa, attending English and American schools. Her father was a development economist. “So we were always in developing countries that were unstable,” she says. “War, revolution, things like that would cut our time short.” 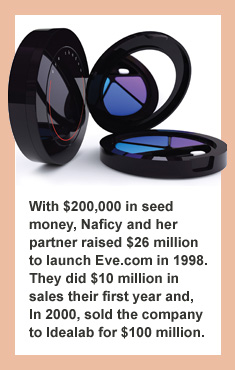 The family expected to settle permanently in Iran. But during the revolution of 1979, when she was 9 years old, they were forced to flee like many others. “My dad took me out in the street, and I took pictures the night of the revolution, the night the Shah left,” Naficy says. “People thought it was jovial, a lot of fun. They were expecting it to be a temporary thing.”

The family ultimately moved to the U.S., and Naficy found her way to Williams, where she majored in political economics. During her junior year, she learned that recruiters from investment banks were visiting campus to conduct interviews. It was the first time she’d considered business as a career option, and she came out of the interviews with several job offers.

She accepted a position at Goldman Sachs in New York, assisting small companies seeking private investors. The fast-paced environment opened her eyes to the inner workings of a massive, multinational firm.At the time she was dating Michael Mader ’90, whom she met at Williams and later married. When Mader was transferred to San Francisco (he is now the VP of marketing and analytics for Gap Inc. Direct, the clothing retailer’s e-commerce division), Naficy went with him. “I ended up smack in the middle of the Bay Area right before the Internet boom,” she says.

She went to work as head of marketing for Maurice Werdegar, a prominent Silicon Valley investor and serial entrepreneur. “I sat in his office all day long and learned to run a business,” she says. “It was one of the best educational opportunities I was ever going to have.”

She also knew she needed a career change. “I thought, if I go back into consulting or banking, I don’t think I’ll get anywhere near the responsibility I deserve,” she says. “I could do better working for myself.”

She enrolled in Stanford Business School to formally learn the skills needed to build her own venture. To help pay for school, she published a handbook for undergraduates in 1997, The Fast Track: The Insider’s Guide to Winning Jobs in Management Consulting, Investment Banking and Securities Trading, which sold 50,000 copies.

Her idea for a startup: to sell cosmetics online. Naficy says she spent a lot of her high school years reading fashion magazines and shopping in malls. “I wore a lot of makeup,” she says with a laugh. The experience gave her a keen eye for spotting trends; “Consumer psychology was what I was really doing,” she says. “I just didn’t know it.”

With a former roommate from New York who was finishing an MBA at Harvard, Naficy developed the plan for Eve.com. Initially, investors were bewildered. The idea of buying any product online—especially cosmetics, where brick-and-mortar stores dominated the market—seemed ludicrous.

But the risk paid off. With $200,000 in seed money, she and her partner raised $26 million and launched the company in 1998. By the end of Eve.com’s first year it had done $10 million in sales. Fortune named it the sixth-best e-commerce site on the web. And brands like Calvin Klein and Elizabeth Arden signed on to distribute their cosmetics and fragrances through the website, which received nearly double the traffic of its closest competitor, Sephora.com.

In 2000, with the Internet bubble about to burst, Naficy, then 29, and her partner sold the company for $100 million to Idealab, which later sold it to Sephora. Today, online cosmetic shops generate some $3.8 billion in sales annually.
After the sale of Eve.com, Naficy and Mader took some time off to travel. Naficy returned home craving a new challenge and wanting to hone her managerial skills. “I needed to figure out how big companies handle problems, how they run processes, how to manage other people,” she says. “Eve.com went from zero to 120 people in six months. I needed to understand human resource policies.” 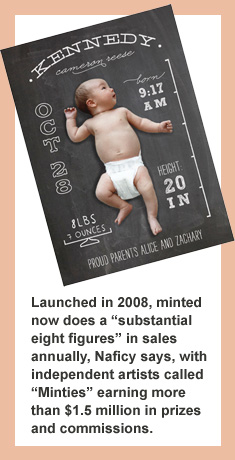 So she joined The Body Shop as VP and general manager of e-commerce, selling products for the body, face, hair and home. When the startup bug bit again, the idea for Minted was born.

When Minted launched in 2008, consumers were spending billions of dollars buying stationery online. Yet no single company dominated the market. In a recent interview for the “Fail Week” series on the website TechCrunch.com, Naficy said, “Everyone, including a prominent Stanford Business School professor, was telling me that selling paper online was a bad idea.”

By then the mother of a young daughter (she now has two children), Naficy says she was “the prototypical Minted customer: The busy mom who doesn’t want to give up on style—who wants to have beautiful holiday cards, throw a beautiful party or have beautiful art on the walls.”

She had a soft spot for indie artists who otherwise might not get their designs to market. And once the company was reoriented to focus on crowdsourced design, a business model pioneered by the successful t-shirt company Threadless, Minted took off.

Through its competitions—114 to date—Minted has built a community out of thousands of artists from 43 countries who submit designs and offer feedback to each other. Some are formally trained, but many are self-taught, like Lauren Chism of Dallas, an accountant with a creative streak who learned about Minted on a blog. Chism began submitting pieces in 2009 and, in 2011, had enough design work to leave her job and launch a full-time invitation studio. Today, about half of her workload and commissions come from Minted sales.

Brandy Brown, a stay-at-home mom from Seattle with no formal design training, has had her birth announcements featured in Pregnancy magazine. She calls Minted “the Facebook of design. I feel inspired, influenced and nurtured by the community.”

In working with the Minties and her 100-plus employees, Naficy says she often returns to a lesson she learned at Williams. “You have to be very clear about what you want in your life,” she says. “Set your own expectations, and you can lead yourself down a path of satisfaction.”

Brittany Shoot is a San Francisco-based journalist writing for magazines including TIME, San Francisco and Mental Floss, where she’s a contributing writer and columnist.

Photo of Mariam Naficy by Elisabeth Fall.
“Chalkboard Stats” invitation by Someone Like You (Leslie Hamer), courtesy of Minted.
Print this page