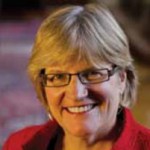 A. Clayton Spencer ’77, who has served on the Williams College board of trustees since 2003, was elected president of Bates College in December. Spencer currently serves as vice president for policy at Harvard University and has worked for four Harvard presidents to shape key initiatives over the past 15 years. She also was chief education counsel to the U.S. Senate Committee on Labor and Human Resources, working for the late Sen. Edward M. Kennedy. In 1997 she received a Bicentennial Medal from Williams for her achievement in the field of education policy. Spencer will begin her tenure as Bates’ eighth president on July 1.