On Expectations and Change 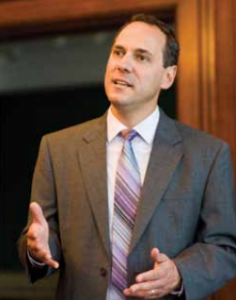 As the legacy of legendary professor Bob Gaudino reminds us, learning is often most powerful in times of discomfort and even pain.

I’m reminded of that as the Williams community has been responding to the discovery of a horrible, racist message on a wall inside Prospect House. Photos of the events that followed, along with directions to fuller coverage, are on p. 7.

As the investigation into that incident continues, the college is engaged in serious conversations about larger campus issues and social challenges, having learned more fully in the wake of this one act the extent to which instances of discrimination happen here, as they do everywhere.

We have seen a powerful and thoughtful response among a broad cross-section of students, faculty, staff, alumni and parents, and I’ve benefited from the resulting deeper sense of the college’s cultural evolution over the past half century.

We at Williams expect a great deal from each other and from this place, and we do not shirk from holding ourselves to higher standards than we see in our society at large. When our expectations aren’t met, it rightfully upsets us. We know racism exists in America, and we know race is an issue that’s too rarely talked about honestly and productively. But that’s not what we want for Williams. Our aim, as I said in my remarks at an all-campus forum Nov. 14, is a Williams community that is free of racism, free of sexism, free of homophobia, free of fear. There’s nothing we can aspire to that is more important to who we are and to what Williams is. The idea, of course, is not only to create that community on campus but also to foster in all of our students the sense that they can then go out into the world and make it a better place. That is how Williams, over time and over generations, brings change to society as a whole. I’m confident that by harnessing our currently heightened energy we’ll effect a more rapid evolution of our college culture toward the day when the slights and injustices we’ve learned about recently are things of the past. The work of fully realizing the community we aspire to is urgent, but for all our commitment, history teaches us that the realization of our goals will be neither quick nor easy.

Our college’s evolution, especially over the last half-century, has been defined in large part by this kind of community-driven leadership. In fact, today’s Williams was shaped tremendously by a string of fundamental and farsighted college decisions over several years, beginning in the early 1960s, that led Williams to:

We intend to celebrate these 50-year anniversaries, as befits a college, with scrutiny and analysis.

We’ve begun by asking historian Michael Beschloss ’77 to interview President Emeritus John Chandler, who as dean of the faculty and then as a Williams board member was a central eyewitness to these times. Their conversation (beginning on p. 12) focuses on the leadership style of Jack Sawyer, who served as president during those years.

It’s clear, though, that changes of this size were not the work of one person; many people and factors played roles. Over the next few years we’ll have conversations on campus and in these pages that explore the broader social context, the campus dynamic and the individual people and processes that came to bear.

Understanding more deeply these important parts of our past will inform the essential work we do together now to help Williams continually evolve to meet the future.