“After the television images, the photographs and the news stories, come the writers.” Course description for Aminatta Forna’s “Witness Literature” 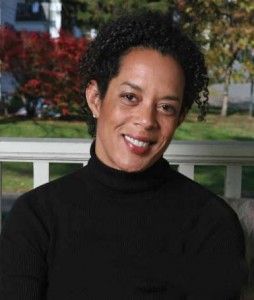 In researching her latest novel, The Memory of Love, Aminatta Forna came across an unsettling statistic about her homeland. According to Doctors Without Borders, more than 90 percent of Sierra Leone’s population suffered from post-traumatic stress disorder as a result of the country’s 11-year civil war.

“This struck me as questionable,” Forna says. Not in the sense of the deep and lasting impact of the war, which killed 50,000 people between 1991 and 2002. But, rather, in the sense of the largely Western perspective underlying the aid organization’s finding.

“One has to think very hard about what life was like in Sierra Leone before the war,” says Forna, who spent the fall semester as the college’s Sterling Brown ’22 Visiting Professor of Africana Studies. “Life in one of the poorest countries of the world is, by definition, traumatic. At what point do you say this is a psychosis or do you say, ‘Actually, this is life? Pain is life?’”

It’s one of many questions the acclaimed novelist and memoirist explored with the two dozen Williams students in her class, “Introduction to African Literature: Witness Literature,” as they studied not only the writings but also the history, politics and geography of the world’s second-largest continent.

Forna says there is a “distinct witness voice” flourishing in Africana writing, much of which is less than half a century old. That voice includes her own work, beginning with 2002’s The Devil that Danced on the Water, a memoir of how the execution of her dissident father at the hands of the Sierra Leonean government shaped both her life and that of her country. She was 10 years old when he died.

Her next two books, Ancestor Stones (2006) and The Memory of Love (2010), were “fiction woven out of the truth,” inspired by the wealth of research she compiled for her memoir. Ancestor Stones, Forna says, portrays how women in rural Sierra Leone lived, “how they painted their nails, how they prepared for their wedding day. … This voice had never been heard before in fiction. I felt I had to capture their experiences.”

The Memory of Love, which won the Commonwealth Writers Prize Best Book Award in 2011, evolved out of Forna’s interviews with people who she says turned a blind eye to the fate of dissidents like her father. “I was fascinated by the group who hadn’t done anything. … Is that really a neutral act?” she asks. “We were brought up to stand up, and we paid the price for it.”

Historian Shanti Singham, chair of Williams’ Africana studies program, says Forna’s three books reveal that she is “both a very engaged political writer—political with a small ‘p,’ she would say—and an activist herself.”

“Politics, activism and a meticulous, expressive use of language to move the human soul—these three characteristics are qualities of the best African thinkers and of Aminatta Forna,” adds Singham, who contacted Forna in London last year to propose the idea of introducing an African literature class to the Williams curriculum. “She was a natural fit with our program.”

For senior Nicole Shannon, a biology and anthropology major, Forna’s class was a revelation. “I knew I would gain a lot from reading the academic literature,” says the Auburn, Ala., native who, despite her Nigerian heritage, “never learned much in a classroom setting about African history or culture.”

The works of fiction they studied, Shannon says, “present a face of Africa that is not ‘dumb, mindless, poor and helpless’ but is dynamic and unique from country to country, as it should be taught.”

Sophomore Rose Courteau of Arkansas says the class left her thinking more deeply about “the tension between integrating cultures and beliefs into a globalizing world without compromising them.”

Says Courteau, who’s interested in non-Western cultures but felt, as a white woman, “self-conscious about trying to understand them” before taking Forna’s class, “I definitely plan to take Africana studies next semester.”

“It’s been said that if you want to know a country—in this case a continent—read its writers,” says Aminatta Forna. On the syllabus for her course “Witness Literature” last semester: Things Fall Apart (1958): Chinua Achebe’s look at Nigerian tribal life before and after colonialism, widely considered to be a foundational text of postcolonial studies; A Grain of Wheat (1967): Ngugi wa Thiong’o tells stories within stories portraying villagers transformed by the Kenyan Emergency of 1952-60; A Dry White Season (1979): Afrikaner André Brink explores racial intolerance in South Africa; So Long a Letter (1981): Mariama Ba’s epistolary novel sheds light on African women; Say You’re One of Them (2009): Uwem Akpan’s starkly modern fables bring to life the issues facing children; Harare North (2009): Brian Chikwava’s novel about life as a Zimbabwean refugee in London; The Memory of Love (2010): Aminatta Forna presents a fictional family coming to grips with the fact that their father failed to stand up to an oppressive regime; Oil on Water (2011): Helon Habila’s fictional journalists explore the human cost of the oil industry in the Niger delta.