Piecing together an artifact of Williams history. 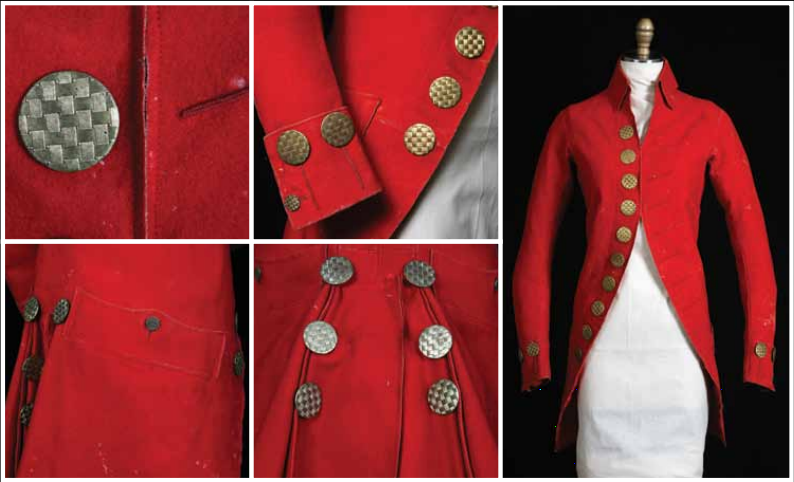 Among the details that helped costume designer Deborah Brothers and Mattie Mitchell ’12 date the mysterious jacket to the 1790s are (this page, clockwise from top left): large, brass, decorative buttons and uncut buttonholes, narrow cuffs relative to earlier styles; two sets of hook-and-eye fasteners that keep the front of the jacket closed; back pleating; and what Brothers calls the “unique” upward flap of the pocket. A 1789 oil painting of U.S. Sen. Elijah Boardman of Connecticut features a very similar jacket (http://bit.ly/similarjacket).

Every year, costume director Deborah Brothers gets at least one request from someone wanting to dress up as Col. Ephraim Williams Jr., the college’s founder. Now, thanks to the help of classics major Mattie Mitchell ’12, she is much closer to being able to create an authentic set of period clothing for the colonel.

A few years ago, Brothers learned that the college archives had what was thought to be a military jacket belonging to Ephraim Williams’ younger brother Thomas. The jacket, a gift to the college in 1911, was too small and fragile to be worn, but its deep red broadcloth was in remarkably good shape. Little else was known about it.

That all changed last summer, when Mitchell, a Class of ’57 Summer Research Fellow who loves to sew, approached Brothers with a proposal to research the jacket’s history. The two spent 10 weeks poring over art and history books, contacting historians and seamstresses and even visiting Fort Ticonderoga in New York and Historic Deerfield in Western Massachusetts. Their goal was to get a sense of the materials and tailoring techniques used around the time Ephraim Williams was killed in September 1755, during what’s known as the “Bloody Morning Scout” near Lake George.

It turns out the jacket actually dated to the 1790s, too late to have belonged to Thomas Williams. Brothers and Mitchell also determined it was more likely a hunting jacket than part of a military uniform. Looking into the Williams family tree, Mitchell found that Thomas had a grandson of the same name. The jacket may have belonged to the youngster.

Brothers and Mitchell created a pattern out of the jacket that will be used to fashion a replica by hand, as was done in the 18th century.

Meanwhile, Brothers, who last year designed about 70 costumes (often with the help of students) for theater department productions, is continuing her work to accurately “dress” Col. Williams. “The plan,” she says, “is to apply what we can learn from the inventories of what Ephraim had in his chest of clothes at the Bloody Morning Scout and the inventory of personal property of what he had in his will.”

Mitchell says the project is exactly the kind of research she’d like to do for museums in the future, “so that we can preserve the history of these garments as well as the artistry that created them.”