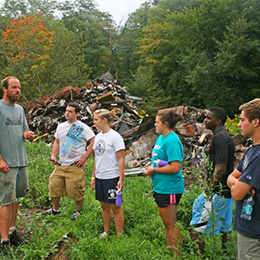 Twenty percent of Northern Berkshire households have limited access to nutritious food. Michael Gallagher ’06 and his Square Roots Farm are helping to change that.

At the end of Daniels Road in Clarksburg, Mass., near the bottom of a mountain, is a flat, open plot of land. Vestiges of its prior use are scattered across the 53 acres: a rusted, retired tractor from a 1950s dairy; the rubble of a never-completed residence hall for the Massachusetts College of Liberal Arts.

When Michael Gallagher ’06 first visited the property several years ago, looking to start a community supported agriculture (CSA) program, it had been three decades since a farmer tilled the soil. Gallagher envisioned harvesting a bounty of vegetables and raising free-range livestock. He pictured a bustling farm stand where CSA members would stop by each week to pick up their allotment of asparagus, melons and spinach.

What he couldn’t have foreseen, however, was that his Square Roots Farm, now two years old, would also do its part to support the community— providing low-income families in North Berkshire County with fresh, healthy, sustainably grown food.

In a typical CSA program, members purchase shares of a farm in the winter, before the planting season, and then receive a portion of the crops as they are harvested throughout the year. Though the model allows farmers to disperse risk and to develop strong relationships with the people who join, the shares needed to keep a farm running can be expensive— costing members upwards of $500 annually—and often must be paid for in a lump sum.

As a result, “CSAs tend to get focused on affluent populations,” says Gallagher. As an aspiring farmer, he remembers wondering: “How do we serve the needs of the people here?”

Gallagher graduated from Williams the same year the Food Bank of Western Massachusetts released the results of its yearlong study of North Berkshire County. Among the findings, 11 percent of households had experienced moderate or severe hunger in the previous year. And despite doubling and then tripling the distribution of meals through local food pantries over the previous decade, nearly 20 percent of households had limited access to nutritious food.

Target:Hunger, an offshoot of the food bank, began holding community discussions about how to address the problems highlighted by the study. Kendell Newman ’08, who joined the group with several other Williams students in 2006, says she recalls one particular brainstorming session with “dozens and dozens of ideas written on posters all over the walls: more affordable supermarkets; better transportation; new food pantries; a CSA for low-income families.”

Newman, who had become interested in sustainable agriculture after an internship with a farm in California, says she “put a big star next to the CSA idea.” She and three other seniors taking the 300-level workshop “Environmental Planning” with Sarah Gardner, associate director of Williams’ Center for Environmental Studies, decided to research the feasibility of starting such a program. Their final, 64-page report included surveys of local residents, interviews with area farmers, comparisons of different CSA models and recommendations for funding as well as potential sites based on soil testing.

“Already,” the students wrote in the conclusion, “Target:Hunger’s previous work and our project’s research have excited and inspired landowners, community members and potential partners and set important conversations in motion.”

Those conversations would eventually include Gallagher, who, after Williams, headed south to join the Mississippi Teacher Corps, a Teach for Americastyle program. A biology and Russian major just two classes shy of completing a math major as well, he taught math and coached soccer in a critical-needs school in an impoverished community while working on his master’s degree. But the work took its toll. As he struggled to figure out what he might do once his two-year commitment was up, his thoughts kept returning to farming.

A native of Cheshire, Mass., Gallagher had spent three summers baling hay at a nearby farm in Lanesborough during high school. His employer had worked a full-time job on top of his farm duties, so Gallagher “didn’t exactly get the impression that it was a viable lifestyle option.”

But as he researched current farming practices, he found a wealth of “alternative ideas” that seemed feasible financially and environmentally. In particular, Caretaker Farm in Williamstown, with ties to both the college and surrounding community, was a “huge inspiration” for him. Within a week of completing his teaching program, Gallagher returned to the northeast to apprentice for a year with the owners of Homestead Farms, a 100-member CSA program near Troy, N.Y. He also spent a season at Maple Wind Farm in Vermont, where he met Ashley Amsden, who would become his girlfriend and business partner.

The two set about finding land of their own and ended up in Clarksburg, at a property owned by Paul and Carolyn Marshall. Gallagher recalls several visits spent shoveling cow manure with Paul, who, despite his affinity for the lifestyle, had never been a full-time farmer. Slowly they solidified the details: Gallagher and Amsden would lease three-and-a-half acres of the long-defunct dairy from the Marshalls and rent the mobile home across the street. 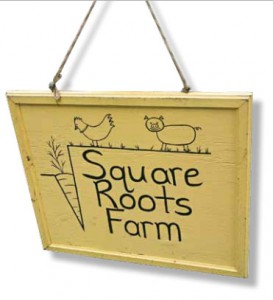 Meanwhile, the Hoosac Harvest group, an outgrowth of Target:Hunger, had come up with a plan to help make CSA membership more affordable. In addition to raising money to cover up to 85 percent of the cost of farm shares for low-income families, Hoosac Harvest arranged for participants to pay the remainder in small installments or with food stamps. Regardless, the farmer would get the full share price up front.

“The model, in retrospect, seems utterly simple,” says Sharon Wyrrick, a Williamstown playwright, filmmaker and member of Hoosac Harvest. “A farmer has no time to figure [the subsidies] out and needs to get full price for his goods. So our job is to find a way to make up the difference, promote the availability of shares and do whatever is needed by the farmer to make it work.”

All Hoosac Harvest needed was to find a farmer interested in its model. When Gallagher received a copy of the group’s proposed job description through a mutual friend of his and Newman’s, the pieces fell into place.

Darlene Ellis is carving a jack-o’- lantern as her 13-year-old son Nathan pops the cut-out pieces of pumpkin into his mouth, whole. He eats only raw vegetables, so his mother is particularly excited about making the weekly trip to the stand at Square Roots Farm now that the family has a membership.

Ellis, who helped develop the model for the subsidized CSA program, says her family never could have joined at the full share price.

“It’s changed a lot for us,” says the community activist, whose husband is the night operations manager at the Williams Inn.

Ellis stopped serving the bland, processed canned vegetables she used to purchase at the grocery store. Her 10-year-old daughter Natalie, who last season helped farm volunteers pick peas, garlic, green beans and potatoes, is toying with the idea of becoming a vegetarian now that she has a better understanding of where her food comes from.

Meanwhile, the number of shares offered to low-income families is growing while Square Roots Farm expands. In 2011, 10 of the farm’s 52 shares were subsidized by Hoosac Harvest (up from eight of the farm’s 40 shares in 2010).

Serving low-income families “is definitely not something we’d be able to do if not for Hoosac Harvest group,” says Gallagher, who also puts out a box at each pickup for members to donate portions of their produce to local food pantries. “It’s great to have that be a part of the farm’s identity right off the bat.”

Throughout the winter, Gallagher says he and Amsden will be busy moving snow, cleaning up the land and preparing “for hours on end on our Excel spreadsheets, trying to figure out how much to plant, trying to make plans.”

Still, there have been and will be surprises. Paul Marshall died unexpectedly in fall 2010, so Gallagher and Amsden “sort of inherited” all 53 acres instead of the few they originally agreed to lease. As a result, the couple decided to stop raising cows and start hiring apprentices to help.

And planning only goes so far. Last season a bull ate all the bok choy picked by volunteers. The year before, Gallagher forgot to vent the greenhouse and ended up losing 30 flats of young plants.

Yet Gallagher remains enthusiastic about the building, repairing, feeding and pig wrestling that now are part of his daily life. He has an abundance of support from fellow farmers in the area and a strong, devoted membership. The farm’s Facebook page has more than 350 followers, and members post photos of their families and the culinary creations they’ve made with their produce. Gallagher, meanwhile, shares photos of pigs and newborn lambs along with farm updates.

“On a traditional farm,” he says, “if my stuff doesn’t grow, I can’t sell, and I won’t have any money. You already have the money in a CSA setup, but the idea of disappointing people I know and care about encourages me to work more.

“Maybe that keeps me from sleeping that extra hour some mornings,” he adds. “We landed in a good spot.”

Lauren Shuffleton ’12 is an American studies and English major from East Hampstead, N.H., who has done community organizing in the Berkshires, specifically around food security issues.
IMAGE CREDIT: Photos by Roman Iwasiwka unless otherwise noted.
Print this page