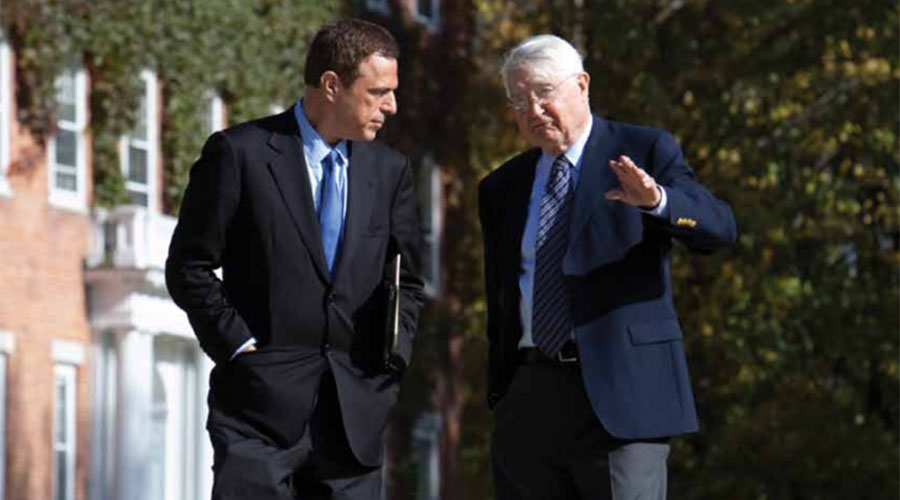 A conversation about Jack Sawyer’s Williams presidency with his successor and friend, John Chandler. 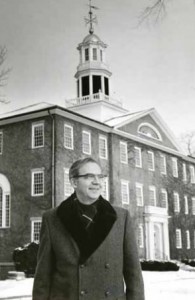 Introduction and Interview by Michael Beschloss ’77

When my classmates and I arrived in Williamstown in September 1973, we took for granted certain aspects of college life. Fraternities were no longer the center of residential life. Williams was coeducational. Its curriculum was cutting edge. I don’t think any of us understood at the time how major these developments were or how much they were owed to the students, faculty, staff and alumni working for change under the leadership of the just-departed president, Jack Sawyer—that bespectacled, wily, ambitious, shrewd, strong-willed and farsighted leader—who has since been called “the most transforming leader Williams has ever had.”

Those words belong to his successor, John Chandler, president during my time at Williams. Chandler worked closely with Sawyer while serving as the college’s Cluett Professor of Religion, acting provost and dean of the faculty. When the Williams Alumni Review asked me to interview President Chandler on the occasion of the 50th anniversary of Sawyer’s own installation as president, I was happy to do it. On an unusually balmy afternoon for autumn in Williamstown, we sat down to talk about Jack Sawyer’s leadership and his legacy to Williams. Here is an excerpt from our conversation.

Michael Beschloss: Why was Jack Sawyer chosen as a Williams trustee at 34? Wasn’t that a little odd in those days?

John Chandler: It was odd. He was extraordinarily young. But I think that relates very much to the fact that at that time, President [James Phinney] Baxter regarded Jack as his successor. Anne [Sawyer] told me that Jack was embarrassed when he attended his first trustee meeting because, in introducing him, President Baxter said something to the effect of: “Meet my successor.” Knowing how process-oriented Jack was, Jack would immediately have thought—I’m surmising— “The trustees pick the president.”

MB: He might have been worried that it could damage his chances to be president?

MB: Did you know much about Sawyer before he became president?

JC: The scuttlebutt among the young faculty was that he was very conservative, very cautious. I was at Yale giving a talk on the day President Baxter announced at a faculty meeting who his successor was. When I got back and heard the news, the people with whom I talked—other young faculty—said, “There was a kind of funereal quality to the announcement.” You could tell that Baxter wasn’t all that enthusiastic. A lot of us had figured out that by then Vince Barnett [professor of political science] had become his preference. As a trustee, Jack had been critical of President Baxter’s failure to take action regarding fraternities. Anne Sawyer says that Jack was also unhappy with Phinney because Phinney had very low aspirations for fundraising and wasn’t very active. In 1961, just before he retired, President Baxter announced the successful completion of a capital campaign in which he raised $4 million. Less than two years later, Jack announced a campaign of $14.6 million. And he raised it. Baxter certainly was devoted to fraternities. He frequently said that he came in with 15 fraternities and that he expected to leave with 15, and he held to his vow—with great difficulty.

MB: So when the trustees chose Sawyer, do you think they expected him to ultimately bring women in and get rid of the frats and change the curriculum dramatically? Did they have any idea?

JC: No. Of course, the trustees knew him well by that point. And I think they trusted him as a person of great loyalty to Williams, as a person with good judgment who wasn’t going to do anything that would be harmful to the college. I’m doubtful that they had in mind that that would be his agenda.

MB: Where do you think his strong feeling about fraternities really came from? It’s almost the last thing you’d expect from the former president of a Williams fraternity, whose background was hardly radical.

JC: Jack was certainly well aware that Williams had fallen behind Amherst and Wesleyan pretty substantially in its endowment—and that fraternities had a much more pronounced role at Williams than at Amherst or Wesleyan.

MB: Why were fraternities so important here? For those younger generations who didn’t have that experience— for example, I came here five years after fraternities were abolished. How central was their role in college life?

JC: Williams drew very heavily from Deerfield, Andover, Exeter and so forth. Just a little before that era of the 1960s, students were rushed from the moment they got off the train. Many students came to Williams largely because of the fraternities.

MB: How did the people who were rushing get information about who was coming?

JC: Some they would get from talking with alumni of the schools they were coming from. Later, when rushing had been postponed to the sophomore year, they depended upon junior advisors. If your fraternity had a few wellplaced JAs, you were going to bring in prime candidates.

MB: What kind of selection criteria would they use?

JC: I would say being an athlete was a definite plus. Frankly, being good-looking, socially affable, sometimes the school you attended. And of course, on the negative side, there was clear discrimination against blacks and Jewish students. I’d say about half of the fraternities had sizable contingents of Jews, but there were some that had secret agreements with their national organizations requiring them to discriminate. In some cases those were ignored, but the pressure was there.

MB: So Sawyer assumes the presidency and immediately has to deal with this student petition demanding the abolition of fraternities.

JC: The way that Jack reacted to the petition, which was literally there on his desk when he took office, shows how strategic he was in thinking.

MB: What was that phrase he liked to use?

JC: Oh, “high principle and low cunning.” He was usually ahead of almost everybody. And so instead of panicking, he’d say, “Ah, opportunity!” To examine the problem, he appointed the Angevine Committee, which was very brilliantly, strategically done. As members he chose people who would have credibility with alumni in particular as well as knowledge of what fraternities had actually become. Older alumni had very romantic notions of fraternities, based upon a lot of outdated experience. So it was a matter of educating the alumni.

MB: So he knew it was going to be a big change, and he wanted it to happen with the help of older, respectable and, in many cases, conservative lawyers.

JC: Right. I remember once asking Jack why he had so many lawyers on the Williams board, and he said that they think things through carefully, and if they tell you it’s O.K. to make this move, usually it’s O.K.

MB: And he took the precaution of persuading several trustees to make up the difference in case alumni withheld financial contributions.

JC: By and large, the majority of students were against getting rid of fraternities. But there was a very vocal minority that worked much harder to get rid of them than the proponents worked to keep them. Of course, a lot of Jewish alumni, who’d been the victims of discrimination, were in favor of getting rid of them. And the faculty was overwhelmingly in favor of getting rid of them. They saw the downside of fraternities in the same light that Jack did—that they occupied far too much time. And that some of them had become sort of animal houses.

MB: Did anyone make the argument that this was now keeping Williams from becoming as great a college as it could be? Pulling us backward and downward?

JC: Very much so, yes. When I received the offer to come to Williams to teach in 1955, I had friends tell me, “This is a big mistake if you go there.” And I remember a friend pulling out that Life magazine article on Williams in 1949—“Life Goes to College”—and he said to me, “Look, every hand has a glass. This place is afloat in alcohol!”

MB: Abolishing fraternities was a major social revolution at Williams. Did it happen abruptly?

JC: Not exactly. Within days of the Angevine report, Kappa Alpha—President Baxter’s fraternity—offered to turn over the keys to its house to the college. Baxter himself played a large role in facilitating that offer. But in the end the fraternities gradually melted away. By the time they were truly abolished by the trustees in 1968, only about 10 percent of the upperclass students were in fraternities. After they were abolished, we found that alumni who had been estranged from the college began to reconnect. This was particularly true of Jewish alumni. Someone who was not Jewish but who certainly illustrated this was Elia Kazan ’30, the great film director, who began to pay attention to Williams. And it made a financial difference too. People who hadn’t given to the college began to give again. And there was a new sense of pride in the college.

MB: What about on the other side? How many alumni would say, “I’m not giving to Williams anymore?”

JC: Initially there were a lot of alumni who said that. There were some holdouts, and a few of them, as a matter of fact, were behind a couple of clandestine fraternities that continued to operate up in Pownal, Vt. But they just didn’t get much of a following from fellow alumni and finally just lost interest. Furthermore, the college continued to remind students that that behavior was unacceptable, and the students were motivated primarily by free beer parties, so they fell away.

MB: So what leadership lessons could we suggest to other college and university presidents from the way Jack Sawyer handled this issue?

JC: Don’t dilly-dally. Be decisive. And a very important lesson was develop a cadre of leadership from each essential constituency. He was very careful to cultivate members of Gargoyle, which was a more powerful organization then than it is now, editors of the Williams Record, the College Council, alumni leaders who were respected.

MB: The second social change he presided over was bringing in women as Williams students. How did that start?

JC: There is a kind of debate about whether Jack came in with a grand vision, first eliminating fraternities, then bringing in women. I must say it didn’t quite feel that way. There was a widespread pattern, particularly in the Northeast—with Harvard-Radcliffe and so forth—that led Williams to consider establishing a separate, coordinate college. Mount Hope Farm had been acquired in the midst of everything else that was going on, and there were at least two conversations with Vassar. It was wellknown that Yale was trying to entice them to move to New Haven, and Jack had a better idea—Mount Hope Farm.

MB: And the coordinate college-to-be was confidentially referred to as “Mary College,” as in “Williams and Mary.”