What You Need to Know About Election 2012 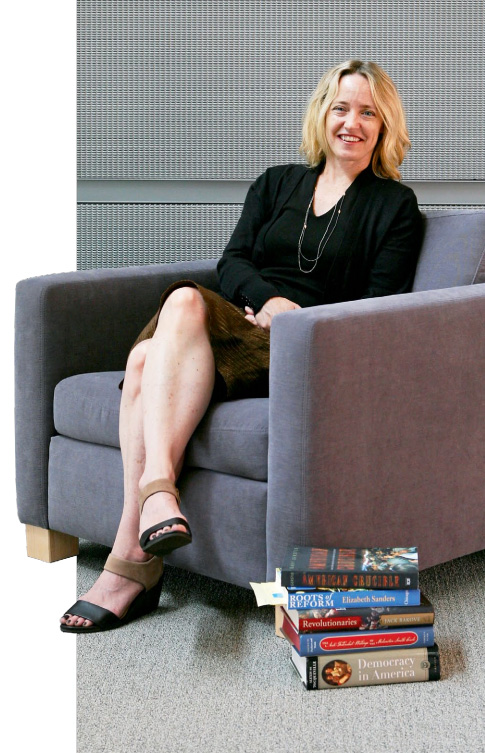 “Historic White House Win!” “Voters Embrace Call for Change.” “New Dawn.” So proclaimed newspapers across the country the day after Obama swept the 2008 elections, garnering more votes than any other candidate in U.S. history. Pundits and pollsters alike heralded the victory as the start of a new progressive era. Meanwhile, Williams political scientist Nicole Mellow was already at work on one of the first scholarly analyses of the election—one published just a few months later by CQ Press. Her research suggested that Obama’s victory, viewed through the lenses of political science and history, was not the sea change everyone was anticipating. “While journalists provide instant feedback,” Mellow says, “the work of scholars, who consider the results in a larger historical context or in light of what we know about election regularities, typically takes more time.” Already laying the groundwork for her analysis of the 2012 contest, which she’ll submit to CQ Press just a few weeks after Election Day, Mellow shares with writer Ali Benjamin a glimpse of what she’s paying attention to right now.

Red and blue are not fixed properties. We tend to think of “red” and “blue”—denoting electorates that vote Republican and Democratic, respectively—as enduring. The South is Republican, and the North is Democratic. But this, of course, is a change from a time when the South was solidly Democratic and the North a Republican bastion. Change does come, driven by economic shifts (such as northern deindustrialization or sun belt growth) or demographic trends (like the explosion in the Latino/a population or the rise of the “creative class”). In 2008, demographic changes favorable to Democrats, such as growing numbers of highly educated professionals, at least in part helped Obama to win a number of typically red states, including Virginia and Colorado. At bottom, then, electoral politics is about capturing new political real estate by taking advantage of changing conditions and emerging issues.

Sometimes there are seismic shifts… The 1932 election of Franklin Delano Roosevelt ushered in the New Deal era, making national government activism the norm. The election of Ronald Reagan in 1980 also helped generate a dramatic shift to a new public philosophy, one that perceived government as part of the problem. So deep and transformative were these shifts, even subsequent leaders of opposing parties governed along the same lines. Dwight D. Eisenhower accepted the basic tenets of FDR’s government activism, while Bill Clinton conceded, “The era of big government is over.”

…but we’re probably not experiencing one right now. While Obama’s election as the nation’s first black president was historic, expectations that it marked the start of a new progressive era were unrealistic. Obama campaigned—and has since governed—with a mixture of standard Democratic commitments and “post-partisan” pragmatism. He has stressed moderation and ideas over ideology, paired stimulus spending with tax cuts and advanced health care reform without the single-payer option that progressives championed. Right now neither party appears to offer a radically different vision of governance than what each has offered in the past. Still, the issues being debated today—the loss of the middle class, the national deficit, immigration, the environment and the role of the U.S. in international affairs—will likely be the bedrock for fundamental change sometime in the future.

So-called “new” movements really aren’t that new. While the media jumped to cover the Tea Party and Occupy Wall Street, evidence suggests that these movements aren’t new at all. Recent research shows that Tea Partiers represent a variant of Republican conservatism that’s existed for decades. Similarly, groups on the left have been criticizing Democrats since FDR. Rhetoric aside, party identification is the biggest predictor of voting choice. In recent elections, roughly 90 percent of Democrats and 90 percent of Republicans have voted loyally for their own party’s candidate.

Even independents are rarely that… Although roughly one-third of people in the U.S. identify themselves as independent, research shows the vast majority of them are “leaners,” consistently throwing their allegiance behind a single party. It’s likely that only about 10 percent of voters are truly undecided or up for grabs.

…meaning elections are won at the (increasingly small) margins. This was the case in 2008, when increased Democratic turnout, especially among African Americans, nudged Obama ahead in Virginia (which hadn’t voted for a Democratic presidential candidate since Lyndon Johnson in 1964) and North Carolina (which last chose a Democrat, Jimmy Carter, in 1976). Both states are now considered “in play” for the Democrats in 2012, though religious conservatives might turn out in higher numbers as a result of President Obama’s embrace of socially progressive stances on gay marriage and reproductive rights. When the parties are so closely divided, and large portions of the country are uncompetitive, attention focuses even more tightly on the few remaining swing states, which see the lion’s share of campaign advertising and attack ads.

“It’s (maybe) the economy, Stupid.” Conventional wisdom suggests that a weak economy favors the challenger and a strong economy, the incumbent—which would have predicted a win for George Bush in 1992, when economic indicators were looking up. It turns out that media portrayal of the economy also makes a difference. This helps explain why Clinton’s de facto slogan in 1992, “It’s the economy, Stupid,” was so successful. Which parts of the economy are improving, the timing of economic change and campaign messages can make a difference, too. All of which helps to keep politics interesting—and it’s why we all tune in on election night.