“People of all ages find history prior to the mid-19th century, when photography became available, difficult to connect with. Technology changes that in a really profound way.”
—History and Leadership Studies Professor Patrick Spero 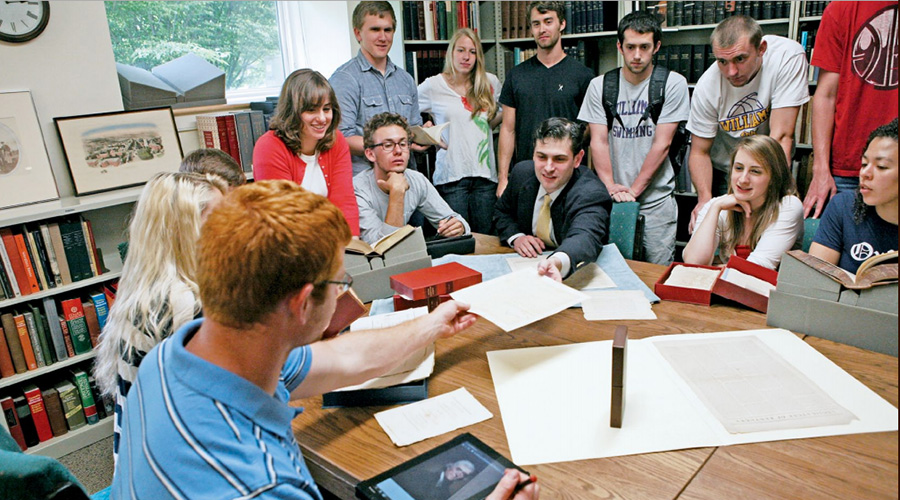 It’s 2:45 on a Thursday afternoon, and students in Patrick Spero’s “Politics of the Presidency” class are evaluating the campaign ad they’ve just viewed.

“It was scathing,” says one student. “A great attack.” “The music was so effective,” adds another. “It really gets your attention.”

The group could easily be discussing the latest TV spot for the 2012 presidential race. But the ad, created by history major Sarah Herr ’12, depicts a campaign that took place nearly 200 years ago—the contest between Whig William Henry Harrison and Democrat Martin Van Buren.

Armed with tablet readers on loan from the college’s Office for Information Technology, Spero’s students spent the spring semester creating videos for the candidates of every major, transformative presidential election from George Washington in 1789 to Abraham Lincoln in 1860.

While the technology and medium were anachronistic, everything the students used in their videos—music, pictures and words—were from the time period of the election being studied. That meant no images from currency, postage stamps or portraits rendered at a later time.

Put another way, Spero says, the videos needed to “capture the spirit of the election, as things actually were in that year, not the spirit of our historical memory.”

Students waded through a staggering array of primary resources, including approximately 1,000 historical newspapers, the Library of Congress image database, musical recordings and photographs. Grades were based on the videos’ academic and production values.

The students put in as much time—if not more—as they would writing a paper, with each minute of video representing eight to 10 hours of research, reading, production and editing. But unlike a paper, which might be read by the professor and perhaps a handful of fellow students, these videos had a much wider audience. Some 10,000 people from more than 50 countries viewed the students’ work on realclearhistory.com, a popular aggregator site that featured their videos.

Spero’s approach has garnered attention from leading historians such as Barbara Oberg, a member of Princeton’s history department and general editor of the Papers of Thomas Jefferson. “I am bowled over!” she wrote to Spero after viewing one of the ads. “I wish I’d known about these ads when I covered the election of 1800 in a junior seminar.”

Meanwhile, Spero’s students relished the opportunity to explore the early days of the Republic in a new way. “The fact that you have to think like a campaign manager from the late 18th or early 19th centuries when putting these videos together forces you to really immerse yourself in the history of the American presidency,” says Scott Fyall ’13, a history and political science major. “You must understand the issues that voters had to consider for each election.”

Says history major Kaitlyn Carrigan ’14, “There are so many sensory elements involved in creating the video. I’m engaged in the work in a really deep level.” That this kind of coursework is even possible speaks to the sweeping changes that technology has brought to the study of history. As recently as two decades ago, access to primary sources was highly limited—confined to rolls of microfilm, which couldn’t be searched easily, or to the archival holdings of a specific college or university library. As these resources have been digitized, researchers can quickly access exactly what they are looking for from anywhere around the globe.

It’s a revolution to which Spero, who received his Ph.D. from the University of Pennsylvania in 2009, has had a front-row seat.

The shift aligns with Spero’s professional aspirations to make history more accessible to the general public. In addition to publishing in academic journals and anthologies and presenting at dozens of conferences, he’s also focused on harnessing the power of technology in his field. As the Pew Post-Doctoral Fellow in Early American History at the American Philosophical Society, he wrote the first digital catalog of nearly 800 manuscript collections. Among them were the more than 10,000-page Thistlewood diaries, which provide a window into slavery, and a collection consisting of the William Temple Franklin Papers, Arthur Lee Collection, Benjamin Franklin Papers and Benjamin Franklin Bache Collection, which, taken together, offer a nearcomplete picture of America’s diplomatic maneuverings in Europe during the American Revolution.

Spero previously worked as producer, education director and researcher for Now Debate This!, a multimedia educational project exploring the lives and legacies of Washington and Lincoln. “I never felt satisfied unless I was somehow bringing history to the public,” he says.

Spero’s students certainly enjoy the approach—despite their initial trepidation over having to master tablet readers and video editing software. “But I was more curious than scared,” says history major Kelsey J. Roggensack ’13. “So I gave it a try.”

“We have all practiced writing papers for years and years,” says Herr. “This class was entirely different—it was an extension of liberal arts for the digital age.”

Check out campaign ads made by students in Spero’s “Politics and Presidency” class at http://bit.ly/zT54Z0.

President Maud S. Mandel has announced plans for the fall 2020 semester. Please note that all Williams College buildings are closed to the public until further notice.