A Life of (Writing) Crime

“If one more literary person says in that oh-so-condescending tone, ‘I don’t read … mysteries,’ I’m going to take a novel by Peter Abrahams and smack him on his smug little head.” 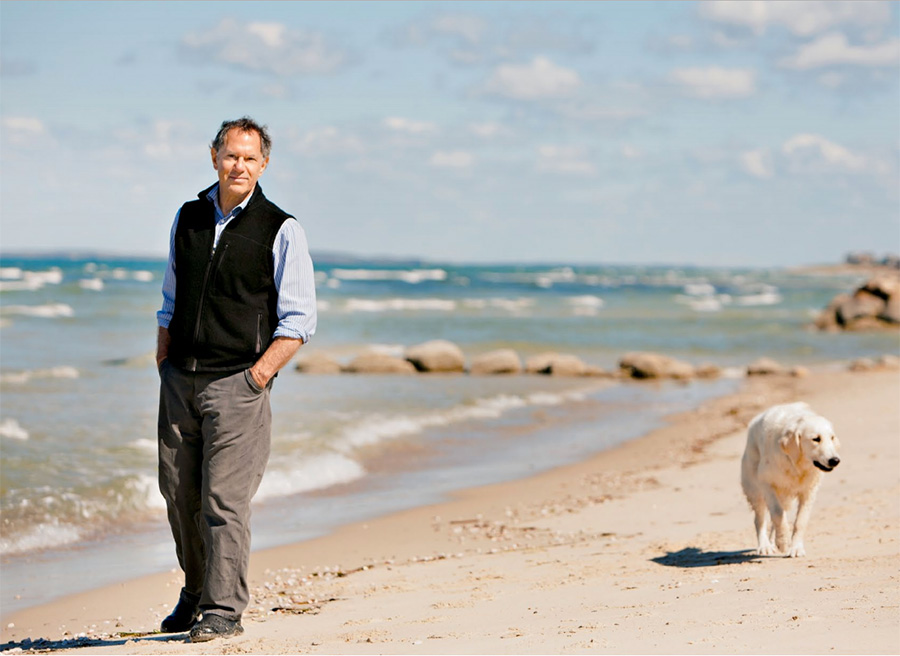 He’s been dubbed by Stephen King “my favorite American suspense novelist.” And critics at The New Yorker, The New York Times, the Los Angeles Times and Salon.com routinely heap gushing praise upon his work.

But bestselling suspense and mystery novelist Peter Abrahams ’68 still wonders at the persistent distinction between crime fiction and literary fiction. “It’s silly,” he says. Taking in the sweep of marshland behind his Falmouth, Mass., home on a Sunday in May, Abrahams says the only thing that matters is telling a great story.

Since graduating Williams, he’s produced 19 novels, including the popular Echo Falls Mystery series, as well as several books for young readers and the Chet and Bernie Mysteries (released under the fleetingly secret pen name Spencer Quinn, outed in early 2009 by the Cape Cod Times).

“I’ve never had more on my plate,” says Abrahams, who attributes his love of stories, particularly adventure stories, to both a childhood surrounded by books and to his late mother, who taught him how to turn a phrase and choose “the exact right word.”

Inspired as a teen and young adult by writers like Graham Greene and Ross Macdonald, Abrahams, an Edgar Award nominee, turns out a book every two years or so. It’s an output he maintained even during that long stretch when his writing schedule was arranged around the demands of four athletically overachieving children, now adults.

These days his schedule is far more routine, with the airy clapboard house occupied by Abrahams, his wife Diana and two feisty retrievers. Abrahams, who says he does some of his best writing in the shower, works at a desk in a roomy, spare studio over the garage. “Notice the desk faces away from the view,” he says, describing a “Calvinistic” routine of waking to an hour of e-mail correspondence and Facebook updates, followed by a trip to the gym or tennis court, and then hunkering down to meet his daily quota of 1,000 words. He rarely falls below it.

Abrahams doesn’t read crime fiction—“I don’t want any contamination,” he says. And perhaps that’s one reason why his novels continue to surprise. Though full of heart, his prose, praised by Kirkus Reviews as “pitch perfect,” is restrained. He leaves the bludgeoning to his characters. “I like a sentence to do more than one job,” says Abrahams, who has made a point over the years of paring down dialogue and keeping description to a clean, precise minimum. “The imagination of the reader is one of your biggest tools.”

His books are laced with literary references, though readers may not always understand them. It was years before one reader, a teen-aged girl in England, noted in a fan letter how she appreciated that a character named Strade drew inspiration from Arthur Conan Doyle’s Inspector Lestrade. Though committed to the suspense genre, Abrahams toys with it in bold ways. His 2005 psychological thriller Oblivion, for example, presents a protagonist who, in addition to being a famous private investigator on a confounding case, suffers from amnesia caused by a brain tumor that has death nipping at his heels.

One day several years ago, Abrahams and his wife were sitting in their kitchen when Diana said, “You should do something with dogs.” Abrahams decided within moments that he would try to write a book from a dog’s point of view. He recalls dashing over to his office, fingers itching. “Sometimes six hours of work can happen in 30 seconds,” he says.

The result was the Chet and Bernie mystery series, in which Chet the dog functions as Watson to Bernie’s Holmes. An unabashedly crotch-smelling, leg-lifting canine, Chet advances the story by describing what Bernie’s up to while holding forth in the sparest doggie poetry: “And then—yes. She barked. … I barked back. She barked. I barked. She barked. I barked…”

Another of Abrahams’ beloved sleuths is Ingrid Levin-Hill, a quick-thinking, soccer-playing, Sherlock Holmes-reading 13-year-old who resides in Echo Falls, “home of a thousand secrets.” The Echo Falls series has won several awards, including the 2006 Agatha Award.

Abrahams describes his profession as one of the loneliest. But with his Echo Falls and Chet and Bernie fan bases percolating on Facebook, grateful readers get to commune with each other and with the author. “Isn’t this beautiful?” Abrahams asks, showing off a lush Chet-and-Bernie-themed quilt made of squares sewn by fans.

An English major at Williams, Abrahams occasionally looks to his undergraduate days for inspiration. In his 2000 novel Crying Wolf, a small-town Colorado scholarship student is seduced into the world of unimaginably rich Manhattan twins on a New England college campus modeled after Williams. As it simmers, the hall-of-mirrors tale takes the reader off campus as well as beneath it—to a network of steam tunnels inspired by the mischief of Abrahams’ student days, when his studies were often neglected in favor of underground journeys without maps.

As for what lies next on his own journey, Abrahams says he hasn’t given retirement a moment’s thought. “Maybe it’s ultimately and ironically a failure of imagination,” he says, “but I can’t imagine life without making up stories.”

Read more about the author at www.peterabrahams.com. And follow his canine creation at www.chetthedog.com.