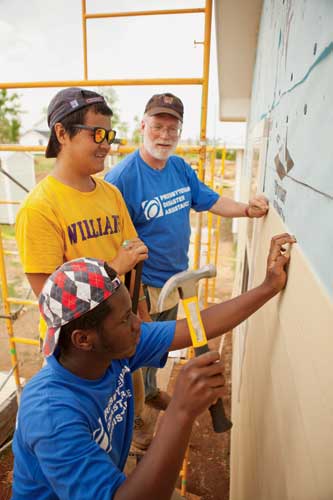 It’s no surprise that a group of Williams students spent their spring break in Tuscaloosa, Ala., helping to rebuild homes in the wake of devastating tornadoes that rolled through the city the previous April. What made this trip different— perhaps unique—is that the students also spent their time engaged in deeply personal conversations about faith.

Williams’ four chaplains, whose own faiths span the Abrahamic traditions, came up with the idea last fall, soon after Bilal Ansari, the college’s first Muslim chaplain, joined their team. They’d all served communities including prison inmates and Calcutta’s homeless, and all saw a shared service project at Williams as a powerful opportunity for interfaith dialogue. “By sharing spiritual traditions,” College Chaplain Rick Spalding said before the trip, “we hope to better understand each other, appreciate other religious teachings and deepen our most personal commitments as citizens in a fragile, multifaceted world.”

The 11 students who went, many of whom weren’t involved in organized religious life on campus before, included a Jain (practicing an ancient religion from India), an evangelical Christian and an atheist who was raised Jewish. The chance to do service work, travel and make new friends was a draw; equally intriguing was the opportunity to bring faith to the forefront of their busy lives.

As Ben Shuham ’14, a Jewish student, wrote of the trip in The Williams Record, “Faith (or the lack thereof) is a subject many of us do not focus on during our time at the college. … Even in religious studies classes we approach faith through an academic lens, usually without bringing personal belief into the discussion.”

Bunking on air mattresses in Tuscaloosa’s First Presbyterian Church, students and chaplains spent their days building a new house for Pam and John Nero, whose old one had been un-roofed by the tornado. Nights were spent in intense, wide-ranging, sometimes hilarious, conversations about the pros and cons of various dietary practices, the collision of science and religion, and “absolute truth.”

“As Williams students, we’re going to have the opportunity to change our world in just a few years,” says Jay Mehta ’13, a Jain from Westchester County, N.Y. “Coming to terms with what we do and don’t believe in, as well as understanding the outlooks and beliefs of others, will be vital.”

Read more about the trip on the following pages. And check out http://bit.ly/alabamaservice for photos and videos.

On scaffolding, around dinner tables and in places of worship throughout Tuscaloosa, students and chaplains explored questions they might not otherwise have had time to consider on campus. Such as what it means to be called by God and whether science and religion are mutually exclusive. A conversation about forgiveness fascinated Sam Jeong ’14 (pictured here, center). Ansari, the Muslim chaplain, discussed “completely forgetting the thing that happened,“ Jeong recalls, while Cantor Bob Scherr and Spalding (at right), a Presbyterian minister, said they would set aside the event in their minds but carry it with them as part of the story of who they are. Says Sarah Gottesman ’14, “The conversations seemed to exist in the space between what we thought we knew and what we were just discovering as we spoke and listened.” 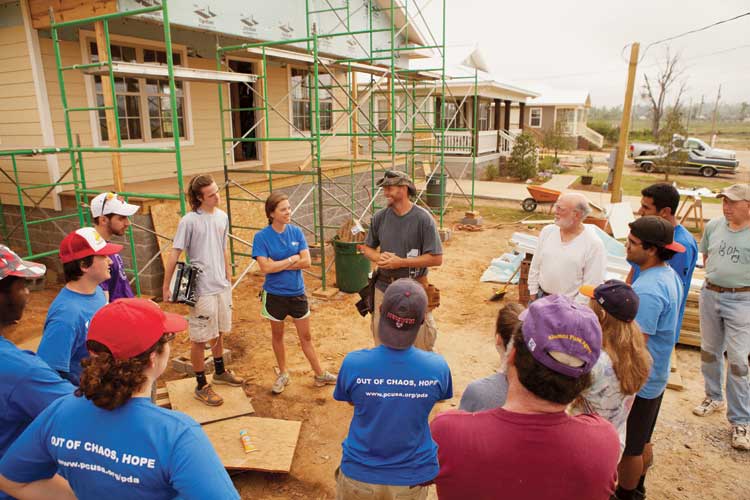 Habitat work is a study in organized chaos. With three people managing each piece of clapboard, a fourth to hold the level and a fifth and sixth to work the tape measure, strangers on the Williams trip quickly became partners. Deeply personal conversations seemed entirely natural, as when site leader Pete Deworken, an evangelical Christian (pictured below, right) told the Williams group that he moves his family from place to place as he feels called to by God. Chih McDermott ’14 (below left, in the red and white cap), also an evangelical Christian, was particularly moved by Deworken’s definition of service: “We will all know our calling by what our heart breaks for.” Service to others is a value shared by virtually all religions, which is why this project was a powerful platform for interfaith dialogue. “Some of our work is about lifting up the important differences between various faith perspectives,” says Spalding, ”and some of it is about the strength we draw from a common humanitarian taproot. Inviting a small, religiously diverse group of students to engage side by side with us in humanitarian work brought to that work both a sense of common cause and a sense of religious and spiritual particularity.” Adds Muslim Chaplain Ansari, ”Exploring the inner faith identities that are immersed in an elite, secular institution brings about students engaged with and prepared to meet the unmet needs of the world.”

These days, when Muslim students at Williams cook Shabbat dinner for Jewish students, it’s an enjoyable but not particularly notable campus event. Such faith-centered—and multi-faith— interaction is fairly common on college campuses. But in the opinion of College Chaplain Rick Spalding, such encounters these days are particularly robust at Williams. “All the membranes are more permeable than they’ve ever been before,” says Spalding, who came to campus in 2000 after serving Presbyterian congregations and several colleges and universities (most recently Harvard).

In any given year (or on any given day, since Williams students themselves sometimes move in new religious directions), the campus community reflects some 30 faith traditions, from Anglican to Zen Buddhist. The job of the chaplains’ office, as it says on their website (http://chaplain.williams.edu) is to promote “courageous, candid and transformative dialogue among religious communities and between theologies and other disciplines of intellectual life.”

Spalding carries out this mission alongside three other religious leaders. Cantor Bob Scherr came to Williams in 2004 after a career leading synagogue communities. Father Gary Caster arrived three years later, having worked at Illinois State and Illinois Wesleyan Universities and with Mother Teresa (“more accurately, for her,” Caster jokes) in Calcutta. Muslim Chaplain Bilal Ansari, whose father was San Francisco’s first imam and whose mother is a Pentecostal minister, arrived on campus last September following a career in prison ministry.

They do their work at Williams through initiatives like the Alabama trip as well as “Theology on Tap,” held late at night in the Paresky Center’s ’82 Grill, where the chaplains answer students’ questions about their respective faiths. Another program is “Encountering Religion,” in which chaplains and religion professors chat informally with students about the sometimes uncomfortable intersection of religious conviction and academic analysis. Says Caster, “We all want students to understand that a Williams education is not about tearing down faith but instead about broadening perspective and deepening understanding.”