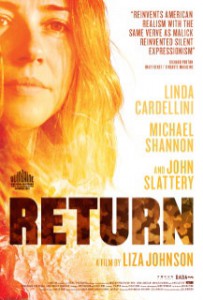 Return, a film by Williams art professor and American studies chair Liza Johnson ’92, tells the story of a servicewoman struggling to resume her life after a tour of duty in the Middle East. With openings in New York City and Los Angeles on Feb. 10, the film (whose credits include director of photography Anne Etheridge ’92 and producer Noah Harlan ’97) was released digitally on Feb. 28. Here’s what some reviewers had to say:

“It’s what indie filmmaking ought to be.”
—Time Out New York

“Johnson’s feel for the rhythms of reconnection are steady, and she and her fine actors make Return one of only a handful of films to honestly address what to many is heartbreaking reality.”
—New York Daily News

“Expertly and sensitively acted with a soul-baring lead performance by Linda Cardellini, Return is beautifully-written, artfully directed, and all too relevant today.”
—Sirius/XM Radio

“Anchored by a powerfully restrained performance by Ms. Cardellini … Return, Liza Johnson’s sober first feature, is impressive for what it leaves out.”
—The New York Times

For more reviews, and to watch the film trailer, visit return-film.com.