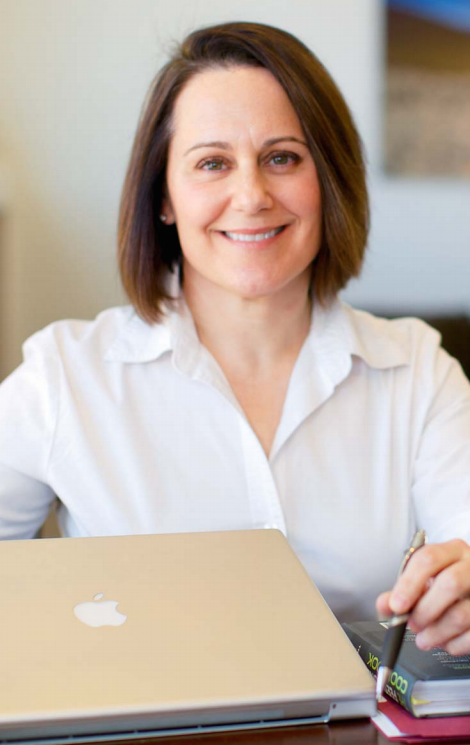 “The goal was to write an accurate book about elite athletes and give an empowering message to girls.” —Beth (Schmidt) Choat ’86, author of Soccerland

As a journalist with Sports Illustrated and ABC Sports in the 1990s, Beth (Schmidt) Choat ’86 had an epiphany. Interviewing Olympians like figure skater Michelle Kwan and gymnast Shannon Miller, Choat says, “It struck me that there was this 12-year-old girl inside who wanted to read great stories about the best young female athletes in the world.”

Now an officer with the Las Vegas Metropolitan Police Department, Choat satisfied her inner “tween” in 2010 with the publication of Soccerland—her debut young adult novel and the first title in her International Sports Academy series. The book, which has garnered praise from soccer icon Brandi Chastain, among others, revolves around Flora Dupre, a Maine teenager and gifted soccer player who yearns to play for the U.S. in the Olympics and World Cup.

The book was hardly a stretch for Choat, who from a young age had immersed herself in a wide variety of sports—first at Phillips Exeter Academy, where she participated in cross country, track and tennis, and then at Williams, where as cross- country ski team captain she twice competed in the NCAA Div. I Championships. As a sports journalist, she spent time at Olympic training centers in Lake Placid, N.Y., near where she grew up in the Adirondacks, and in Colorado Springs, Colo. “A part of me wanted to pursue cross-country skiing after Williams, but I didn’t have the money,” she says. “I also came to the sport relatively late, at age 19, when I had too many intellectual interests to focus on a sport I was good at but didn’t love.”

Choat encountered that kind of single-minded focus again and again in her two decades as a sports writer. In particular, she found that serious female athletes don’t mature emotionally the way average teenage girls do. “To be the best you must live a very unique life,” she says. “You give up a lot—proms, sleepovers and a normal education. You can’t be distracted by your hormones.”

In writing Soccerland, she worked to strike a balance between authenticity and marketability. An early draft of the book omitted any male love interest for the 14-year-old protagonist, Flora. At her publisher’s suggestion, though, Choat added a character, Logan, “as a crush.” Flora also struggles throughout the book with the death of her mother from cancer—something Choat based on the experiences of a few close female friends. She also used the childhood home of a Williams roommate, who grew up in Maine potato country, as a model for Flora’s hometown. “You write what you almost know,” Choat says.

Despite never having written fiction, Choat completed her first draft of Soccerland within six weeks, escaping her Upper East Side Manhattan apartment to spend hours working in a nearby public library. Increasingly frustrated by mainstream journalism, and eager to get back to an active outdoor lifestyle, she and her husband moved to Las Vegas in 2008, while she was putting the finishing touches on the book.

As she pondered her next career move, a job posting for an editor with the Las Vegas police department caught her eye. It turned out the department wasn’t hiring for the position anymore, but a recruiter encouraged Choat, then 44, to become a police officer.

After 11 months of police academy and field training, Choat became a full-time member of the force the same month Soccerland debuted. “It’s a challenging career on so many levels,” she says. “There are real similarities between journalism and police work. When you’re a journalist, you get a version of the truth.”

To keep up with the physical demands of being a police officer, Choat competes in triathlons, open water swimming races and mountain biking events, and she hopes to represent Las Vegas at the 2013 World Police and Fire Games in Belfast, Northern Ireland. “I’m training harder now than ever,” she says. “You always have to be prepared for jumping over walls or restraining people who fight when being taken into custody.”

Thanks to the commercial and critical success of Soccerland—it ranks as a Junior Library Guild selection and is a final nominee for a 2012-13 Truman Readers Award—Choat is busy crafting her next two books in the International Sports Academy series. These two will focus on gymnastics and figure skating and the issues surrounding both, such as pressure from parents, coaches, agents and the media; weight and body image; liking versus loving a sport; and fear of failure.

Choat hopes that the series will fill a void in the young adult literary market, in which books aimed at girls typically focus on boys, gossip and materialism. “When I was 12, I wanted to read a smart sports book with role models,” she says. “It’s ironic that I wrote the novel I wanted to read.”

Find out more about Soccerland and Beth Choat ’86 at theinternationalsportsacademy.com.