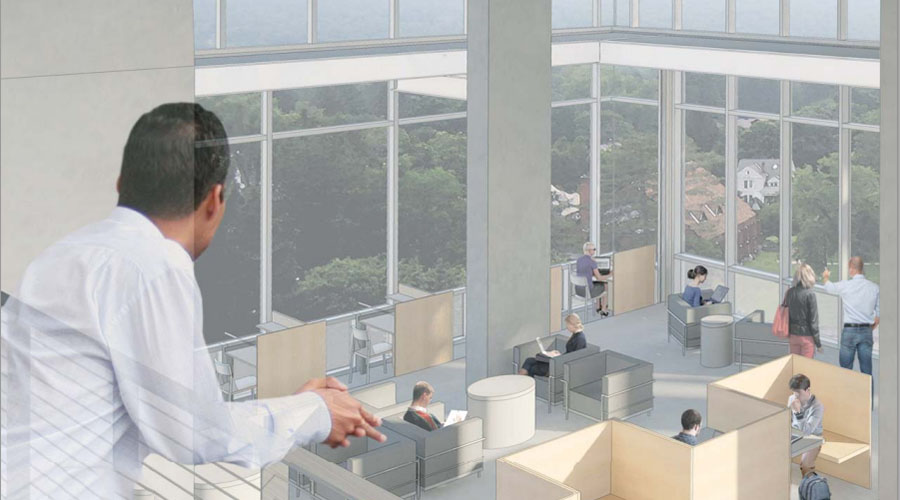 When vast amounts of human scholarship are as close as the nearest smartphone, what’s the future for libraries at Williams?

A great college needs a great library. But the definition of a great library is constantly evolving. Gone are the days of monuments to books. Today libraries are designed around the learning experience: increasingly collaborative, interdisciplinary and fueled by connections to both ancient materials and modern technology. That’s the vision behind Williams’ $80 million Sawyer Library, now under construction and slated to open in fall 2014.

The conversations that have taken place around the project have mirrored those happening on campuses across the country: What’s the right balance of stacks and study rooms? How much space should be given to carrels and the coffee bar? And what can be done to ensure that the new library will meet not just today’s needs but also those of the future?

At Williams, the answer to these questions, in the broadest possible terms, is flexibility. The new library “will support both individual and group study, offer a wide range of seating and provide access to resources from rare books to digital collections,” says College Librarian David Pilachowski. “Having all of this under one roof is what makes this project so compelling.”

“We know that for decades to come, a hybrid model of books and digital resources will prevail,” says Williams President Adam Falk. “But in reality we don’t know what libraries are going to be in 50 or 100 years.”

A Community of Scholars

Pilachowski likens the evolution of the library to what’s taken place in classrooms all over campus. There’s been the growth in the number of disciplines, the rise of interdisciplinary programs, the increase in cross-listed courses. And then there’s what Pilachowski calls “a trend away from individual study to group-centered learning.”

Michelle McRae ’12 is a double major in chemistry and history whose coursework alternates between writing papers and teaming up with classmates to solve problem sets. “We try to meet in classrooms, but there’s just not enough space for all the groups to meet,” she says. “Sometimes we feel like we’re wandering around just trying to find a place to do our homework.”

One of Falk’s mantras since his arrival at Williams in 2010 has been: “Education is fundamentally a social activity.” The new library, which will retain the name Sawyer in honor of the college’s transformative 11th president, is meant to foster the kinds of interactions that fuel learning in ways the current library isn’t configured to do.

Back in the 1970s, when the first Sawyer Library opened its doors, libraries were designed around collections, with individual study in mind. Within two decades, Sawyer had outgrown its 489,500-volume capacity. The college added a lower-level mezzanine, but the expanding book stacks eliminated 200 of the 825 individual seats as well as the student lounge and the handful of spaces meant for group work.

Today, “Group spaces are the most desperately needed spaces in a college library,” says Winston Tabb, a longtime Library of Congress administrator and member of the National Museum and Library Services Board. “Paradoxically, the more students can do online by themselves in their rooms, the more they want to be together.”

Though he emphasizes there’s no single model for the library of the future, Tabb, dean of libraries and museums at the Johns Hopkins University, says the next evolution supports the notion that “people learn from each other. There’s something about learning that’s communal.”

At Williams the new library takes its cue from Schow Science Library across campus, which opened a decade ago and is humming with activity. It’s a progression from the idea of library as quiet research destination to busy knowledge portal—“a locus of intellectual engagement,” says Darra Goldstein, the Francis Christopher Oakley Third Century Professor of Russian. “It extends the whole Williams ethos that we are a community of scholars.”

Classics professor Edan Dekel was 9 years old, perusing the young-adult fiction section of his local library, when his elbow knocked a book off the shelf behind him. It was a biography of Julius Caesar, and its rough, purple cover captivated him.

“At that point, I didn’t know who Julius Caesar was,” Dekel says in an interview for a video project by English professor Shawn Rosenheim about the role of the library in the liberal arts college. Dekel read the book, which sparked his interest in the ancient world.

There’s great value in this kind of serendipity, Dekel and others note, and also in the ways that books and other materials serve as meaningful connections to the past.

“Students need to touch the pages of a book, to feel the historical continuity and understand that a book is an artifact of scholarship,” Goldstein says. “Books aren’t just vehicles for information. They are living things.”

And yet for Rosenheim, “the era of the book is over,” sharpening “the need for shared spaces in which students and faculty can wrestle with the intrinsically social task of teasing meaningful patterns from the ferocious noise of all that has been or is now being said.”

Do libraries still need books? At Williams, where circulation has gone up in eight of the past 10 years, and at colleges and universities across the country, the answer is a resounding yes. But the question of where to house the books, and how much to mix old and new materials, is more difficult to answer.

Recognizing the value of having books on hand, the University of Chicago loaded a million volumes into a warehouse 50 feet below its new library’s main reading room. Drexel University, meanwhile, just built a “bookless learning center” near one of its residence halls. Stanford’s new 6,000-square-foot engineering library has only 10,000 books on the shelves—a decrease of nearly 85 percent from the old library’s holdings. There librarians no longer staff the reference or check-out desks; they are available via email, live chat and Facebook. Patrons can borrow e-readers just as they would books.

Williams, following a path similar to those chosen by Harvard, Yale and Brown, opted for a fully staffed library with a mix of conventional and compact shelving that can hold Sawyer’s entire book collection and then some. Meanwhile, bound journals, microform, videocassettes and certain government documents will be housed in a 10,000-square-foot high-density storage facility a mile and a half north of campus. There they’ll be grouped by size on 30-foot high shelves in a climatecontrolled environment that can hold up to 900,000 volumes. (Including books, Sawyer now has 700,000 volumes. The college’s entire collection—Sawyer, Schow Science Library, archives and rare books—totals just over 1 million.)

Materials requested from storage can be delivered to campus twice daily during the week. That availability, coupled with borrowing networks like NExpress and the Boston Library Consortium—which offer access to 32 million volumes that can be delivered to Williams in a matter of days—reflect what librarians call a shift from a “just in case” to a “just in time” collection that brings the world of scholarship right to the college’s doorstep.

Economics professor Anand Swamy, who studies South Asian economies, says Williams’ library staff—in using powerful borrowing consortia and generally “scouring the earth for materials for me”—is a lifeline for his research. “It’s as if they’ve transformed a very good, small-college library into the kind of library one would expect to see at a larger university,” he says.

Bridging Past and Future

There’s something romantic about libraries of old, with scholars tucked into quiet, secluded study spaces and surrounded by towers of books. Think Stetson Hall (Williams’ iconic library, constructed after World War I to house the college’s then overflowing collection of 80,000 volumes), with its marble floors, dark wood furniture and ornate fireplaces.

A completely refurbished Stetson, with its magnificent, evocative reading room, will become the grand entrance to the new Sawyer Library, the 140,000-squarefoot home to the arts, humanities and social sciences collections, Archives and Special Collections, Chapin Library of Rare Books and the Center for Media Initiatives (CMI). The structure rising now where Stetson’s old additions were torn down will carry a familiar name, but what goes on inside the new library will bear little resemblance to its predecessor.

With design plans calling for fewer than 200 individual study carrels (down from the current 396), a dramatic increase in large tables and study/ project rooms and lots of moveable furniture, there will be plenty of room for improvisation and group work. Librarygoers might be treated to an impromptu poetry reading in a space called “The Forum” or catch a student showing her latest documentary to classmates in a lounge area. A discussion might move from a classroom—either in the library or in nearby Hollander or Schapiro halls—out into the stacks and, later, to the first-floor coffee bar.

Chapin Library, with its original printings of the nation’s founding documents and John Milton’s Paradise Lost, will be set in both historic Stetson and the new space, a bridge from past to future.

Nearby, information technologists in the CMI will support the creative work and research of faculty and students in a suite of project rooms, video-editing studios, a high-definition video conferencing room, recording studio and more.

Given its proximity to faculty offices in Schapiro and Hollander, the CMI “will be more accessible to professors from the social sciences and humanities, many of whom have not used technology as extensively as have faculty in the sciences,” says Dinny Taylor, the college’s chief technology officer.

Students, too, will be able to take advantage of the CMI, whose staff “can encourage them to try new ways to express themselves,” Taylor says. “Text and writing will always be vital to scholarship. But in today’s world, images, audio and video are also central to how we communicate, and they play an increasingly important role in scholarship.”

As users’ needs change over time, the design of the building will allow it to be reconfigured and adapted in ways the current Sawyer can’t. There will be moveable partitions in some areas; shelving can be added or removed; and wiring, electrical cables and other utilities will run under raised floors throughout the entire building. This flexibility can accommodate future shifts between book space and people space without any major renovations.

When students enter the new Sawyer Library in 2014, they’ll pass through the stately Georgian Revival façade of Stetson and into four stories of slate block and glass that house a blend of spaces: historical and modern, quiet and noisy, solitary and bustling—all open to the sunlight and stunning views of surrounding mountains.

Most of these students will never have seen the rabbit warren of faculty offices once attached to the back of Stetson. The old Sawyer Library, with its crowded mazes of stacks and odd spaces, will be shuttered, ready for demolition. And when that building comes down, a new quadrangle of LEED-certified buildings— Hollander Hall to the north, Schapiro Hall to the south and the library to the east—will be home to the humanities and social sciences at Williams.

Pilachowski expects traffic in the new library to increase by 40 percent to 50 percent over the current 250,000 users per year. Faculty and students will come for quiet, individual research and study as well as the buzz of collaborative work. They’ll find staff ready to share their research and technological expertise, offering access to some of the earliest extant books, the newest digital collections and everything in between.In short, he says, “People are going to want to be in this building.”

Sure, people will still be able to access huge resources sitting alone, staring at a screen. “But the social dimension of studying is at the heart of why we create colleges,” President Falk says. “If that weren’t important, we would just mail students the books. Now we can say: Be a part of the community. Go to the library.”

Louisa Kadson is a freelance journalist based in Boston.
Image credit: Renderings courtesy of Bohlin Cywinski Jackson, image of view from Main Street by Woodruff/Brown Architectural Photography
Print this page