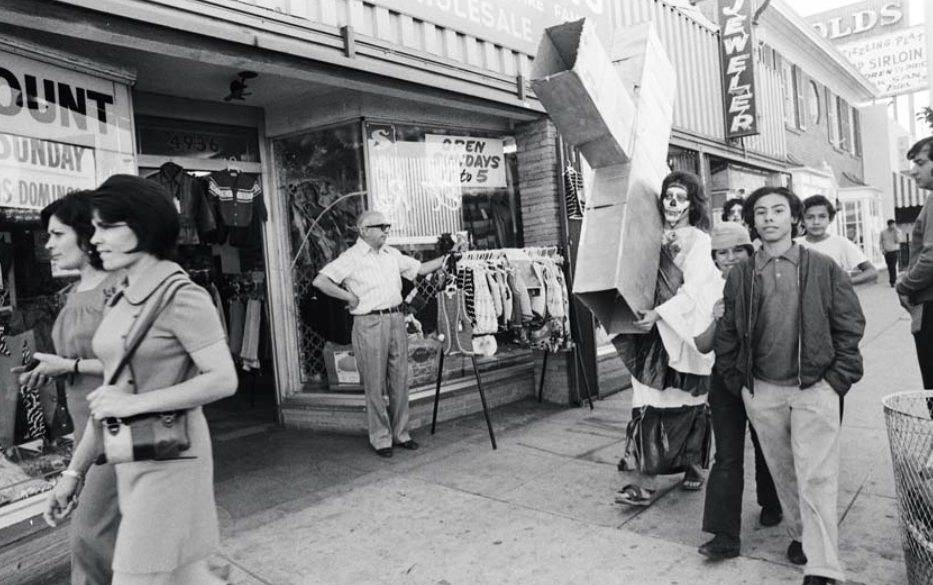 “Chicanos make graffiti, not art.” That’s essentially the answer a curator at the Los Angeles County Museum of Art (LACMA) gave Harry Gamboa Jr. in 1972, when Gamboa asked why there wasn’t a single example of Chicano art on the walls. Gamboa returned to the museum that same night with fellow artists Gronk and Willie F. Herrón III to sign their names outside the entrance. They photographed Patssi Valdez, another artist, at the site the next morning. It was “a response that was collaborative and aesthetic and ‘agitational,’” says Williams art professor C. Ondine Chavoya, who has spent two decades studying Asco, the performance and conceptual art group started by the four youngsters, who met in and around Garfield High School in East L.A. in the late ’60s. “They responded by signing the museum as their own work of art and in the process made it the largest work of Chicano art ever exhibited anywhere.” Forty years later, the photograph Spray Paint LACMA is part of the Williams College Museum of Art’s “Asco: Elite of the Obscure, A Retrospective, 1972-1987.” The show, which opened in February after three months at LACMA, is co-curated by Chavoya and Rita Gonzalez, LACMA’s associate curator of contemporary art. The exhibition has attracted a flurry of attention from Williams professors looking to use the artworks to explore with their classes the aesthetic, social, cultural, historical and political contexts of Asco’s work–as well as the group’s experimental and collaborative processes. It’s also struck a chord with students, who are around the same age as Asco’s members when they formed the group. As Record executive editor Megan Bantle ’14 wrote in a review of the show: “Asco saw a gap in its society and claimed responsibility for filing it. …[They] introduced an entirely new mode of expression to comprehend and change the problems in the world around them.” Though Asco, which means “nausea” or “disgust” in Spanish, worked outside the mainstream, Chavoya says, “They were well aware of the institutional powers at play” in the art world, museums, education, law enforcement, mass media, the military and government structures. “They were trying to shock people out of their normal patterns of behavior and perception.” Featuring nearly 150 works and an award-winning catalog overseen by Kathryn Price MA ’02, the college museum’s curator of special projects, the exhibition runs through July 29. Last month the Alumni Review sat down with Chavoya, whose expertise includes Chicano art. to talk about some of Asco’s more salient images. 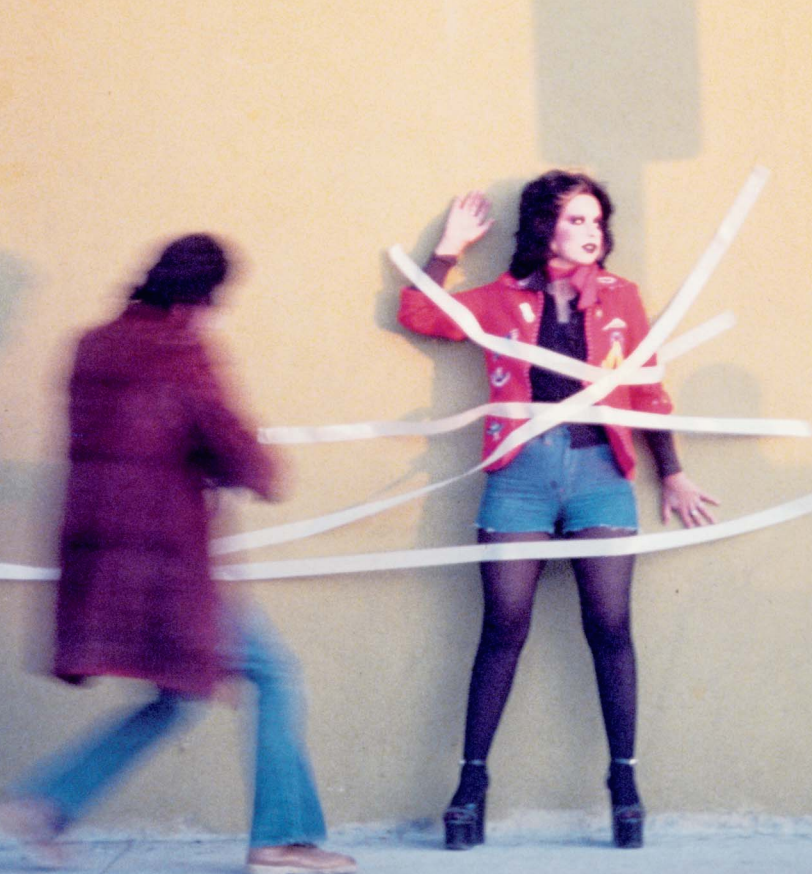 Instant Mural: What does it mean to be young and poor and Chicano in East L.A., given the social and historical context of the early ’70s? Instant Mural is a metaphor for thinking about how people can be confined in conditions of oppression or discrimination, poverty and other social—and psychological—issues. Gronk (left) is experimenting with making a temporary, live diorama using the most economical and available means—masking tape and a body (that of Patssi Valdez). Patssi looks frozen and confined, but we know that it’s not literal, that she could break free at any time. So there’s play between movement and stasis, and inaction and agency. There was no one on site explaining to the public what was going on, no “Come and see a performance by…” It’s meant to provoke the passers-by who saw it, to get them to think about what was happening and what it might mean. With the photograph, taken by Harry Gamboa Jr., Asco could circulate the power of their message and ideas to an even broader audience. Asco, Instant Mural, 1974, color photograph by Harry Gamboa Jr. Courtesy of the artist. © Asco; photograph © 1974 Harry Gamboa Jr

Stations of the Cross

Stations of the Cross: On Christmas Eve 1971, Asco took over Whittier Boulevard, the main commercial artery through East L.A. and the site of various political demonstrations and activities. Willie Herrón, Harry Gamboa Jr. and Gronk (not pictured) mounted a silent, mile-long procession evoking traditional religious iconography, some of which, like Day of the Dead, was closely associated with Mexico. But the artists infused the procession with anti-war protest, carrying the 15-foot cardboard cross to a nearby Marine Corps recruiting center and using it to blockade the door. It was a way to bring attention to the violence, death and sacrifice of young Chicano men and other people of color in the Vietnam War. Chicanos at that time accounted for the highest casualty rates of all ethnic groups during the conflict in Southeast Asia. That day, photographer Seymour Rosen was in East L.A., looking to document how Mexican-Americans celebrate Christmas. He happened upon the unscheduled protest—Asco’s earliest known public performance—and took this picture. It implanted in the artists, particularly Harry, the idea of using photography to document their work and share their ideas with a wider public. Seymour Rosen, Asco’s Stations of the Cross, 1971, gelatin silver print. © SPACES–Saving and Preserving Arts and Cultural Environments 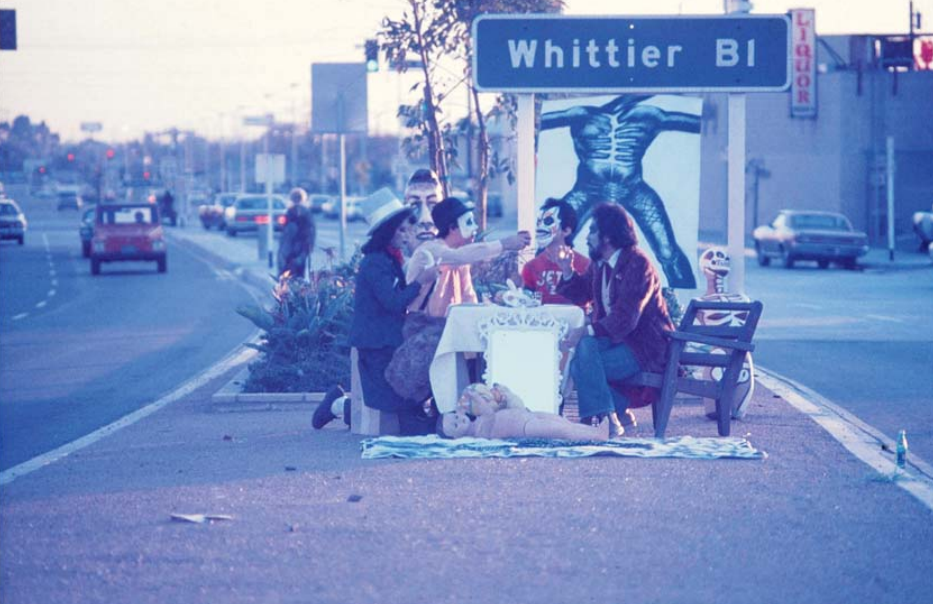 First Supper (After a Major Riot)

First Supper (After a Major Riot): This is a spontaneous urban theater piece and intervention. The artists are literally occupying a traffic island at the site where there had been mass demonstrations and violent collisions with police a few years earlier. It’s 1974, not long after the islands off the coast of California were actually being “occupied” by different social groups to bring attention to colonialism and the occupation of Mexican and Native American territories. The painting in the background is an early work by Gronk called Terror in Chile, a reference to political turmoil, violence and repression in South America, which the artists are connecting to East L.A. So Asco is creating a conceptual alliance that extends between Chicanos in East L.A. and those across the Americas. Asco, First Supper (After a Major Riot), 1974, color photograph by Harry Gamboa Jr. Courtesy of the UCLA Chicano Studies Research Center Library. © Asco; photograph © 1974 Harry Gamboa Jr. 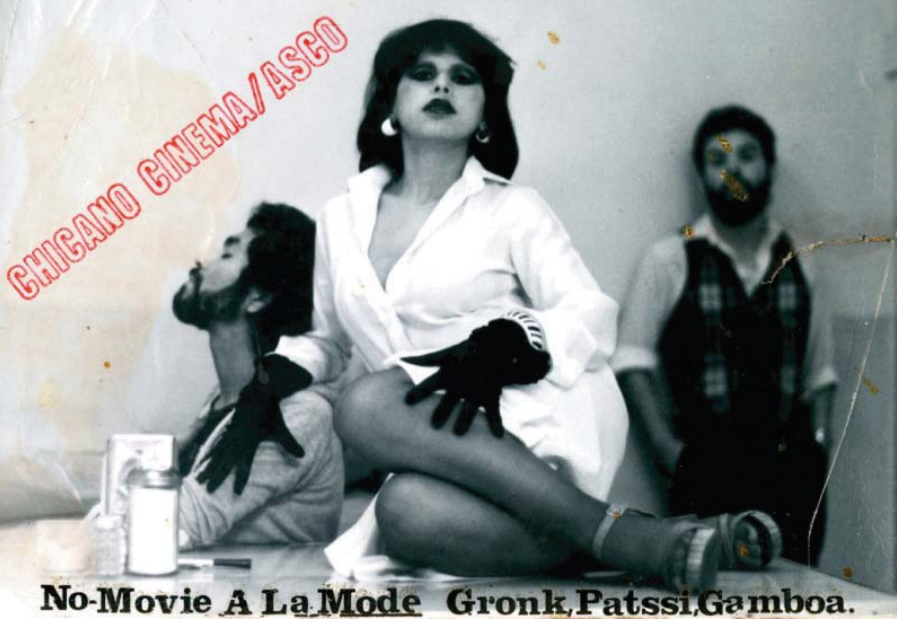 À La Mode: Asco was interested in expanding the roles and representations of Chicanos and Latinos in mass media, which they felt were limited to the stereotype of the cholo or the chola—the kind of urban homeboy or homegirl—or some type of criminal, maid or gardener. They did this by performing in various kinds of “No Movies,” a concept the artists invented. They created scenes as if they were posed from or for cinematic productions. The artists played the roles of director, cinematographer, actor, makeup artist, hair stylist and set designer. They would then circulate these images, as if they were stills from Chicano-produced motion pictures, to the news media and through mail-art circuits, which were networks of artists exchanging information and artwork through the postal system nationally and internationally. Asco, À La Mode, 1976, black and white photograph by Harry Gamboa Jr. Courtesy of the UCLA Chicano Studies Research Center Library. © Asco; photograph © 1976 Harry Gamboa Jr. 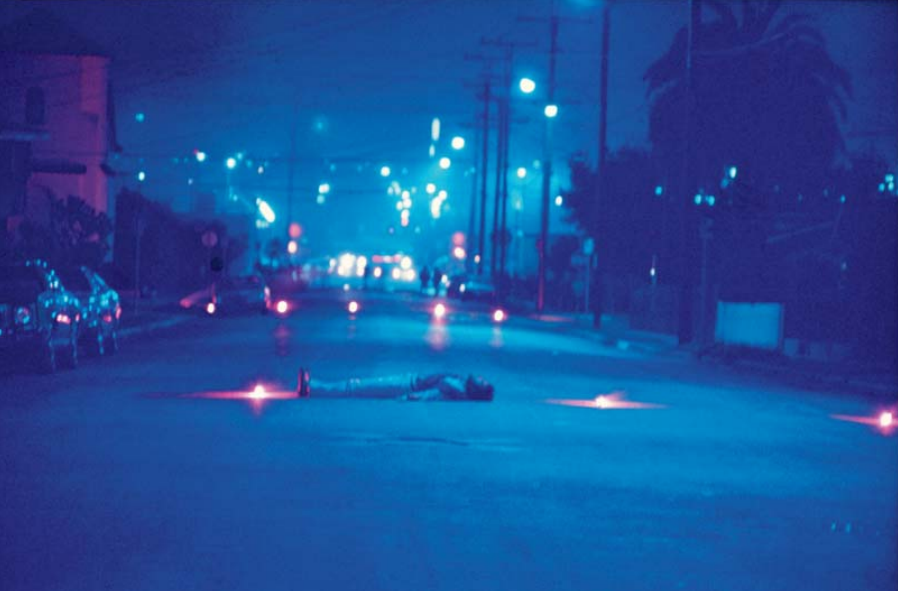 Decoy Gang War Victim: This is public performance and urban intervention, with Gronk posed as the apparent victim of some type of gang violence. The artists have blocked the street with his “dead” body to bring attention to the cycle of violence in their neighborhoods. Asco’s thinking was: If they could substitute fake murders in areas where they thought new violence would happen, then perhaps they could intervene into the cycle of violence and end it. They were also concerned that the news media’s sensational coverage of violence in East L.A. was causing even more violence. At the time, Asco didn’t have access to the media or to the political system; the artists felt they, and Chicanos in general, weren’t being properly represented by either. They were interested in poking holes in the power of the media and so tried to pass this photograph off as a legitimate image of violence. (One local TV station actually ran it.) Asco was playing with the idea that if they could dupe the media, maybe they could get people to think critically about how the media might be duping them. Asco, Decoy Gang War Victim, 1974, color photograph by Harry Gamboa Jr. Courtesy of the artist. © Asco; photograph © 1974 by Harry Gamboa Jr. 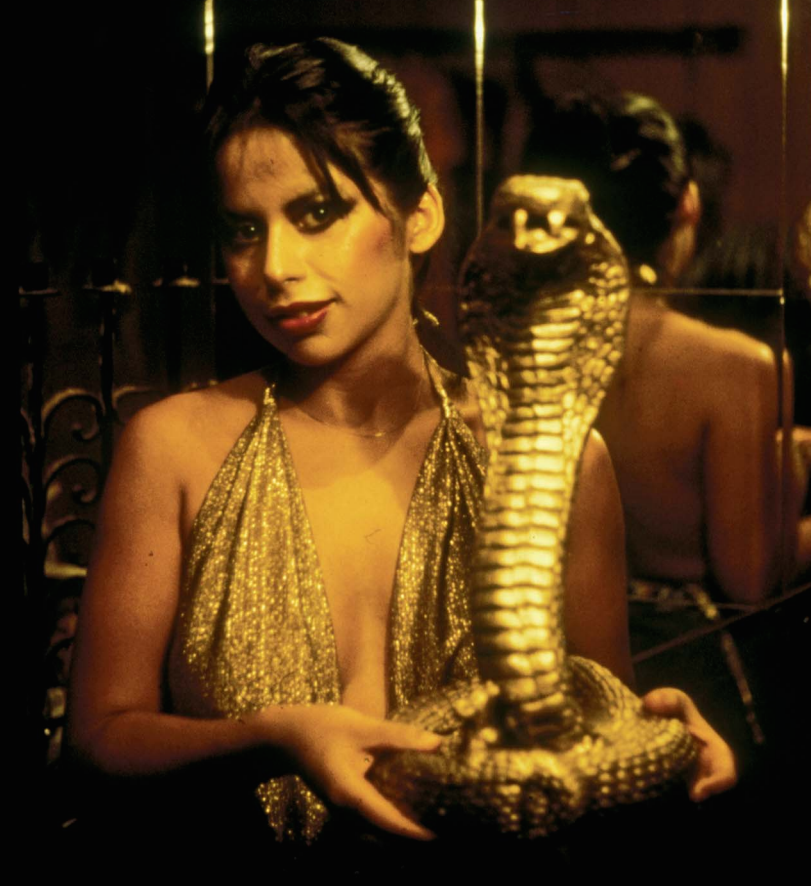 Patssi Valdez receiving No Movie Award for Best Actress: Taking the “No Movies” a step further, this is a performance play or parody of the Oscars and other glamorous ceremonies. Asco spray-painted a dime-store cobra gold and presented this “award” in a number of different categories celebrating artists’ contributions to “No Movies.” Patssi is wearing a top she created by folding fabric to look like a gown. The artists are manipulating the imagery and available materials to give an impression of radiant glamour. They were actively recreating themselves and asserting their desires to be artists and filmmakers and part of the Hollywood media culture, realigning themselves around their community in a radical and rebellious way, and in a playful and thoroughly imaginative way. Asco, Patssi Valdez receiving No Movie Award for Best Actress, c. 1976, color photograph by Gronk. Courtesy of the artist. © Asco; photograph by Gronk