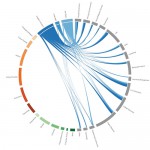 Math majors Hayley Brooks ’12 and Kaison Tanabe ’13 know that a liberal arts education is supposed to prepare students for life, not train them for specific careers. Still, they were curious about the relationship between college major and career path.

The two students, together with associate professor of mathematics Satyan Devadoss—and with the help of the college’s advancement information systems director, Mike Reopell—set out to not only see what the data had to say but also to organize it in a way that anyone could understand.

Last spring, as their final project for Devadoss’ tutorial on phylogenetics—a subfield of biology dealing 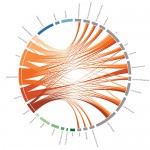 with identifying and understanding relationships between living things—Brooks and Tanabe sifted through some 15,600 alumni records. Using software called CIRCOS, which was initially developed for visualizing genomic data, they organized the data so it could be displayed in a circular layout, ideal for showing the relationships between majors and careers. They grouped majors into 15 categories that occupied the left half of a circle. They then grouped the many career fields represented in the college’s alumni database into 15 categories that occupied the right half.

The resulting image tells the story in a way that Brooks and Tanabe say a spreadsheet can’t. The strongest correlation is between biology and chemistry majors and health/medical careers. But, for the 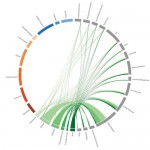 most part, the visualizations show diverse career paths regardless of major.

In other words, the project is a data-driven affirmation of the most basic liberal arts message.

“It really doesn’t matter what you major in,” Brooks says. “You can be a history major and go work in information technology.”

Or, as Devadoss says, “You can study what you love and then go do what you want.”

Devadoss and his students are now exploring ways to take the visualization project to other academic institutions, especially ones more focused on training students for particular careers, to see if the results differ. 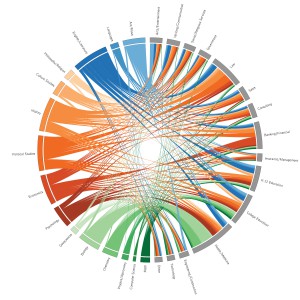 Tanabe is also working with Devadoss this year to examine whether having a double or triple major makes a difference in career path. They’re also studying how the relationship between major and career path may have changed over time. “Twenty years ago,“ asks Tanabe, “did it matter more, or less, what major you chose?”

Visit http://bit.ly/Devadoss to view career paths by individual majors and by academic divisions.