Danger in the Classroom 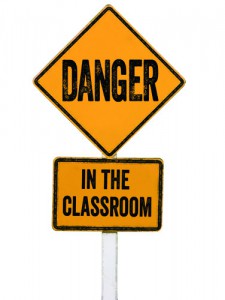 When history professor Magnus Bernhardsson was asked to serve as the college’s Gaudino Scholar in 2011, the Arab Spring was in its early days. “I was impressed with the lengths to which young people were willing to put themselves in danger to implement change,” he says. Working to shape opportunities for experiential education and uncomfortable learning for the campus community in his new role, he saw great potential for the interdisciplinary study of danger. Some professors were already teaching courses that, with some modification, perfectly fit the theme. Others were inspired to develop new classes altogether. Among the 18 dangerous courses being offered this year:

Beauty, Danger, and the End of the World in Japanese Literature, a comparative literature and Japanese course, explores the spectacle of destruction in Japanese writings across the generations.

Dangerous Exposures: Environment, Immunity, and Infectious Disease, a biology tutorial, studies the ecology and evolution of recently emergent diseases such as SARS and AIDS.

Dangerous Leadership in American Politics, a political science and leadership studies tutorial, asks how—and whether—we can distinguish between leadership that is desirable and that which is dangerous (or perceived to be so) in today’s world.

Dangerous Music, a music tutorial, covers the historical, cultural, and global contexts in which music has been intertwined with violence and harm.

Financial Crises: Causes and Cures, an economics course, examines why financial crises are a regular fixture of societies and what can be done to prevent them—or at least reduce their cost.