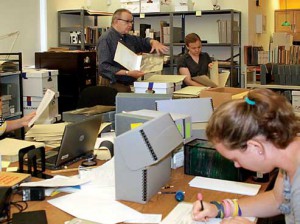 It’s one thing to read a poem by Langston Hughes. It’s quite another to hold an inscribed, first edition of his work—one with a signed birthday card or personal note from him tucked into the pages.

These are the kinds of treasures Bob Volz, custodian of the Chapin Library of Rare Books, is unearthing as he pores over the library’s latest acquisition: The Breman Collection. Consisting of some 4,000 volumes assembled by Paul Breman, an antiquarian bookseller with a lifelong passion for black poetry, the books and related ephemera are, says Volz, ”one of the most focused and skillfully crafted collections of printed sources that I have encountered in over 45 years as a rare-book librarian.”

Breman was studying English at Amsterdam University in the late 1940s when he became interested in jazz and jazz lyrics, tracing their roots to a black poetical tradition based in spirituals and slave songs. He discovered the tradition was being kept alive by black poets, many of whom were working in obscurity.

He set out to uncover and collect song lyrics, poetry, and other writings from blacks across America, the Caribbean, and English-speaking Africa. Their works became the basis of two anthologies Breman published and his pioneering Heritage Series of Black Poetry: 25 volumes spanning 1962 to 1975.

Along the way Breman developed deep, lasting friendships with the poets, who admiringly called him ”that crazy white boy in Europe who takes us seriously.” His personal correspondence with them has been found in many of the volumes he collected and in separate files of prominent friends such as Hughes, W.E.B. DuBois, Waring Cuney, and Ronald Fair. There are also woodcuts and pen- and-ink drawings of some of the poets, broadsides, leaflets, and obscure texts such as tiny poetry pamphlets in translation.

The collection, which Volz says constitutes ”a large portion of 80 years of the extant black poetry in English,” includes other ”big names” like Gwendolyn Brooks, Nikki Giovanni, Audre Lorde, and Williams’ own Sterling Brown ’22. Yet ”many of the poets Breman collected weren’t widely published,” says Andrew Langston ’13, a philosophy major who worked over the summer with Volz and two other students to organize the materials. ”Students now have the opportunity to read the work of these underground writers.”

Africana studies professor Rashida Braggsis one of several faculty members who have expressed interest in teaching with the collection. ”Observing an original edition with a photo, note, or signature makes figures like Langston Hughes come to life for students,” she says. ”I look forward to the opportunities for more interactive and engaging learning that the collection offers.”