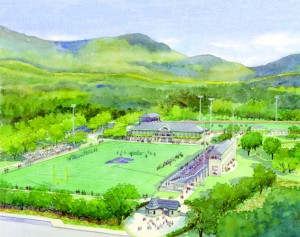 The Board of Trustees voted in October to proceed with a $22 million project to renovate and re-invent Weston Field. The project was one of two put on hold in 2008 during the global financial crisis—the other one being construction of the new Sawyer Library, slated to open in fall 2014.

Delaying the Weston project gave the college time to take “a holistic look at how the complex could best support our approach to athletics, with its emphasis on broad participation and excellence within Division III,” wrote President Adam Falk in an Oct. 15 letter to the Williams community.

The renovation will provide much-needed new facilities for varsity field hockey, football, men’s and women’s lacrosse, men’s and women’s track, and recreational users. The new facilities also will allow increased junior varsity, club, intramural, and recreational use of Cole Field. Emphasis will be placed on green design and the environmental stewardship of the surrounding area.

Construction is expected to begin after the 2013 fall athletic season and be completed by fall 2014.