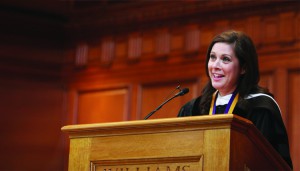 “If you have those things, you’re going to be a superstar, no matter what you do,” she said, addressing the senior class at Convocation on Sept. 8.

Burnett, host of CNN’s Erin Burnett OutFront, was one of five alumni to receive a Bicentennial Medal from the college for “significant achievement in any field of endeavor.” The other recipients were Kathleen A. Merrigan ’82, deputy secretary of the U.S. Department of Agriculture; David S. Paresky ’60, a travel industry pioneer and philanthropist; Norman P. Spack ’65, an internationally recognized pediatric endocrinologist; and Charles N. Waigi ’72, founding director of Kenya’s Jeremy Academy (featured on p. 24.)