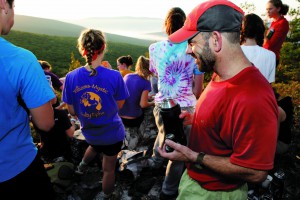 They gather at 6:03 a.m. on the steps of Chapin Hall. Thirty-one students and a recent graduate, many of whom are meeting each other for the first time. In the pre-dawn darkness they board two college vans that transport them to the Pine Cobble trailhead, a major ramp onto the Appalachian Trail.

As the vans empty, Outing Club Director Scott Lewis begins his signature pep talk: “Every Friday is Mountain Day! Who’s here? What year are you? Have you ever done this before?”

“Welcome, all!” Lewis continues. “Isn’t this a great day? You’re in for a great treat, ’cause your endorphins will be rejoicing all day long. The trip up’s about a mile-and-a-half and a 100- to 200-foot change of elevation. It’s a great hike and my favorite thing to do every Friday morning.”

In fact, Lewis has led this hike with students nearly every Friday since he arrived at Williams in 1992. In the early years, the hike attracted four or five participants at a time. Then Rob Silversmith ’11 made a point of showing up every week, and word began to spread. Lately the numbers have crept into the 20s and 30s. Even President Adam Falk has joined in—more than once.

On this mid-September morning, the group sets out at a fast clip and fills the Berkshire woods with chatter. The path steepens, and the pace—and chatter— slow. Forty minutes and three long switchbacks later, they stop at a three-trunked locust whose base is a natural bowl filled with water. Lewis calls it the Elfin Fairy Tree, and he explains that if one’s reflection in the water is clear, he or she will be granted a wish. From there a five-minute scramble brings the students to the eastern summit, where they can look out across North Adams to Route 2’s hairpin turn.

The sun crests the far hills as the crew enjoys hot chocolate and mini-muffins that Lewis hauled up in his large backpack. Then comes a two-minute hike across the summit for the view.

At first, there’s silence as the students slowly realize they’re looking down on the place where they go to college.

“I think it’s The Science Center…”

When the students have had their fill, it’s a shorter tramp back down to the vans that will get them back to campus in time for 9 a.m. classes.