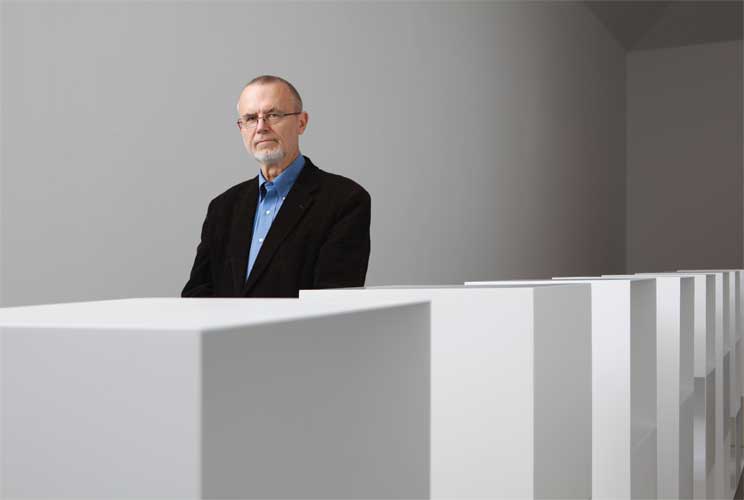 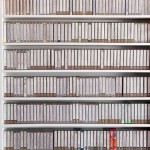 A shared love of classical music initially drew art history professor Charles “Mark” Haxthausen into the world of Sol LeWitt. And a 2010 visit to LeWitt’s Connecticut home—where Haxthausen discovered 4,000 audio cassettes, meticulously catalogued and shelved in the manner of the artist’s iconic wall drawings—inspired the concept for the Williams College Museum of Art exhibition Sol LeWitt: The Well-Tempered Grid, on view through Dec. 9. Curated by Haxthausen, the exhibition explores the centrality of the grid and the ideas of theme and variation in LeWitt’s art. We asked professors across the curriculum to share, in their own words, how these principles—and objects they’ve selected from the exhibition—inform and inspire their own work.

The Grid and Dance

Erica Dankmeyer '91, acting chair and artist in residence in dance 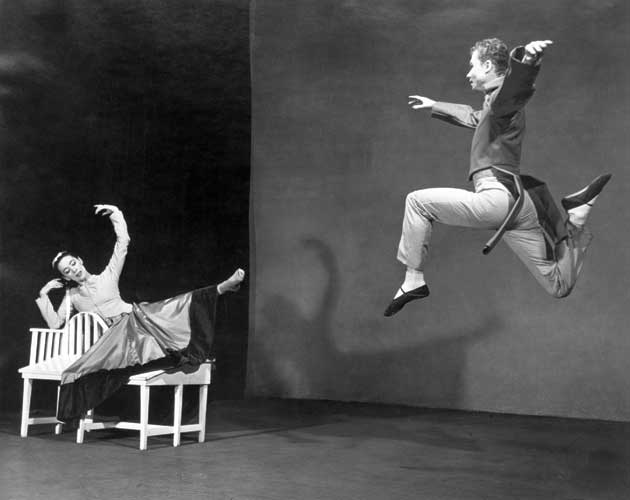 Sol LeWitt’s repertory of lines—and his prolificacy—make me think about Martha Graham. Graham developed a distinct movement language and repeated motifs from that language to create her theater. Her repertory includes pitch turns, contraction falls to the floor, and recoveries—all movements she claimed she didn’t “invent” but rather “rediscovered” to express her ideas. Once she’d taught her dancers her technique, it was up to them to interpret her ballets. She was conflicted about sharing her roles and often left dancers to rehearse on their own. She also gave conflicting messages about the perpetuation of her work, claiming she was interested in innovation but not reproduction.

Like Graham, LeWitt abandoned his art for others to execute, putting his ideas at the forefront and letting the art be secondary. He conceived a situation in which draftspeople would be executing his work based on his directions and under varying circumstances. He said that some versions would be closer to his idea than others, especially those generated by draftspeople who worked with him over time. But he did not consider any of the works “lesser;” his process celebrated seriality.

Like LeWitt’s draftspeople, dancers create and revive the work of choreographers. When you dance a masterwork, you have a responsibility to honor its legacy. Your performance is compared to the collective memory. There is something special about the original cast and the moment in time when the work is born. But younger generations bring new ideas and different training to their art.

In choreographing LeWitticisms (an evening of LeWitt-inspired music and dance performed at MASS MoCA on Nov. 1), I looked at the repertory of lines in works such as Bands of Color in Four Directions. The patterns and the way the colors shift invite a certain character of movement and teaches me rules about directionality. LeWitt’s work has a rhythmic, energetic quality to it. You’d think working within his specific parameters would be limiting. But as you go deeper into the enforced rules, they become expansive. 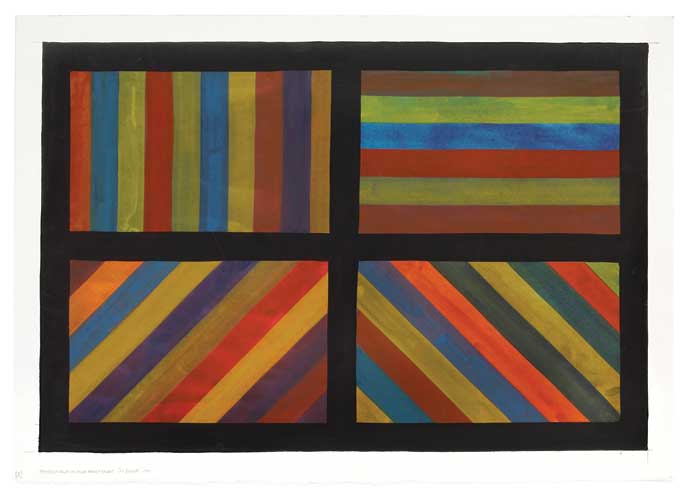 The Grid and Neuroscience 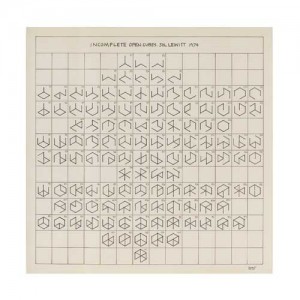 Sol LeWitt’s use of basic elements of visual sensation, lines, and simple shapes evokes research by Gestalt psychologists in the early 20th century. The mind creates a narrative from the elements sensed by the eye, a narrative that cannot be deduced from summing the singular entities alone. Neuroscientists can now better understand how this narrative is constructed.

The brain doesn’t receive a camera-like picture of the real world. Complicated processing of the visual field first occurs in retinal cells. This “lower level” perception extracts a selective portion of visual information and relays that information to the primary visual area of the brain, which can only recognize the angle and length of lines. The primary visual area sends that line information for perception of shapes, objects, and scenes to other brain regions. Simultaneously, “higher” brain areas are generating hypotheses about what you are seeing based not only on that information, but from memory. Signals are then sent back to the primary visual area—and even back to the retina—to influence what we think we are seeing. This “top-down” processing accounts for the Gestalt Principles of Perception.

Although LeWitt may appear to be activating only lower level vision by the use of simple line elements, it is impossible for the viewer to restrain top-down processing. Examples of Gestalt Principles can be found in many works in the LeWitt exhibit. In Drawing Series I/3241/A&B, both the similarity and proximity principles cause us to deduce inner squares composed of four adjacent squares of similar horizontal lines in the center. Schematic Drawing for Incomplete Open Cubes illustrates the closure principle, automatically filling in missing information from memory. Some lines provide enough clues to allow us to mentally construct the cube, others suggest different objects or shapes. Sometimes the cube is open toward us, sometimes away. These are visual hypotheses that the mind constructs. 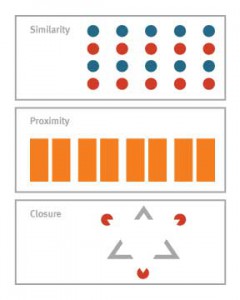 The Grid and Music 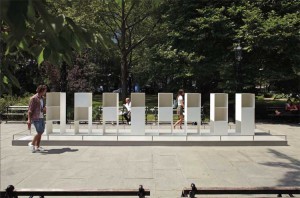 Despite its modern guise, Sol LeWitt’s Three-Part Variations on Three Different Kinds of Cubes 3 3 2 bears a number of structural relations to the music of J.S. Bach. LeWitt’s Three-Part Variations explores the ways three different kinds of cubes—solid, open on one side, and open on two opposite sides—can be uniquely assembled in stacks of three. In various studies for the piece, LeWitt enumerates distinct arrangements of cubes, distinguished not only by kind but also by the relative orientation of the open sides. The steel installation at WCMA presents eight columns that exhaust the distinct arrangements of two single cubes, open on one side, set atop a cube open on the opposite side. Proving that the combinations are exhaustive is, for me, part of the intellectual delight of this and other of LeWitt’s combinatorial works. 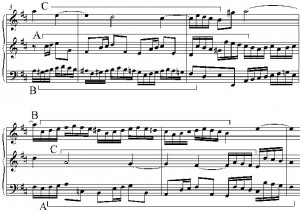 LeWitt’s fascination with combination and permutation evokes the Baroque Ars Combinatoria, as manifest in the great contrapuntal works of J.S. Bach. Bach’s Three-Part Invention in D major systematically and exhaustively explores the permutation of three distinct melodies, labeled A, B, and C. At the first simultaneous statement of all three melodies, Bach places the main melody A in the middle voice, B in the bottom, and C on top; thereafter Bach places A on the bottom, B on top, and C in the middle. In subsequent statements, Bach presents all remaining permutations of the three melodies, from top to bottom: ABC, CBA, BAC, and ACB. Although three stacked cubes and three stacked melodies seem an obvious parallel, LeWitt’s combinatorial works share with Bach’s a more general aesthetic of variety—recasting the same elements in ever new ways—and it’s in the contemplation of their respective variation principles that each work can inform and sharpen our attention to details of the others.

The Grid and Computer Science 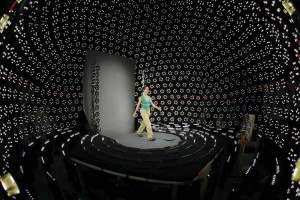 Sol LeWitt’s work is art through computation. He separated the wall drawing from the processes of designing and executing its specification. He produced the written description, which is a program. It happens to be a program with instructions for a draftsperson instead of a machine. For LeWitt, the process is primary, and the artifact of the actual drawing is secondary. Computer graphics are about creating art through computation by focusing on the process and specification, just as LeWitt did.

Furthermore, the main ideas of computer science—abstraction, enumeration, integration—are the core ideas LeWitt is exploring visually. This is a wonderful resource for a computer science student, and I regularly use LeWitt’s work in the classroom to illustrate complex concepts. For example, LeWitt’s sets of stacked cubes explore enumeration. He’s iterating through every possible way to orient these cubes. It’s logical and mathematical. Computer science picks up the trail that LeWitt starts here by providing the tools to understand and harness enumeration when the combinations become too complex to list explicitly. 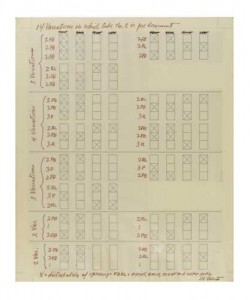 LeWitt would need 216 figures to work out all ways to arrange three identical cubes in a stack. And for him, working out and showing those arrangements was the artistic goal. My students can recognize this and then leverage the science and engineering to extract any figure from the pattern without drawing all of the cubes. When you have trillions of complex patterns—think about Facebook’s or Google’s databases—you need a way of reasoning about the pattern. You can’t look at every possible combination of two friends on Facebook and analyze that data. You have to somehow abstract the pattern. LeWitt’s work is a great way to engage the students visually, help them to appreciate the cultural value, and then seamlessly bring that value into our domain and reveal a deeper computational concept.

The Grid and Archaeology 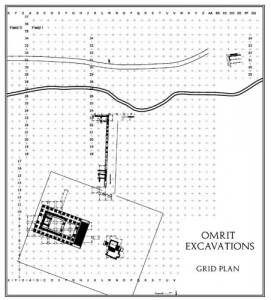 When starting an archaeological excavation, one of the first things you do is lay out a grid plan over your site. The grid provides structure to your work and gives the three-dimensional space you’re working in some coherence; without it, there is no way to convey your results to other archaeologists accurately.

As you dig within sections of the grid, you also dig down within layers. When you find an object, you give it X, Y, and Z coordinates. LeWitt’s work, particularly Series ABCD, is evocative of this process.

While the grid is used to establish a general organizing principle, in the end, every archaeological excavation is unique, just like LeWitt’s artworks. There’s an artistic process to interpreting what you find on an archaeological dig. For example, during a dig in Omrit, Israel, over the summer, my students and I excavated a Byzantine house full of pottery that had been smashed by a collapsed wall. We can reconstruct and date this pottery because it conforms to known types. But what does it mean? Who used it and for what? What can this pottery tell?us about the lives of the people at Omrit? There is no grid-planned answer to these questions. The grid simply acts as a starting point, the pottery as a muse. 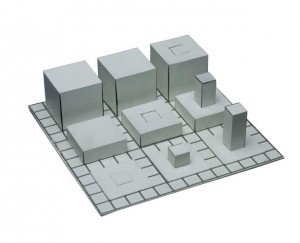 Many people think of archaeology as a science, and it’s true that we do use a scientific methodology to study our data. But ultimately archaeology is an interpretive field; I’ve always thought of it as one of the most humanistic of all academic endeavors. And it all starts with a grid.