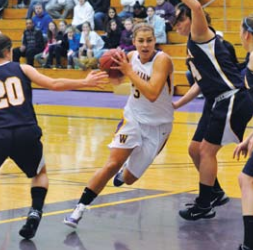 An early USA Today poll ranked women’s basketball 13th in the country in December. The Ephs were off to a 7-0 start, propelled by what coach Pat Manning characterizes as “tremendous focus and drive” as well as the experience and depth that come with 12 players fresh from last year’s success on the court. (The Ephs advanced to the Sweet 16 round of the NCAA Tournament.) Led by senior captains Chessie Jackson, Maddie King and Taylor Shea, the team also has an asset in Jill Greenberg ’12, who, in her three years as starting point guard, Manning says, has “grown tremendously and become a floor leader.”