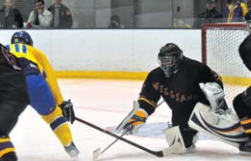 Goalie Ryan Purdy, a NESCAC Player of the Week

With 18 of 19 starters returning from last year, “Any given night, anybody can contribute,” says men’s ice hockey coach Bill Kangas, who’s in his 22nd year at Williams. His statement rang true when the Ephs, in a rare no-penalty game (their first contest on the road), won 6-1 against Babson in November with six different scorers. That win was followed by a 7-1 victory over Southern Maine, again with six different scorers, launching the team to first place in NESCAC standings—and fourth nationally—in early December with a 6-0-1 record.