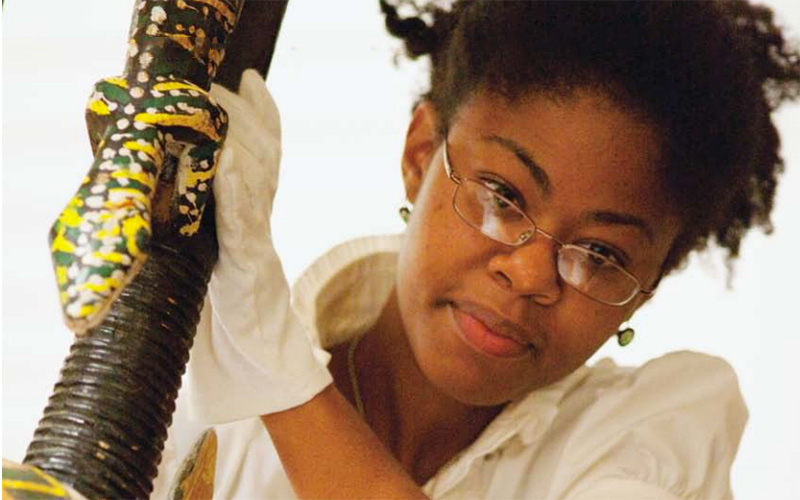 Mellon Curatorial Fellow Dalila Scruggs explores both her own identity and that of the College museum.

Out-of-the-box thinking was instilled in me as a kid growing up in Miami, Fla. I was in a “gifted” elementary school class that allowed the students to play with Legos, write stories and engage in brainstorming exercises. I never quite learned all the state capitals, but I learned to generate 20 different uses for a sheet of lined paper. This passion for looking for unexpected connections continued in college, where I managed to study “the image of the black” in just about every art history class I took, including writing papers on the representation of blacks in ancient Greek art and Venetian painting of the 16th century. My dissertation on visual images and propaganda generated by the American Colonization Society, a white-run organization dedicated to encouraging African- Americans to move “back to Africa” in the 19th century, shuffled together two distinct decks of cards—the literature on early Liberian history and that on 19th century American art. Sometimes I worried that the work was not all that “innovative.” Yet I was willing to see connections that others had ignored or were unable to see.

Forging creative links between disparate objects and ideas is crucial to the project of reinstalling the permanent collection in Williams’ museum. I am working with curatorial and education staff on two reinstallations. The first, “Object of Art,” exposes the museum as an institution that transforms “stuff” (found objects, archeological ruins, painted pictures) into art with a capital “A.” The second reinstallation re-envisions the museum’s presentation of American art, exploring the social and stylistic influences that create and transcend the physical geopolitical borders and socially constructed boundaries that shape the U.S.
In both cases, integrating African and African-American art into the exhibition narrative is one of my most important directives. Too often African and African-American visual production are seen as isolated endeavors, hermetically sealed from the rest of art history. Museums tend to display art according to national school or chronology, but we’re seeking thematic continuities across time and cultures, so that an ancient Etruscan vase can be positioned next to a 20th century Bakota reliquary.

The project has given us an opportunity to rediscover the museum’s collection, including objects we’ve been calling “forgotten treasures.” For example, I’m including the Robison Family Silhouette by an anonymous 19th century artist in the reinstallation of the American art galleries. More than a quaint relic of early American visual culture, this little silhouette is an artifact of the democratization of portraiture. I also like it for its connections to contemporary art; it’s precisely the source material that informed Kara Walker’s large-scale wall murals. One of the first major publications on Kara Walker was published by the museum.
We’re also gaining a deeper understanding of the strengths and weaknesses of our collection. In the American art reinstallation, we’re exploring the influence of Mexican muralists on American artists in the 1930s and ’40s (the brainchild of graduate art history student Allison Pappas, Class of 2011). Surprisingly, we have a number of works by social realist artists from Mexico, including Diego Rivera, Ignacio Aguirre and Miguel Covarrubias. Acquisitions of key African- American artists can enrich the story of cross-cultural, cross-border exchange. Well-known artist Elizabeth Catlett moved to Mexico in the 1940s and never lived in the U.S. again. She worked under the tutelage of some of the Mexican artists represented in our collection, including Ignacio Aguirre. I want to help people see African-American art as part of American art and African-American artists as creative agents actively engaged in global artistic exchanges.

Having familiarized myself with the African art collection, I would love for the museum to acquire Islamic art from sub-Saharan Africa. One of my undergraduate professors from Cornell, Salah Hassan, used to call Islam the “first wave of colonialism” in Africa. This framing of Islam in Africa de-centers European colonialism as the key influx of outside influence and power. Instead, through Islamic art in Africa we have to recognize the cross-cultural contact between various ethnicities within Africa as well as long-standing trade routes and political alliances that link Africa with other parts of the globe.

Ultimately, I would like to think that my role as Mellon Curatorial Fellow is not just about my identity as an African-American woman, nor simply about my academic focus on African-American art. Rather, I hope the “diversity” I bring to the museum is the creative synergy of bridging disciplinary divides to interpret art as a site of cross-cultural contact, stylistic influence and intellectual exchange.

Dalila Scruggs is halfway through a three-year term as the museum’s Mellon Curatorial Fellow for Diversity in the Arts. She’ll be teaching “From Slave Quilts to Post-Black Canvases” in the spring.
Print this page