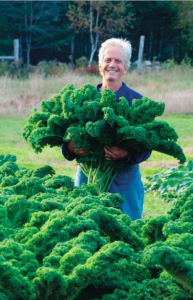 “If I had studied Ag in college, they would have convinced me that what I do every day is impossible,” says vegetable farmer, educator, researcher and author Eliot Coleman ’61. Best known for growing vegetables year-round in unheated greenhouses in northern Maine, Coleman has been called America’s most innovative small farmer. Not only is he reinventing the harvest, he’s helping to turn the economics of small farming upside down.

The story began when Coleman read Helen and Scott Nearings’ Living the Good Life, the best-selling classic of the ’60s credited with spawning the era’s homesteading movement. “I thought they were crazy,” he recalls. “They didn’t eat peas in the winter because peas didn’t grow in the winter. I thought: What’s wrong with the freezer?”

But Coleman, a second-generation Eph who majored in Spanish literature because he spent his summers managing a ski lodge in Chile, was attracted by the Nearings’ independence and ability to survive against all odds. When he read that a teaspoon of soil contained a million organisms, he was so intrigued that he dropped his usual summer plan of mountaineering to try organic farming. When the old-timers using chemical fertilizers began asking how he was able to grow certain vegetables, he realized that organic growing was probably easier.

“It turned out that organic farming was so simple,” he says. “I’m not buying anything. The world’s best fertilizer is compost, which you can make for free, from waste products, in your own backyard.”

A year later, Coleman quit his college teaching job and headed to Harborside, Maine, where the Nearings sold him and his wife, Barbara Damrosch, 40 wooded acres for $33 per acre, the same price they had paid for it 20 years before. He chopped down trees, removed stumps and built a one-room house for $700. In 1970, a Wall Street Journal article featured the couple growing 80 percent of their own food and living on $2,000 per year.

Coleman loved talking to his new neighbor and mentor. “It was like college all over again,” he says. “Here was a man who had debated Norman Thomas, survived a trial by the U.S. government in 1917 for writing an anti-war pamphlet and run for the Senate in New York City on the Communist party ticket. Man, this was pretty good if you liked ideas, and I loved ideas!”

In 1974, Nearing offered to pay Coleman’s way to the second European organic farming conference. It was a turning point. Although there were no models for small farming in the U.S., the small farming tradition never died in Europe. There, among other things, Coleman visited the farm of Louis Savier.

“It wasn’t until I stood in Savier’s garden that I realized how well it could be done,” he writes in The Winter Harvest Handbook (2009), his third landmark book about organic growing and the four-season harvest. “Quality was everywhere: the organized layout, the tidy, closely spaced rows, the ranks of cold frames and hotbeds, the dark chocolate-colored soil and, most especially, the crops glowing with health.”

On another trip abroad Coleman saw his first mobile greenhouse, a concept he now calls the “best new (or actually rediscovered) gardening idea of the 21st century.”

Rather than growing summer vegetables like tomatoes in the winter in a heated greenhouse, the notion is to grow winter vegetables such as spinach and carrots in the same ground he uses in the summer. The issue is light, not temperature. Since there is less light in winter, the vegetables simply take longer to grow. It’s less about growing food than harvesting food year-round. The goal is to eat fresh produce throughout the year.

“It’s a different arrangement of time and a different appreciation of quality food,” he says. “We’ve managed to turn winter from deprivation to celebration.”

Although Coleman is a market grower, his Four Season Farm in Harborside is also experimental. Early on, he explored questions such as why beets grow better in soil tilled with seaweed while cabbage thrives in soil tilled with autumn leaves. (He sent soil samples to a lab at the University of Maine to find out what the differences are.) He has also dreamt up new tools—better hoes, small electric tillers, tools for working the soil at various depths, different ways to put crops in the ground, alternative transplant systems. He has given the ideas away, just to get them out there. “I am using techniques now that I didn’t even dream of 20 years ago,” he says. “I am succeeding at things I failed at 10 years ago.”

In these ways, Coleman is helping make the small organic farm a viable enterprise—the first step, he says, to changing the world. “It is very difficult to control people who can create products without purchasing inputs from the system,” he says. “Fertile soil has the power to make the small farm far more independent of purchased inputs and even more independent of the corporate world.”