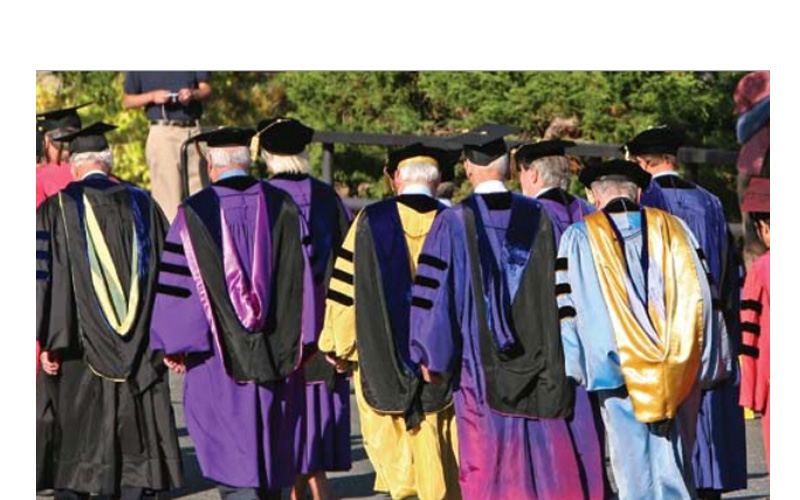 Stories We Tell About Who We Are

Williams » Today: Magazine » Winter 2011 » Features » Stories We Tell About Who We Are

In addition to honoring the accomplishments of the Class of 2011 and alumni Bicentennial Medalists, this year’s Convocation featured the induction of Adam F. Falk as Williams’ 17th president. “We learn a lot about ourselves and our communities through the stories we tell about who we are,” Falk said during his remarks. “These stories are important not because they represent the only true history, but because in returning to them we are choosing what we wish to reaffirm in our identity.”

The following pages offer only a glimpse of the three-day celebration. The rest can be found online at http://alumni.williams.edu/2010bicentennialmedalists and http://president.williams.edu/.

Liberal arts ultimately should teach you to appreciate that there are many different ways of arriving at truth. … One would have to celebrate diversity because you also begin to understand that different folks from different backgrounds will bring different things to the College … that also represent excellence in the search for truth. … I look at those who have won Bicentennial Medals ahead of me, and they’re my cohorts. And I’m very happy to see the people who are celebrated. … It’s people who are making a real contribution. It’s a lesson that’s being sent to the students about what Williams wants them to see as the value of a Williams education. … It’s important to have these pieces of affirmation for students so they see that the diversity actually is celebrated … and that it’s important to the College that people of many different fields make many different contributions.

In President Falk the faculty have and recognize someone who not just understands what animates our work, but who embodies and supports that which we value.

I had a tutor who was a young physicist … working in a new area of physics called atomic beams. He told me about the possibility that you might be able to use this technique to make an atomic clock which was so accurate that you could see the effect of gravity on time. … I’m not talking about the fact that a grandfather clock will run slower if you take it up a mountain because gravity is less. I’m talking about the fact that time itself is different in different gravitational fields. I joined the experimental group of Norman Ramsey. And he had an idea for a new type of atomic clock … the hydrogen maser. … Eventually we made the maser … and it is the basis of a much better type of atomic clock. … One of the things we had not anticipated when we started out on this line of research was that anything useful would come out of it. Our interest was in Einstein’s gravitational theory, his general theory of relativity. And a theory that is more remote from everyday activities and the uses of mankind would be difficult to name. Nonetheless, out of that something very practical did come, which is the global positioning system. … So here is this huge payoff from something which was totally useless.

Your passion for teaching and learning; your exceptional ability to listen, collaborate, and synthesize; your commitment to inclusion; your courage to take a calculated risk; and your long record of accomplishment all promise a good match for Williams—a powerful alignment of person, place and purpose.

—Gregory M. Avis ’80, chairman of the Board of Trustees, prior to conferring the College charter on President Falk

My first day was so eye-opening for me doing this work. I saw … drugs and alcohol abuse. Teen pregnancy. Undereducation. School truancy. Domestic violence. Random violence. … At the same time I saw firsthand what makes a Boys and Girls Club so unique and so powerful. … It’s the sense of hope, opportunity and the sense of community it provides for every single kid who comes in the door—black, white, Latino, Latina, Asian, physically or mentally challenged … every kid is treated the same. And the reason the clubs work so well and provide this open opportunity is through … human relationships that really have sustained all of us since the day we set foot on the earth and … have made the Boys and Girls Clubs such a viable part of this country for 150 years.

—Bicentennial Medalist Joshua M. Kraft ’89, president and CEO of the Boys and Girls Clubs of Boston

Consider a word like nature. To what does it refer? Trees and sky? Lions? Wolves? Bats? What about dragons and unicorns? “Well, they aren’t part of nature,” you say. “They only exist in the imagination.” Is the human imagination a part of nature? What about cities and computers? “No, they’re man-made.” Well what about a vegetable garden? Is that man-made? Does nature itself have any environment? … In other words, is there anything not contained in nature? If there is nothing that isn’t nature, then how can we identify what it is as different from something else? … These are not easy questions to resolve … but they do illustrate that we could talk about nature for some time before we realize that we each might be talking about something quite different. … I don’t know what you know, and I don’t know what you don’t know. … It seems like such an obvious fact that we can’t be aware of what we’re not aware of.

—Bicentennial Medalist William H. Eddy Jr. ’49, wildlife conservationist, reading from his book The Other Side of the World: Essays and Stories on Mind and Nature

Williams has a rich history of students getting involved. Look around you. There are women in this room. Students. We don’t live in fraternities anymore. Students. Some of you were junior advisors, studied abroad, served on student-faculty committees. Students. Students have shaped this campus into what it is today. And Williams has let them.

—Christopher F. Giglio ’89, president of the Society of Alumni

We are captivated by your energy [President Falk], as well as by your interest in embracing Williams traditions while searching for new and innovative ways to provide students with the finest liberal arts education in the world.

President Falk, we are excited that you will be leading this fine institution for years to come, and we hope that you see students as your greatest allies. So if you are good to us, we will be good to you—nine times out of 10. At the end of the day, we eat here, we sleep here, we grow here, we mature here, and even though we only spend four years here, our experience after we leave will forever become part of our lifelong narrative.

If there’s a theme to my work or a metaphor it’s … helping people consider how a small gesture that they do in the world ripples out and continues to have influence. … The way that you encounter [my art] is you have to start doing things to see what happens and then testing your actions. … Asking, “What happens if I try this, what happens if I try that?” is a really important position to put people in and something we don’t ask enough as adults in our culture, to think about how we’re part of this larger system. … Another over-arching theme … is helping people think about our physical selves and how critical that self is to how we move and interact with each other. … When I came to Williams I … thought I would probably be a biology major. I did a lot of classes in the environmental science concentration because I was really interested in systems and how geology and chemistry and biology and meteorology and people’s use of spaces all worked together to create our environment around us and how we imagine ourselves interacting with that nature, however we define it. But the art classes I was taking were actually what really challenged me the most.