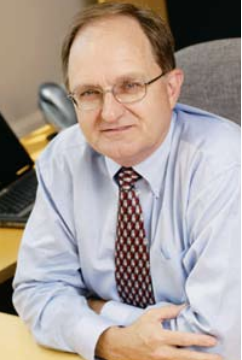 As the final step in a realignment of senior administrative responsibilities across the college, President Adam Falk has named Frederick Puddester of Johns Hopkins University to the newly created position of vice president for finance and administration, starting July 1.

After spending two decades in Maryland State government, including four years as secretary of budget and management, Puddester in 2000 was named executive director of budget and financial planning for Johns Hopkins University, responsible for developing the university-wide budget and its five-year fiscal plan. In 2007 he became senior associate dean for finance and administration at the university’s Zanvyl Krieger School of Arts and Sciences, which Falk led as dean from 2006 to 2010. In that role Puddester redesigned the budget process to make it more open and increase the engagement of department chairs, enhanced faculty input into the design of capital projects and laboratory renovations and established a student-driven sustainability capital program.

At Williams, Puddester will be responsible for all aspects of the college’s financial resources, with the exception of investment management. His appointment—coupled with a change in responsibilities for current Vice President for Operations Stephen Klass, who will become vice president for campus life—will strengthen the system of faculty governance already in place and allow professors from a wider range of disciplines to serve as dean of the college, dean of faculty and, especially, provost.

Calling the realignment a way to “add some net bandwidth to the governance of the college,” Falk told the Record in May, “I think everyone’s job is going to be more coherent and more rewarding.”