Is she a wealthy and beautiful matron? A spirit of the dead? A genomic mess? Three professors offer their perspectives on a Roman bust on view at the Williams College Museum of Art as part of Labeltalk 2011: Art of the Ancient World, which closes July 13. 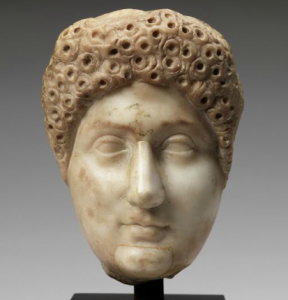 Oh gods. Something is most strange here. Where are the lamps that let me see you? Surely this place is most unnatural; I smell nothing. And you—your, your hair! Tell me mine is still fresh and coiled. Have you taken a vow or been enslaved to have such locks? And you, sir, where is your beard? Have I awoken in a foreign land? This hushed babble does me no good. Let me sleep again. Dis manibus.

Diminutive time traveler, I wonder what colors your cool, cool smoothness sported, where you perched. Your blank eyes neither accuse nor, truly, inquire, though I fret about both possibilities. Did you so animate the dead with tales of speaking statues in your temples? I’ll not conjure you again.

That’s some hairdo—could you have had uncombable hair syndrome, also known as pili trianguli et canaliculi [OMIM #191480; autosomal dominant], or maybe you had Naxos disease, causing curly hair and cardiomyopathy, first described in a family from the Greek island of Naxos [OMIM #601214; autosomal recessive, on chromosome region 17q21]?

Or maybe you just had an overzealous hairdresser…

And where are your eyes?!—aniridia [OMIM #106210] due to a mutation in PAX6 on 11p13; in 1995 it was discovered that if this gene is overexpressed in fruit flies, they make extra eyes—not that that can help you now…

And your head is very small by human standards— microcephaly [OMIM #608716; autosomal recessive, on 1q31]. Your marble image looks a little battered, but your genome is a REAL mess!

This small, marble head depicts a Roman matron of the first century CE. She is portrayed in an idealized fashion with smooth, youthful skin and an aquiline nose. Her most distinctive feature is her elaborate coiffure, a tall pile of undulating curls, which rises from her forehead like a crown. This hairstyle was popularized by the empress Domitia in the 80s CE. By imitating the empress’ hairstyle, our matron demonstrates her keen fashion sense while simultaneously advertising her loyalty to the empire. A hairstyle of this complexity would have taken a great deal of labor to maintain, which suggests that our matron was also a woman of some financial means—or at least wished to be perceived that way! The diminutive size of her portrait is most in keeping with a funerary bust displayed in a mausoleum or household shrine. This image is, therefore, a direct reflection of how our anonymous Roman matron hoped to be remembered by posterity—as wealthy and beautiful, refined yet intensely loyal: an ideal Roman woman.