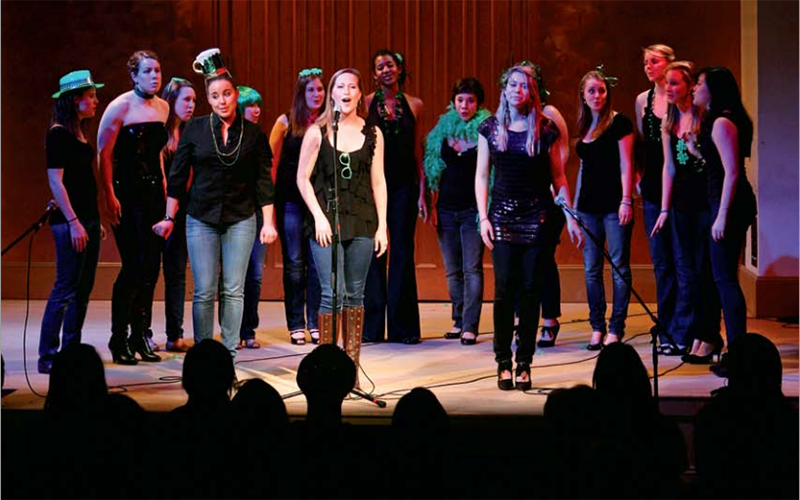 Williams student groups are like quarks. They come and go so quickly that it’s nearly impossible to keep a current list. From the Gospel Choir to the Garfield Republican Club to the South Asian Students Association to the Springstreakers, they express every contemporary student interest, talent and affiliation, but no discernible trend—with one grand exception.

With deep Williams roots, and until recently a somewhat retro reputation, a cappella is big—and getting bigger. Of a record eight groups on campus this year, four have been created since the 1990s. The newest group, the Aristocows, debuted just last fall.

Why so many groups? Why now? Are Williams students more susceptible to pop-culture prompts (think Glee) than most are willing to admit? Are we seeing a backlash against technologically enabled entertainment—a return to “make your own fun”?

Who knows? And, really, who cares? The point is that at Williams lots of informal, vocals-only music is being made across a range of styles and attitudes. Much of the fare is contemporary. The all-female Accidentals sing hardly anything that pre-dates James Taylor, leaning more toward Taylor Swift. Good Question (whose male and female members performed a concert in respective drag last spring) ranges from the Beatles to Michael Jackson to Katy Perry. The Octet—which continues to perform venerable Williams songs and jazz numbers dating back to its 1940s birth—has added rock, pop and hip-hop to its set list. The Elizabethans, founded in 1993, counters all this “currency” with Renaissance music (sacred and secular), folk songs, spirituals and a classical repertoire that tends to draw an older though no less appreciative crowd.

The students work hard, and it shows. The Ephlats, for example, rehearse six hours per week and even more when they’re getting ready to tour over spring break, says outgoing president Elizabeth Bingham ’11. Arrangements can be ambitiously complex, like The Octet’s version of R.E.M.’s “Losing My Religion,” in which performers mimic every bit of the original, from opening acoustic guitar jangle to ticking cymbals on the bridge and a convincingly heavy bass line.

But many things beyond music matter at least as much—fashion, for instance. The Elizabethans don period garb for performances. Ephlats sport formal wear for formal gigs, jeans and “hot” for informal concerts. Springstreeters wear suits to their end-of-semester concerts and believe that button-down shirts, matching shoes and a belt are “always a good start” for other shows. The Octet’s dress code ranges from “Oc-casual” (button-down shirts, jeans, “fresh/nice” shoes) to “Oc-formal” (blazers, ties, khakis). Good Question is contemplating matching tracksuits; Ephoria’s members snag each others’ apparel at a springtime swap.

In 1940, Glee Club president Warren Hunke ’42 was asked by director Bob Barrow to organize an eight-man subset to introduce a lighter touch by performing a few popular tunes during Glee Club intermissions. (Barrow perhaps was inspired by the venerable Yale Whiffenpoofs, founded in 1909.) The Octet was Williams’ only a cappella group until fraternities began forming their own octets after World War II, with interfraternity competitions judged by the young art history professor Whit Stoddard ’35. This lasted only a few years, “mostly because the
fraternity men didn’t necessarily make the best singers,” recalls Hank Flynt ’44, former financial aid director and an a cappella aficionado. The Octet took a hiatus in the early 1950s when the campus embraced the Dixieland jazz craze (e.g., Phinney’s Favorite Five and the Spring Street Stompers). Despite the Octet’s reemergence in the 1970s, the Ephlats, formed in 1956, are officially the longest continually running a cappella group on campus—”and also the best-looking group, by popular opinion,” says outgoing president Elizabeth Bingham ’11.

Road trips are another binding tie. Most groups get off campus each year, often singing to alumni in return for food and lodging. Ephoria usually does the New England college circuit; the Springstreeters drive to South Carolina, then work their way back north. The Accidentals did an Amherst/Trinity/Dartmouth loop in the spring; the Ephlats ran across to Lake Placid then down to New York City in the winter and all around Florida (Fort Lauderdale, Miami, Naples, Palm Beach) over spring break. Harkening back to the days when women’s colleges hosted rambling all-male Williams groups, the all-female Accidentals hosted the all-male Dartmouth Cords in fall 2009. (A Dartmouth singer fell asleep against an Agard fire alarm, recalls an Accidental, “forcing us all to leave the party.”)

A handful of Williams a cappella singers graduate into singing careers. Sebastian (“Seb”) Arcelus ’99 made his Broadway debut in Rent, and a fellow Springstreeter, Sony recording artist Leehom Wang ’98, performed in the closing ceremony of the Beijing Olympics. For the most part, though, what’s accomplished by Williams a cappella groups occurs in the undergraduate moment, when what really matters are the relationships engendered and later cherished. As Rachel Durrant ’13 of the all-Disney-tunes Aristocows puts it, “Fourteen people coming together to sing songs most of us grew up with [is] a beautiful thing! The atmosphere is very relaxed, and we’re free to be as silly as we want to be in front of each other. … It’s really amazing to see the growth that has taken place in some people, and it’s been awesome to discover hidden talent as well.”

“Not Your Daddy’s A Cappella Group” is the tag line on a seemingly abandoned website for this Williams “mockapella” group—more an exercise in guerilla theater than a singing group per se. Waterstreeters co-founders Mike Leon ’11 and Isaac Nicholson ’11 recount the time they kidnapped an admission tour guide in this video clip.

A decade ago four professors—Daniel Aalberts in physics, Dick De Veaux in statistics, Elliot Friedman in psychology and Tom Smith ’88 in chemistry—founded Diminished Faculty, which performed barbershop quartet numbers along with standards like “Lulu’s Back in Town.” Aalberts had sung in an undergraduate MIT a cappella group, and Smith had been in the Springstreeters and Ephlats as a Williams student. De Veaux has a long history with music and dance. When Friedman, a baritone, left for the University of Wisconsin in 2004, his co-singers tried to carry on. “We have a few numbers that we try to do with three-quarters of the parts,” says Smith, who was hoping to get the trio together for a surprise appearance in his organic chemistry class in the spring.

Watch a host of Williams a cappella performances. And check out “A Cappella Rehabilitation,” a video made in honor of The Springstreeters’ 25th in 2006.