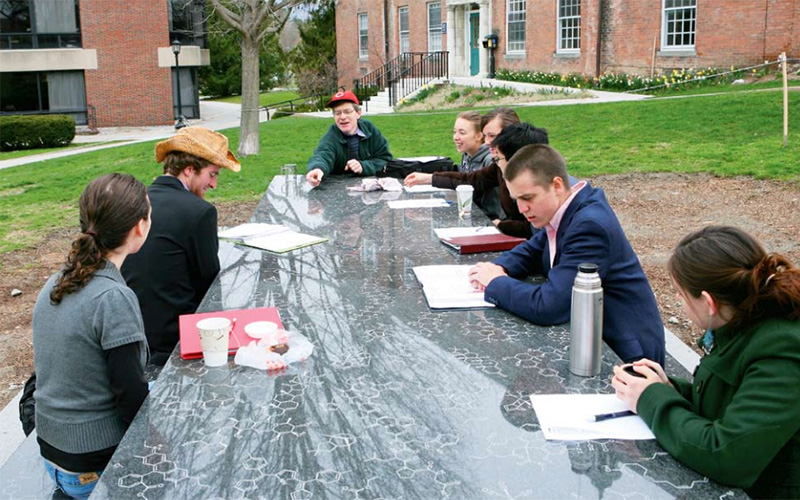 Of all the books lining the shelves of beloved chemistry professor Hodge Markgraf’s ’52 office in Bronfman, only two dealt with subjects outside of his field of study. Both were monographic volumes on the art of Jenny Holzer.

Holzer is known the world over for using language to engage and provoke. Her texts have been projected on massive gallery walls, broadcast in bands of LEDs, coalesced into giant walls of light in public outdoor spaces and printed on posters.

Markgraf encountered one of her large-scale works late in life, while traveling in Germany. Fascinated, he began corresponding with Holzer—herself no stranger to Williams as a past honorary degree recipient living and working in nearby Hoosick, N.Y., and married to artist and studio art professor Mike Glier ’75. The chemist and artist became friends, and Markgraf began working to have a piece by her commissioned for the campus.

When Markgraf died in 2007, students, alumni and friends picked up where the “chemist who talked like a down-to-earth poet,” as he was known, had left off. With the help of chemistry professor Jay Thoman ’82 and several students— primarily Charles Seipp ’11—who lent their drawing, computer and proofreading skills, Holzer assembled a collection of 715 molecular diagrams representing water, the gypsy moth pheromone, DDT, ethanol, components of chocolate and more.

Individually, the structures are graphic metaphors for much larger concepts about war, love, natural phenomena, emotion, pleasure and pain. Taken together, and sandblasted over nearly every surface of a 16½-by-4-foot stone table and four benches, the overall effect appears much like stellar cartography. Just days after the piece was installed in the Science Quad in April, Thoman, who is the college’s J. Hodge Markgraf Professor of Chemistry, took advantage of the decent weather to hold his thermodynamics class outside, at the table Markgraf helped to inspire.