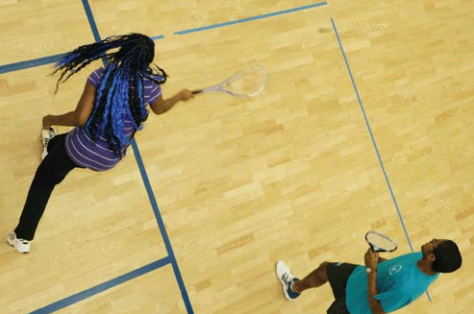 A sport long associated with a tiny subset of America’s elite helps to change the lives of inner-city kids. 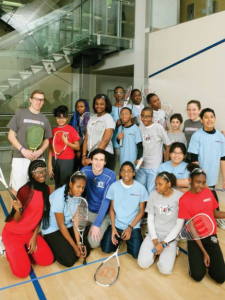 Amid the cacophony of squeaking sneakers, the pock-pock-pock of hard-hit balls and the clamor of adolescent voices, the three Williams alumni construct a chain of learning moments. Henze organizes the entire 8th-grade group into a fitness drill—a relay race of sorts—around mini traffic cones. Maruca (in ragged sweatpants and an eponymous shirt left over from his Williams days) hits volleys to a boy clad entirely in black. Two 6th graders stand reverently outside a court where Daequan Leslie, a 12th grader accepted early decision at Franklin & Marshall College, hits rail after perfect rail.

Upstairs, in one of the four sunny classrooms adjacent to the courts, Lovaas has printed out a five-paragraph essay titled “Skateboards and Bikes in Public Places” in large type, cut it to ribbons and pasted the pieces on the wall. Students take turns trying to put them back together in proper order, learning about topic and supporting sentences in the process.

The organized chaos adds up to a typical day at StreetSquash, an intensive enrichment program combining academic tutoring, athletic instruction and healthy doses of community service and college preparation that serves about 160 Harlem kids each year. The theory behind it, says Henze: The more engaged the kids are, “the less vulnerable they’ll be to other temptations.”

“I’ve gotten to see these students come a very long way,” says Maruca. “When I started here, there was a kid who was very talented in squash but a very poor student—hyperactive, attention-starved. Now he’s a leader in the program.”

StreetSquash is one of nine “urban squash” programs nationally that, over the course of 14 years, have served more than 1,000 youngsters, mainly from impoverished families, failing schools and dangerous neighborhoods. The programs’ results are remarkable: Every one of the participants has graduated from high school. Ninety-three percent have graduated from college.

Urban squash traces its roots back to Greg Zaff ’84. As Williams’ top player and a three-time All-American, Zaff played professionally for seven years and was ranked among the top squash players in the world. He loved the sport but eventually developed a case of socioeconomic claustrophobia. “We’d be playing in Detroit or Philly or Boston,” Zaff says, “but we were all Ivy/Williams types doing something completely disconnected with the cities surrounding us.”

Zaff retired from the circuit and enrolled in the master’s program at Harvard’s Kennedy School of Government, where he wrote a term paper about creating an urban squash program. His thesis—that an “upper-class” sport could provide a pathway to success for inner-city kids—was counterintuitive, but some facts were in his favor. Because they’re used by such a tiny population, says Zaff, “squash courts sit vacant in every U.S. city, 365 days a year.” The game itself—an individual sport played by members of a team—requires a particular kind of discipline and accountability. And that kind of discipline, nurtured and applied to squash, schoolwork and service, might help kids with limited resources achieve more than they ever imagined.

“It’s really simple,” Zaff says. “I wanted to help inner-city kids … and literally the only thing I had to offer was squash.”

After brief, frustrating stints at a public housing finance agency and a large inner-city school district, Zaff decided to take his notion beyond academic discourse. In 1996, he held a series of clinics at James P. Timilty Middle School in Roxbury and Charles G. Harrington School in Cambridge. He chose 24 students based solely on the effort they seemed prepared to commit. He’d pick them up from school and bring them to some old courts at Harvard. After some experimentation he settled on a program that engaged players three times per week in structured activities that included squash, academic enrichment, community service and mentoring. He called the program SquashBusters.

All of the original players graduated from high school, and 20 matriculated at four-year colleges. SquashBusters moved into permanent digs on Northeastern University’s campus in 2003, the year Zaff received a Bicentennial Medal from Williams for his work. Today SquashBusters serves 120 greater-Boston students in 6th through 12th grades. 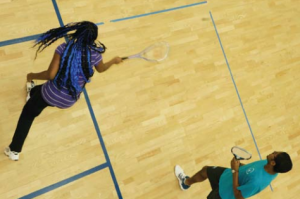 “The program was like a second home for me,” says Patrick Williams, who grew up in the Mission Hill area of Roxbury, Mass. Selected when he was a 6th grader at Timilty, he attended SquashBusters three times per week until he graduated from high school. Now he’s captain of the squash team and president of the senior class at Bates College. SquashBusters, he says, “kept me off the street during some of the worst times to be outside, like after school from 3 o’clock to 7 o’clock.”

Word of the program’s success spread through the close-knit squash community. George Polsky, a member of the U.S. squash team that Zaff captained at Israel’s 1988 Maccabiah Games, went on to found StreetSquash in Harlem. Former professional players in Baltimore, the Bronx, Chicago, Denver, New Haven, Philadelphia and San Diego followed suit. The programs now fall under the umbrella of the National Urban Squash and Education Association (NUSEA), founded in 2005 by Zaff, Polsky and executive directors of two other urban squash programs.

Urban squash continues to grow, with new programs coming on board in Detroit and Minneapolis. Homegrown efforts in Oakland, Calif., and Charleston, S.C., have received NUSEA support and will be able to apply for membership in upcoming months. Zaff, who left SquashBusters in 2005 to run NUSEA full time, expects another 10 programs to launch in the coming decade.

One reason for the rapid expansion is urban squash’s track record of getting at-risk kids through college. Another is money. It cost about $10 million apiece to build the facilities for SquashBusters (which shares its courts with Northeastern University as part of a 50-year deal) and StreetSquash (which shares its courts with Columbia). Most of that money came from wealthy former college squash players delighted to help kids from low-income families while introducing the sport to a wider audience. Traditional squash centers in higher education have also anted up. At Williams, for example, squash coach Zafi Levy ’01 organizes a professional tournament each April to raise funds for a street squash tournament held at the College each June.

To a remarkable degree, urban squash’s rise has been a collective Williams effort. (Polsky, a Harvard grad, calls it “downright scary.”) Former Williams players Lenny Bernheimer ’63, chairman of SquashBusters’ board, and Bill Simon ’73, a Williams trustee who chairs NUSEA’s board, have supported Zaff’s efforts from the earliest days. They’ve also worked closely with alumni like Mike Keating ’62, another Williams trustee and former college squash player, to raise funds for SquashBusters’ facility at Northeastern. Dozens of Ephs volunteer as coaches and tutors. Last fall Megan Henze ’05, who serves with classmate Joanna Leathers ’05 and four other Ephs on the StreetSquash Young Leadership Committee, collected $5,000 in donations for the program while running the New York Marathon with Kate Whipple ’07 and Ashley Eyre ’08.

Squash Haven, a NUSEA program created in 2006 in New Haven, Conn., is directed by former Williams women’s tennis and squash coach Julie Greenwood ’96. Her program serves 50 students in 4th through 9th grades, and she’s adding a new class each year. Her students use Yale University’s courts, and the university has donated exclusive use of classroom space and a small office. Yale players coach Squash Haven students, and 30 volunteers are academic advisors.
As with all NUSEA programs, Squash Haven selects its students based on their potential for sustained commitment to the program. This year, Greenwood took only 12 from a pool of 40 applicants. “We think our kids are capable, and we set a high bar,” she says. “We’re looking for a six- or seven-year commitment from each of them, and we make an even longer commitment in return.”

That commitment extends into college and beyond. Having worked with juvenile offenders on Rikers Island and at the Harlem Children’s Zone, Jess Lovaas now serves as director of alumni outreach at StreetSquash in Harlem. She shadows graduates through college matriculation and financial aid mazes and continues to work with them once they’re in college to make sure they have the resources and support they need. 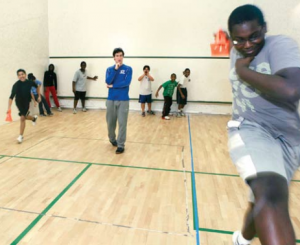 It turns out relatively few graduates of urban squash programs go on to play competitively in college. The exceptions are Patrick Williams and four players on the women’s team at Bates, as well as a handful of others at colleges like Franklin & Marshall. But “squash is not and has never been the magic bullet behind urban squash,” Zaff said upon receiving the Manhattan Institute’s 2010 Social Entrepreneurship Award. “The real keys are serving young people, day in and day out over many years of their lives, having the highest expectations of everyone, especially yourself. … People, especially the kids, catch your drift quickly and rise up to be unreasonably committed with you.”

With an estimated 61 million children under the age of 18 living below the poverty level in America, urban squash admittedly is a small drop in a very large bucket. But it’s still a pretty powerful drop, says Ed Haldeman, CEO of Freddie Mac and a former NUSEA board member. (He’s also the father of Matt Haldeman ’02, a SquashBusters board member.) Mass interventions, Haldeman says, can be like “thin-spread peanut butter. I think we also ought to help individuals in a very deep way.”

“NUSEA is a ‘business’ model that is people intensive,” says Bill Simon. “It doesn’t impact millions of people, but it has a profound impact on a few individuals’ lives.”

Take the impact SquashBusters had on Patrick Williams, who says Greg Zaff “taught me more than I can say. When he would get on the court with me, he always told me to ‘volley the ball, Patrick.’ Now that may be on the court. However, I see that as something more like, ‘Take opportunities when they are in the air. Don’t let them crash down around you.’ … Greg truly is the man.”

Rob White is the College’s deputy director of communications for alumni relations and development. 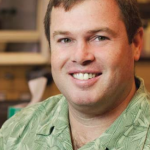 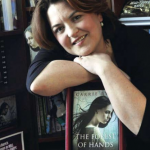 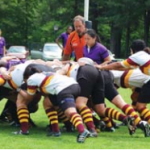 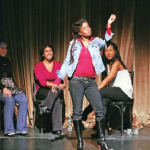