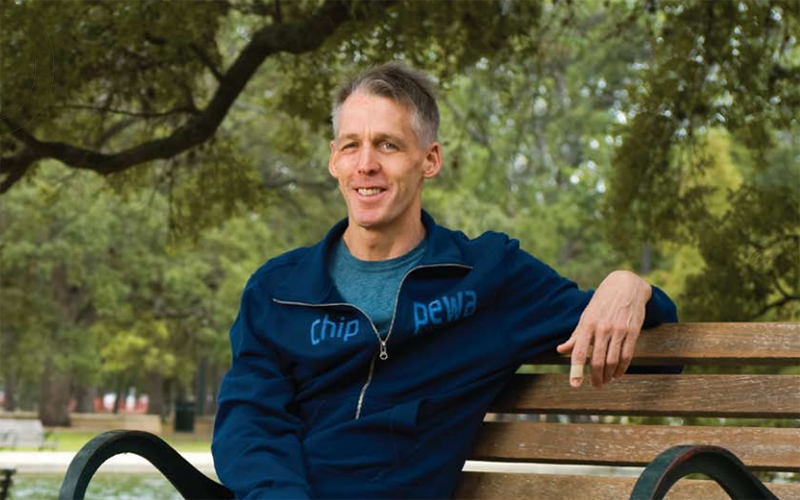 Williams » Williams Magazine » Winter 2010 » Features » Friend of Hermann Park
Thanks to Chris Knapp ’84, the century-old dream of an urban oasis in Houston has finally been realized. And the result rivals the parks of even the greatest American cities.
by Jim Mulvihill

As the most entrepreneurial of cities—a place where zoning is regarded as a conspiracy against capitalism—Houston is rarely lauded for its scenery. The nation’s sixth-largest metropolis has plenty going for it, including being home to the most Fortune 500 companies in one place outside of New York. But in the rush to make money, its citizenry has never given much thought to aesthetics.

Contrary to popular belief, though, there are many trees in Houston. And, thanks to Chris Knapp ’84, there is even a central urban green space—Hermann Park—to rival those in cities like Chicago and Boston.

Knapp, a Houston native, has been a lead fundraiser for the Hermann Park Conservancy since 1997, helping to transform an overlooked and overgrown mosquito refuge into a 445-acre oasis. With a dedication to volunteerism instilled by his father (David H. Knapp ’60 passed away in January 2009), a keen aesthetic sense honed as an art history major at Williams, a long and successful career in asset management and a love of history that helped him see potential where others might not, Knapp was the perfect man for the job.

“The transformation from this nasty, yucky ditch with its stagnant water—not even ducks went in it because it was so vile—Chris believed in it before anyone else did,” says Kim Sterling ’80, founder of Sterling Associates, a fundraising consulting firm that worked closely with Knapp through the first phase of the redesign, completed in 2003. “Ten years ago,” Sterling adds, “people in Houston just didn’t think about spending their money on parks.”

Knapp has helped potential donors visualize the park the way it was meant to be, back when the city first retained Cambridge, Mass., landscape architect Arthur Coleman Comey to create a parks plan not unlike Boston’s “Emerald Necklace” in 1913. At its center was a natural urban refuge in the spirit of New York’s Central Park or New Orleans’ Audubon Park. The tract of land mapped out by Comey belonged to George Hermann, one of Houston’s first parks commissioners, who upon his death in 1914 bequeathed 285 acres to the city with the stipulation that it always be used for recreational purposes. 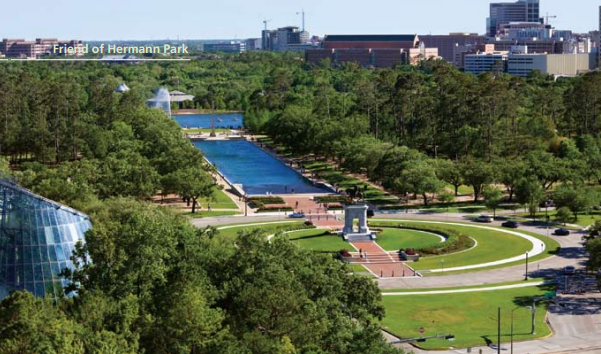 Houston “moved away from this idea of public green spaces,” Knapp says, but now the city has a 445-acre urban oasis in Hermann Park.

In 1915, George Kessler, an influential landscape architect whose projects helped define modern urban planning in the early 20th century, created a proposal for the park with many key elements that remain today, including the reflecting pool, golf course, music pavilion and miles of trails. But as the country turned its focus to World War I and the Great Depression, other aspects of Kessler’s vision were never realized.

Houston emerged from the crises to find that its identity had changed. “By the 1940s most of that civic vision for Houston was displaced in favor of aggressive expansion,” Knapp says. In 1943, voters approved the sale of 133 acres of parkland for what would become the Texas Medical Center. At the same time, major downtown thoroughfares were extended through the park’s grounds.

The city grew up quickly in the latter half of the 20th century, with the population quadrupling as opportunity abounded in the shipbuilding, petroleum, medical and aerospace industries. Infrastructure improvements, however, rarely included funds for parks.

“Houston went through a period in the ’70s when suburban expansion and annexation were primary on most political agendas, with parkland acquisition a low priority,” Knapp says. “A mayor during this period was famously quoted as saying Houston didn’t need many parks because people had big backyards. We moved away from this idea of public green spaces.”

It wasn’t until Knapp left his hometown that he saw firsthand the impact and importance of urban parks. Following in the footsteps of his grandfather Alfred ’33, father and uncle John ’73, Knapp and his twin brother Breck ’84 headed to Williams for college. After graduation, Knapp took a job with Wall Street’s oldest private bank, Brown Brothers Harriman & Co. In midtown Manhattan he watched the transformation of Bryant Park from a haven for drug dealers and the homeless to a space for revenue-generating restaurants, high-profile concerts and film series. The Bryant Park Restoration Corp., led by business and civic leaders, became a popular blueprint for urban park revitalization around the country.

Knapp took that knowledge back to Texas when he transferred to Brown Brothers’ Dallas office in 1987 and then, two years later, returned to his hometown to open an office for the firm there. When that branch closed in 1995, he remained in Houston as cofounder and CEO of Chilton Capital Management, an independent investment advisory practice and trust company that currently manages $700 million for individual and institutional clients.

Meanwhile, the Philadelphia firm of Laurie Olin, the landscape architect behind Bryant Park’s renewal, was selected in 1993 to develop a master plan for Hermann Park. The resulting strategy aimed to restore much of Kessler’s original, unrealized vision. “When I came back, I was struck by how thoughtful the vision for the city had been in the ’20s and ’30s,” Knapp says. “But it had been sacrificed in favor of, frankly, some awful, often piecemeal development. For a city with so much wealth and talent, we appeared to be doing little with it in the way of creating an exceptional urban environment.”

Knapp threw himself into raising money for what would become the Hermann Park Conservancy, a partnership with the city of Houston that has generated almost $50 million for significant improvements to the park’s design, visitor facilities, gardens and tree canopy.

“Raising money for public parks is still challenging here because people don’t understand how poorly funded green space is,” Knapp says. “There’s an important, influential segment of the population in Houston with little direct connection to the public sector beyond the water that comes into their houses. Understanding the link between a vibrant urban green space and a dynamic economy is often the first step in getting others to embrace and support the public/private conservancy model we have used so effectively in Hermann Park.”

Thanks to the Hermann Park Conservancy, the original “grand basin” was enlarged, with three islands that serve as bird and wetland refuges.

These days, the park is connecting Houstonians to the outdoors—and to one another. The “yucky ditch,” as Kim Sterling called it, was replaced with a vast reflecting pool flanked by picnic lawns, fountains and pedestrian alleys shaded by some of the park’s original oak trees. The “grand basin,” renamed McGovern Lake, was enlarged, with three islands that serve as bird and wetland refuges (the Texas Gulf Coast is one of the world’s busiest migratory bird flyways). Streets were rerouted to improve public access and lessen the interruption of green space. A miniature train was restored, the golf course renovated, and more than 3,800 new trees were planted. The revamped Miller Outdoor Theatre now hosts concerts facing a hillside picnic area, and new light fixtures and benches dot the landscape.

Perhaps the most important development, though, has been the increase in the use of the park by its neighbors. By 8 a.m. this city of workaholics is already buzzing, and the park is playing host to young joggers, senior walkers, tai chi practitioners and a smattering of folks who just like to sit and watch the world unfold before them.

“It’s the only place in Houston I know where a billionaire will be standing next to someone of very modest means,” Knapp says, “and they’re both having fun.”

Jim Mulvihill is a writer and publicist based in New Orleans.
Print this page