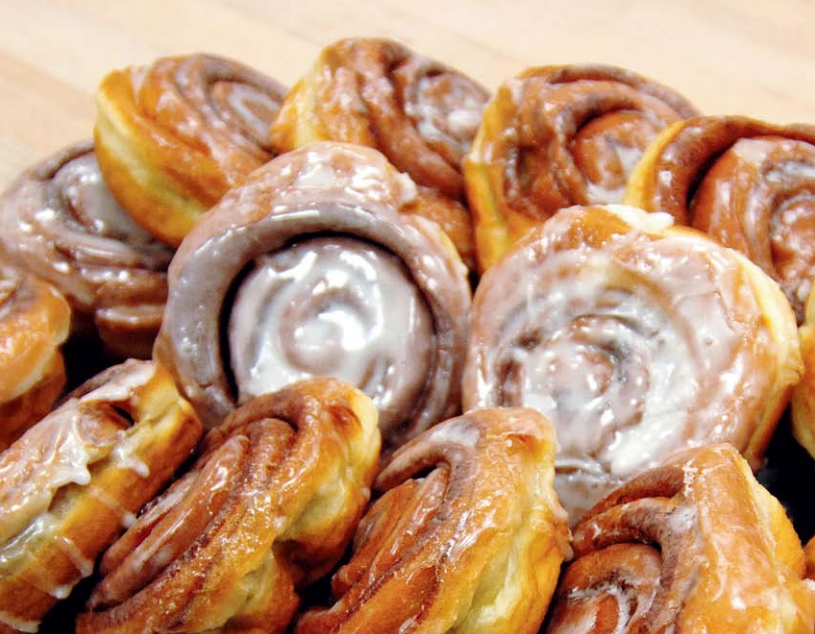 Bob Volpi, director of dining services since 2002, learned that honeybuns were “a sacred thing” at Williams during planning for the Paresky Center. The question of where the confections would be made was key in the building’s conception. Today, a room in the basement of Paresky is stocked with mixers, “dough sheeters” and a donut fryer specifically for making honeybuns. 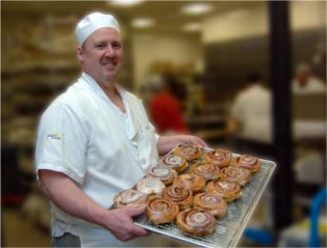 Chef Mike Walker, one of four bakers who create honeybuns in the basement kitchen in Paresky, with a finished batch before they’re sent up to the Lee Snack Bar.

Contrary to lore, the recipe isn’t a secret. The ingredients are straightforward—flour, sugar, baking powder, eggs, water, yeast. After the dough is rolled out, it’s washed with eggs and covered (not sprinkled) with a liberal amount of cinnamon before being shaped, sliced, left to proof, fried and glazed. Cinnamon is the key ingredient here, or rather the amount of cinnamon—ordered by the five-pound pail. Each year Williams bakers use 340 pounds of cinnamon. In an average week, the four bakers in Paresky make 27 (baker’s) dozen honeybuns—more than 18,000 per year.

The honeybun has an all but fabled history at the College. Alumni of a certain age still write about the treats in their Class Notes, and during Reunion Weekend the baking staff works overtime to produce triple the weekly batch to ensure there are enough to go around. Honeybuns are requested by student groups for events, and they even made an appearance in one of President Morty Schapiro’s holiday cards.

Start to finish, the process of making a honeybun takes five hours, but for just $1.25, one 480-calorie honeybun, sliced in half, buttered and grilled, can be eaten in just seconds.