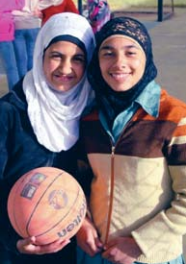 Absolutely no soccer. It will affect her fertility,” Fatima instructed us as she grudgingly released her daughter’s hand, allowing Ofal to sprint over to the rest of the girls trying on athletic shoes. It was our third week running sports camps for Iraqi refugee girls living in Jordan, so the request came as no surprise. “Of course,” we said. “Feel free to stay and watch.”

From the other side of the fence surrounding the courtyard where the camps were held, Fatima scrutinized Ofal’s every move through the small eye openings in her black burka. Though Ofal was shy at first, giggling alongside her teammates as they worked on their bounce passes, she turned out to be a natural at basketball.

The next day, Fatima eased up on her restrictions: Ofal could try shooting a soccer ball. By the end of the week, Fatima agreed to let her play in the final game. Fatima tearfully told us that Ofal never before had the opportunity to set goals as she had over the past week. She wanted Ofal to have a career—as a translator or even a professional athlete. She wanted Ofal to have a better life than Fatima herself had been given. “Mafi mushkala, no problem!” she shouted as she wound up to give us high-fives.

The idea for the camps came out of professor Magnus Bernhardsson’s course on the history of the modern Middle East, which brought to our attention the dire consequences of the 2003 invasion of Iraq. Of the 2 million Iraqis forced to leave their country, an estimated 750,000 have relocated to Jordan, a country of approximately 5.5 million people. Most reside illegally, unable to work, with some women resorting to prostitution to help their families get by. Most children do not go to school, and, worse, there is little to help them deal with the traumas they experienced while in Iraq.

We wanted to help. In thinking about the childhood experiences that had the biggest impact on our own personal development, we agreed, hands down, that they involved sports. We applied for a Davis Project for Peace grant to run sports camps for Iraqi girls living in Zarqa, a poor and populous refugee neighborhood outside of Amman, Jordan. We called our project Reclaim Childhood.

After the first set of camps last summer, we wanted to bring the benefits of sport and play to even more girls like Ofal. With the help of professor Robert Jackall, we worked with Williams parent Edward Rosenthal P’10 of Frankfurt Kurnit Klein & Selz, who donated his time to help Reclaim Childhood become a nonprofit. Meanwhile, Deborah—who deferred law school for a year to remain in Jordan—established a Saturday sports clinic and an all-girls basketball league in Zarqa.

We recently concluded our most ambitious project to date: four weeks of overnight camp at King’s Academy, an expansive boarding school near Amman, headed by Eric Widmer ’61. With the help of five Williams student volunteers and two alumni-sponsored interns, the girls have seen dramatic improvements in their basketball, volleyball, soccer and swimming skills. Add to that the unending games of samak, samak, hoot (fish, fish, shark, the Arabic version of duck, duck, goose), and we are confident that the girls have had at least a small taste of the childhood experiences so important to us.

Many people question the value of sports programs as a means of refugee relief. Our programs are only a small step toward solving a much larger social problem, but we feel it is an important and often overlooked step. Through sport, we seek to teach these young girls to be strong, to set goals, to be fair and to feel as though they can accomplish anything. The positive social values transferred through sport can help these girls to become future leaders in their region.

Watching Ofal that first summer, we couldn’t help but wonder if one day—with continued work on literacy and sport—she could be scoring goals for the Williams soccer team.

Deborah Bialis ’08, Anouk Dey ’09 and Katherine Krieg ’08 are cofounders and directors of the nonprofit Reclaim Childhood Inc. For more information or to get involved, visit www.reclaimchildhood.com or e-mail [email protected]
Print this page